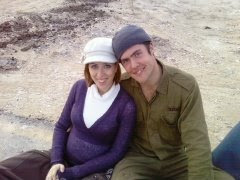 Thank you so much for the ride from the middle of nowhere to the bus stop!  You spent a lot of time with us; and when we said that we made aliyah 15 months ago, you asked:

I gave you the first answer that came to my head, about how it is the easiest place in the world for a Jew to live as a Jew.  But I could tell that you weren't satisfied by my answer.  Actually, you were part of a better answer.

We spent 15 hours, round-trip, going to visit our son.  He was experiencing a little "R and R" between fire-fights in Gaza; and we and he thought seeing his parents might boost his spirits.  "Bring books, Ema.  Stuff you don't care about.  I don't know what condition they will be in when -- if I get them back to you.  And paper and pens.  I have a new idea for a tee shirt, and all these great blog ideas.  Oh, yeah.  Ema, please bring pictures of my family."

Ask me for the moon, Soldier Boy.  Is there anything I would not bring you right now?

When we got to the Central Bus Station in Jerusalem, the young Jew at the security gate welcomed us to Israel.  When we looked a bit abashed, he said "Sorry.  I saw your 'Aliyah Revolution' button on your jacket."  (Let's face it:  this 43-year-old classic antique Liberty High School letter jacket probably screams "I'm an immigrant from America!" as loudly as any button.)  He was very sweet to us.  "Have a yishuv tov!" 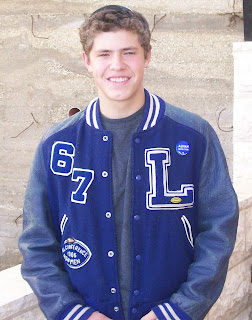 (The Stunt Man, playing mannequin to make his mother happy)

It was standing-room-only on the bus to Beersheva; but I never felt so safe traveling anywhere.  The bus was packed with soldiers, heading for the Front.  After we had stood for a while, badly, as only people this many decades old can, two sweet young soldiers gave us their seats.  The boys folded up neatly on the floor, heads resting on backpacks.  They would not need a crane to get them off the floor at the end of the two-hour trip.  We tried not to envy them.

At Beersheva, we were blessed to meet our dear daughter-in-law.  Executive Girl had been trying to get on the usual bus from Beersheva to Soldier Boy's base for the last three hours, only to be told each time that they were full, that there was only room for soldiers right now.  Without her command of Hebrew and willingness to think outside the box, we probably would have turned around and gone home.  She got us all onto a bus going to Tzomet Eshkol, which would get us "somewhere in the neighborhood, and we will figure it out from there."  Yeah, right...  She also paid for our tickets, as we were somewhat surprised that our special olim bus passes didn't work out here; and our quick stop at the ATM had not been fruitful.  (More on that later.)

A bus driver at Eshkol told us that the next bus to the base would be coming in three hours.  Waiting for another three hours to see her husband did not thrill Executive Girl; so we followed her to seek a taxi, praying that the spare change we had between us would help with the cause.  After a short while, a woman stopped for us.  She could only take us a bit further, to the turnoff toward Ofakim.  She was very sympathetic:  of her four children, two were in Gaza.  And her husband had just been called up for miluim (reserve duty).  We thanked her.  She and I gave each other many brachot, for healthy, whole children with long lives.

We walked for some distance.  I picked up fascinating agate-like rocks, and dropped them into my plastic bag.  I took pictures of interesting signs, such as "Rafiah Crossing," and "camel crossing."  One was in the news all the time; and the other you just don't see in Baltimore that often. 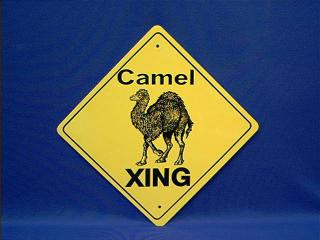 Finally, a young man in a Kangoo stopped for us.  As the Dearly Beloved and I squished ourselves into the narrow opening to the back of the car, I unwittingly dropped the bag containing the rocks and my camera onto the road.

This driver was especially sweet.  He also has a son in Gaza, so he knew the base well.  He felt compelled to tell us why he had picked us up.  "First of all, I saw these three people walking on this road, where people usually aren't walking.  And I was asking myself, 'why is a pregnant young woman walking down this road?'  And then I looked at the man -- and I asked myself, ' why is my father walking down this road???'"  It seems that the Dearly Beloved is the spitting image of this young man's father.  "I just couldn't leave my father walking by the side of the road," he said, with smiling, twinkling eyes.  As he continued to converse with Executive Girl, The Dearly Beloved and I enumerated the mitzvot and brachot he had surely earned.  ("Ahavat yisrael, kibud av, chesed la-ger...  At least!")  We dedicated them to the safety of his son.

So far, six angels, without whose help we may not have been able to make this trip.

To be continued...
Posted by rutimizrachi at 11:40

Thanks for these updates, I do really appreciate them. And "sha'a tova" to Chana!

We've all had these sorts of adventures, things like this happen here, something about Eretz Israel ...

all the best,
Lisa

wow ruti! thanks for sharing! i really enjoyed this.

Hi Rutie Reading this makes me think of what i always told the kids.Every step you take and every thought you make is a mitzvah. Your angels just made my morning. All our boys and all jews should be safe and fulfill there special missions. Baruch

Sis. I read your posts and tears come to my eyes. I'm glad we know the ending of that little story having met you at the CBS in Jerusalem.

May we see all of our sons and daughters restored to their homes and peaceful lives of service to HKBH.

Your Bro Hillel in Shiloh

Ahhhhhhhhhhhhhh. Your words are a balm of love to my neshama. I inhale them. Thank you dear sister for this beautiful post. Seeing Josh and Chana together, so happy, shining with love fills me with joy. 15 angels for your eyes...myriads all around you in the eyes of the One Who Sees All.
Much love,
Shalomis

Can't wait for the rest of the story. Your children are beautiful, Bli Ayin Harah. May
G-d keep them all safe and healthy.

Ruti,
Thank you for your blog. May Josh stay safe and whole, and all of you be well and have constant brachot. Caren and I send our love from Baltimore.

Lisacat: Amen! I appreciate your comments. Yes, it is true... living here really does allow for more opportunities to meet angels.

Baruch: Amen! I agree with you -- or at least I would agree that each is a potential mitzvah. And it seems to be more true in Israel. I say to the boys: "There are no 'stam' encounters. Every encounter with another human being is either a kiddush Hashem or a chilul Hashem."

Hillel: Amen. It was good to see you guys! Nice ending to our extraordinary adventure.

Baila: Amen! Thank you. May all of our children grow to be nice, healthy, old mitzvah menshen!

Barry: Amen, and thank you. Please give my warm regards to Caren. Thanks for reading!