Potatoes in bread is as funny as it sounds. 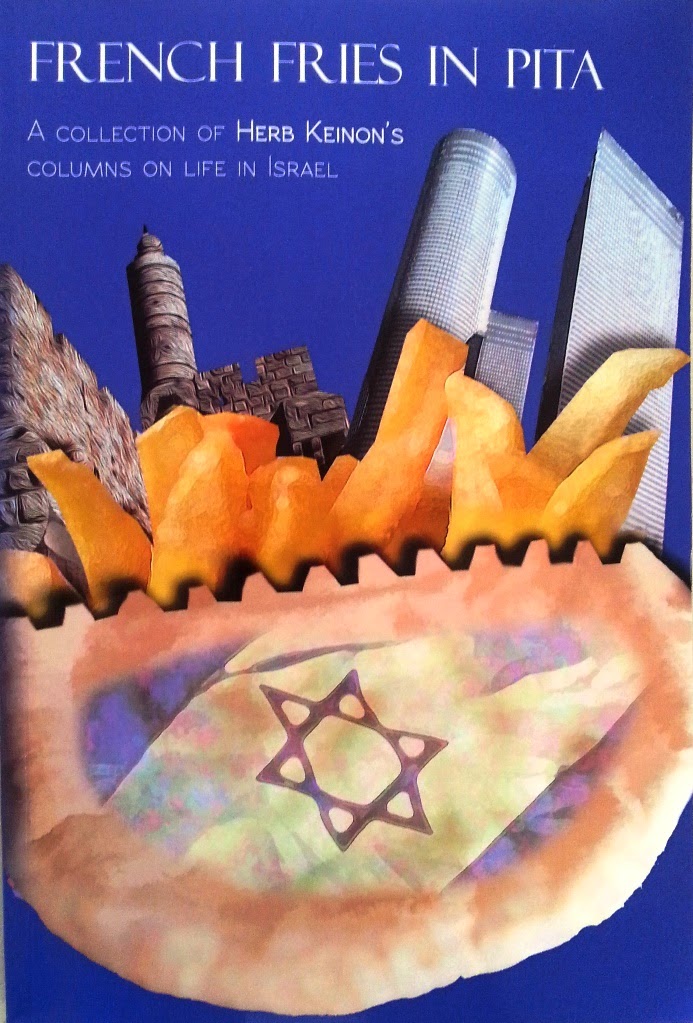 A pleasant and informed voice from the West breezed through Neve Daniel last night.

Herb Keinon hasn't lived in Denver for at least 30 years, and has made Maale Adummim in Israel his home. But when someone interjects certain kinds of expressions into his talk, I feel very nostalgic for my upbringing in the western United States.

"When someone comes up to me and says 'Can I ask you a question?', I know I'm in for a shellacking." He says it with that slightly sheepish behind-the-woodshed look that suggests he came from a time and part of the US where such an expression was common. Made me feel right at home, as did his total approach of easy-going, self-effacing humor, surrounding confidence in his knowledge of his subjects.

I've been reading Herb Keinon's political posts and life commentaries in the Jerusalem Post since our Baltimore rabbi, Rabbi Menachem Goldberger, first told us about him. Apparently, the two go back to childhood. In fact, It was Rabbi Goldberger the elder, zt"l, who gave Herb his Hebrew name of Chizkiyahu, which he never got used to using, even in Israel. "I tried going by 'Chezky' for a while, but the Israelis thought that meant my name was 'Yechezkiel.' I should have just gone by 'Yahoo.' That was back in the days before Google..." His voice trails off in our laughter.

Keinon's stories are a pleasure to read. With the style and skill he has honed after years of writing professionally, he writes about his family with humor and tenderness, but never with meanness. He spoke about why he calls his wife "The Wife" unashamedly, despite frequent shellackings from well-meaning street corner critics who assume he hasn't checked with The Wife to see if it would bother her. (This resonated with me, as I am often asked if my sons and daughters-in-law are bothered by their nicknames in my blog, and about what I write about them. It's hard not to respond with a little gentle sarcasm. "Oh, wow! Maybe I should ask them! Thank you for the tip!")

Another favorite topic in Keinon's writing is the evolution of the oleh (new immigrant) in Israel. Many of us were nodding our heads in recognition as he spoke about the attitudes with which we arrive in Israel -- our impressions of the Israelis as loud and rude and a little stupid ("Why do they leave the windows open in the winter???") -- and how we "grow up" and realize that these Israelis are the way they are for a reason, and they really aren't that dumb. ("Ohhhhhh! If you leave the windows open a little each day in the winter, you reduce the retivut, the mold, on the walls!")

Keinon spoke at some length about what a fretful people we Jews are, especially here in Israel. If there is something going on at a border, we're sure it's war. We're constantly fearing earthquakes, disease, price explosions or catastrophic drops... "If there's a silver lining, we'll look for the cloud." It was easy to laugh with him at ourselves.

After speaking a little about politics and a lot about the aliyah experience -- the main subject of his delightful new book French Fries in Pita -- Keinon shared a few impressions of some of the leaders he covered over his fifteen years on the diplomacy beat. He was surprised that the most generous interviewee was Ariel Sharon, a"h, who gave him a very long interview just after the death of Sharon's wife Lily, a"h. Sharon surprised Keinon by asking about his life. But Binyamin Netanyahu is "all business," apart from one joke about his name. When Keinon arrived for the interview, Netanyahu said, "Come in, Herbal Tea." Keinon thought for a moment, and returned, "With all due respect, Mr. Prime Minister, they call you 'Bibi,' and you're making fun of my name?" I can't remember if he said that he actually said those words, or only thought them. It would have been a great response.

During the Q & A, participants had lots of ideas about how to improve the government. In his answers, Keinon proved his point about the need to be in Israel long enough to understand the subtleties of how the political system works, even when it doesn't, and why overlays from other countries' systems simply cannot work in this very odd little country. I'm not sure all of the participants were convinced -- well, that wouldn't be Jewish, would it? -- but my sense was that his main point is very well taken. Israel is not like any other country in the world; and no other political system would be able to take all of the citizens and ideologies into account. But I suspect we'll be debating this for a long time -- at least as long as Israel keeps going to elections every two years, and as long as there are olim with opinions.

Another point brought up by a member of the audience was that hasbara -- the Israeli word for PR -- doesn't seem to be working out there in the larger world. Keinon pointed out that we are getting the message across to the United States and Canada because the people there whose support we need are more receptive than they are in other countries. Europe simply isn't interested in hearing what we have to say, at this point. While there are individuals in Europe who are very pro-Israel, the majority of the continent is currently only interested in accepting the Palestinian narrative. Dabbling in the field of hasbara myself, I am in total agreement with this point.

If you haven't been reading Herb Keinon's posts in the Jerusalem Post, give yourself a treat and start reading them. "There is no such thing as objectivity in journalism; but I try to be fair." Indeed. He is as fair as one can be (in my opinion). And entertaining, concise, and very readable.

French Fries in Pita is available at Amazon (in a Kindle edition), and at Book Depository (which delivers free to Israel) and in M. Pomeranz Bookseller, my personal favorite, because it's in Jerusalem and is my favorite book store on the planet.

Thank you to Chaim and Ruth Sherman for hosting this enjoyable talk! "What's said in Neve Daniel stays in Neve Daniel." Okay... maybe not so much. We are Har HaBloggerim, after all!
Posted by rutimizrachi at 10:07 No comments: