I wrote long ago about our first appointment at Misrad HaPnim (the Ministry of the Interior) to get our very first teudat zehut (ID card). Details: Anat, our Israeli p'kida (clerk) was not going to let us become citizens, because after the grueling question and answer session she put us through, she couldn't find the raised stamp on the Dearly Beloved's birth certificate. Finally, miraculously, she was able to feel it. (Okay, we're also old and faded...) Too much suspense. But at last, we became citizens.

While my son Soldier Boy was here for his brother's wedding, we returned to Misrad HaPnim to replace his expired teudat ma'avar (temporary travel document), and to get my very first darkon (passport). (The teudat ma'avar works just fine for the first several years; and one is permitted to renew it three times.)

First we stood for a very long time in the sun, waiting for the misrad to open, in a long line of other hopefuls. To his eternal credit, Soldier Boy did not complain, even finding ways to look at the situation in the most positive light. (I love getting to know my children as adults!) Finally, finally we went inside. I typically carry a small Swiss Army knife with me. After years of experience, I now carry the smallest, least-scary knife possible, assuming that no security guard in his right mind could possibly see this as a weapon. Today, however -- perhaps due to heightened tensions? -- the security guard removed my immature little knife from my possession, had me fill out a form to reclaim it later, wrapped it in his copy of said form, securely taped it, and locked it into a safe. Shaking my head and chuckling, I followed the ever circumspect Soldier Boy to the next line, where we were told that his document would cost 560 shekels (nearly $160 at today's rate, and more than I had on me) to replace, due to loss. That pretty well nixed the idea of both of us walking out with documents. But his was critical. I would pay for part of it, and charge the rest, if they would let me. We took our number and sat down.

I fretted for a while, and he reassured me. "What's the worst? They'll tell us we have to come back tomorrow." Okay. He was right...

After a not-too-long wait, our number appeared on the LCD display with instructions to go to Window Number 7. Having the superstitious instincts of any sports fan (or gematria maven, for that matter), we were heartened by the fact that this is the Dearly Beloved's favorite number. Who should be our p'kida? The lovely Anat! Nearly seven years later, and we got the same clerk! And I remembered her, and her name, which almost never happens for me. "Ha-shem shelach 'Anat'?" I asked, a little warily (due to my usually terrible memory). She was awed that I remembered her after all these years. I told her that we had been very grateful that she was the person who approved our citizenship, and that we had had a nice conversation about her children's artwork (no longer posted). I didn't see any need to remind her of the less-positive aspects of our first meeting.

To cut the long story short -- Anat smiled through giving Soldier Boy a lecture (or six) about no longer living in Israel, and telling us that his teudat ma'avar would cost us only 140 shekels!!! We both gratefully signed papers for his documents and mine -- all of which cost less than the original quote for his single document.

No one loves bureaucracy or bureaucrats. But sometimes if you treat them like people with lives and children and stories outside their little cubicles and annoying rules, they can surprise you by returning the favor.

Post script: As we were leaving (jubilant, because it had ended very well), we stopped at the security desk to retrieve my pocket knife. The guard finally located the very tiny package, but insisted on checking the signature on the paper wrapped around it. The knife fell out of it's paper cocoon as the guard struggled to remove the tape.

"You can use the knife to cut the tape if you want to," said Soldier Boy. The guard was offended at the suggestion. Soldier Boy -- every helpful -- opened the tiny knife and offered it to the guard. "Really. It will make it easier." The guard (rather than arresting Soldier Boy for pulling a tiny knife on him, which is what I was anticipating) made some Israeli noises that equated to "Back off, buddy. I'm in charge here," and went back to tape wrestling.

He was finally successful. But I couldn't help but think that my son needs to return very soon to Israel. We need a little good old-fashioned American ingenuity to get us through the coming years in the Middle East.

Posted by rutimizrachi at 22:54 No comments: 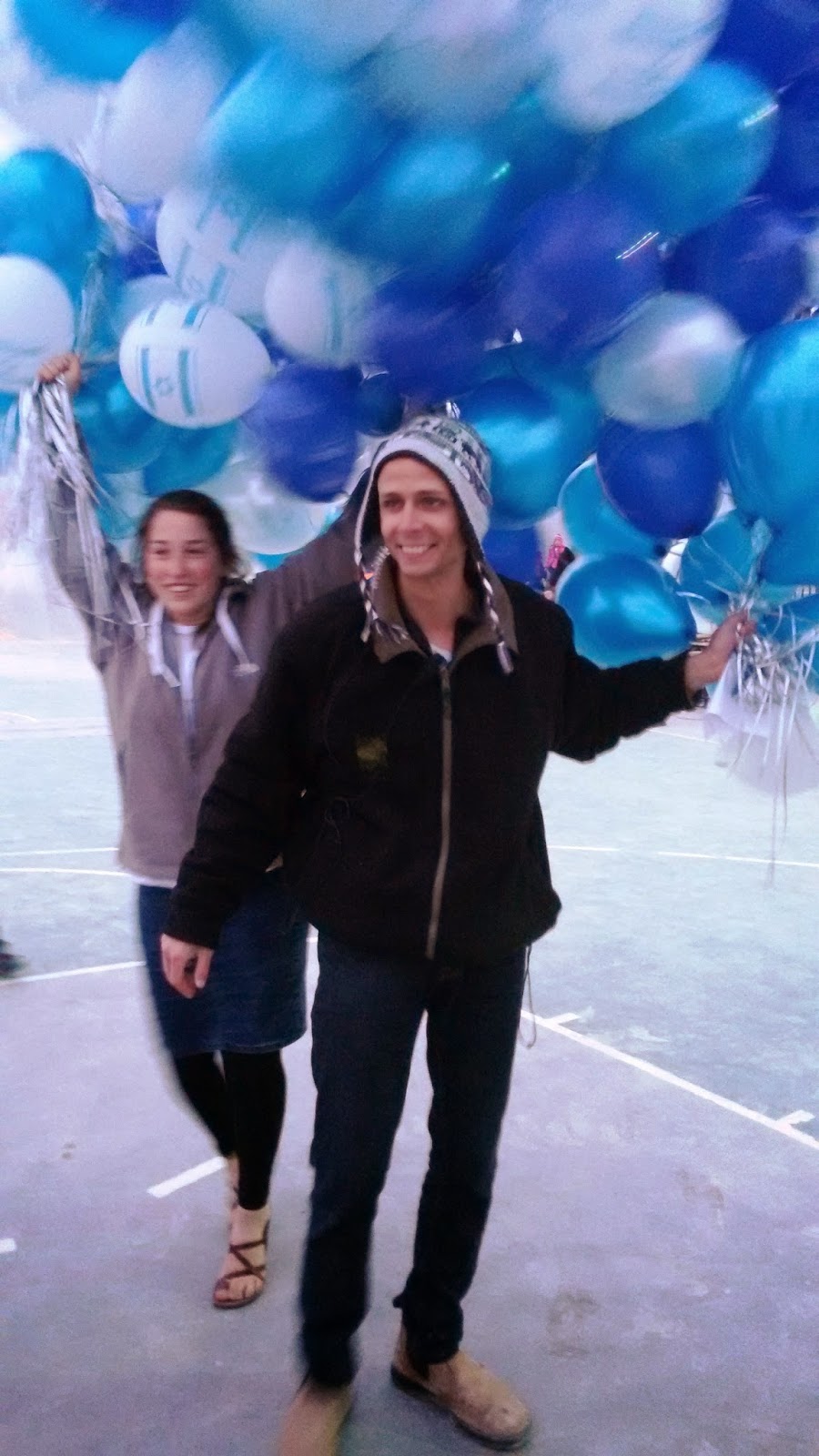 I just don't remember this kind of enthusiasm for the significance of the Fourth of July! Perhaps that is because we Americans are generations-removed from gaining our freedom as a nation. Perhaps it is because Memorial Day is a couple of months before Independence Day, so the meaning of the one is not tied so intimately to the meaning of the other.

It cannot be denied that having Yom HaZikaron blending into Yom HaAtzma'ut has a special power: these sacrificed their lives, these precious lives were stolen too young... and we have this country, fought for and fiercely defended, on the soil given to our people thousands of years ago by God. We feel the anguish of the loss of 23,320 members of our family. And immediately after that, we feel the fierce triumph and joy in holding and building this Jewish country.

What I love here in Israel in general, and in Neve Daniel in particular, is that adults and children, Bnei Akiva students and little kids, soldiers and civilians -- whether native-born or immigrant -- seem to be caught up in the drama and joy of the day. Yes, there will be barbecues and other celebratory gestures. But there is also a lot of work that goes into the patriotic ceremonies that cannot help but bring tears of pride.

Posted by rutimizrachi at 10:58 No comments: