Repaint Your Own Reality

"I never paint dreams or nightmares. I paint my own reality." ~ Frida Kahlo 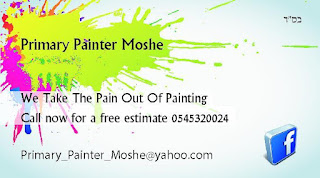 I feel like a new bride, who just moved into her new apartment!

That's what a fresh paint job will do for your spirits.

We have loved this apartment for the last eight years. It has been our friend and haven. We have wonderful landlords, interesting and delightful neighbors, a loving and accepting rabbi and community. But while the landlords, friends, neighbors, rabbi and community are still fresh and exciting, the apartment walls were showing their age. I'm not going to show you before-and-after pictures, because it had gotten a bit embarrassing. This winter's mold had gotten ahead of my yearly efforts with economica. (You have to be healthy to wash a ceiling with bleach; and we feel like we've suffered the ten plagues this year, thanks to seven truly blessed months of our grandchildren living with us: colds, strep, flu, chicken pox -- you should never see a 21-year-old who's caught his tiny nephew's chicken pox -- bronchitis, a stomach bug, pneumonia...)

We called Moshe Aaron Swartz, our friend and neighbor and owner of Primary Painter Moshe, for an estimate. He came by with his stack of paint color cards, looked over our apartment, and gave his recommendations. He knew we would want easy-to-wash paint here, mold-retardant paint there... It was obvious from the beginning that Moshe cares very much about doing a great job, and about making sure that his clients' individual needs are satisfied. When we were finished with the plan, the Dearly Beloved and I were excited about the color choices, ideas, and even the price, which seemed very reasonable.


Moshe assured us that we wouldn't need to move anything ourselves, save for computers, and that the entire operation could be completed in one day. We were a bit skeptical, because the Eastmans have collected a lot of stuff over the years. And yes, like most semi-neurotic housewives, I made sure that a lot of life's detritus was out of the way before the agreed-upon hour.

Moshe showed up with his two young Jewish assistants. (Much to our comfort, Moshe only hires Jewish workers.) These fine young men are trained in the art of wall and ceiling painting by Shmuel of Just Now Painters. I got a chance to speak with our two young painters. Yedidya Fisch will be drafting into Golani in March 2016, and has been working with Moshe since last summer. Eli Tryfus is the cousin of one of our Judean Rebels football players. He is studying in Tel Aviv in the field of computer networking. Eli had been working with Moshe's father for something less that three years, and started working with Moshe last July. Both men enjoy the work, and it showed. They were careful, polite, and very gracious about accommodating the customer when at one point I confused them about which paint went on which wall.

Moshe and his delightful bride Chani have lived in Neve Daniel since August of 2012. Their son
Eitan was born in January of this year. Moshe learned his art at his father's side. He worked for many years with his father before going out on his own, and still consults with his father on various jobs, painting techniques and paint types.

As the trio worked, Moshe explained the process. Certain paint types were employed for their mold-inhibiting properties. A couple of spaces were painted with a metal-flake undercoating, invisible to the eye, but a magical wonderland for grandchildren who can now stick magnets directly to walls. 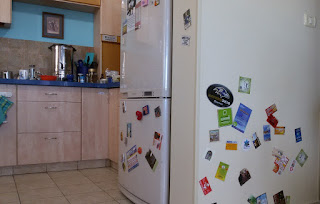 Moshe enjoyed smearing barbecue sauce on one nice, clean, dry, wall and rubbing it in, to show how easily the Meshi cleans up with a little dish soap and water, and no scrubbing, and no loss of paint.

We were very pleased and impressed that the team cleaned up after the job so well, sweeping the floor and wiping up messes, and making sure that I was satisfied with the result.


Moshe stopped by with paint and brush a day later to check on the work, and to touch up a few spots.

"So, how do I clean up any little drops of paint I find?" I asked. They'd done an excellent job of cleaning up, but my practiced mommy eye had seen a speck of blue on the hall floor.

"Just use Scotch and a little dish soap," Moshe said.

I looked at him with a wild surmise. He'd mentioned dish soap several times -- but scotch? My! These South Africans are extravagantly elegant people!

He read my expression. "Not scotch," he said.

Ah. I seem to remember a scrubbing pad with the brand name "Scotch." Apparently, these South Africans use "Scotch" like we Americans use "Kleenex." Like I said. Extravagant. 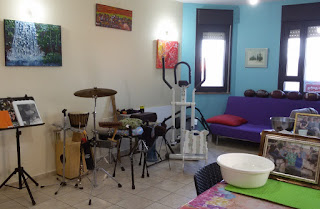 When you are tired of your walls and want brand-new, fresh and elegant surroundings, call Moshe at 0545320024 for an estimate.
Posted by rutimizrachi at 09:35 No comments: Links to this post