My son (Yeshiva Bochur, aka Exiled Warrior) stands at a soldier's grave, and shares his thoughts.  I can add nothing but my usual prayer: May our dear soldier sons all live to be really old men, with interesting but mostly joyful stories to tell their great-grandchildren. 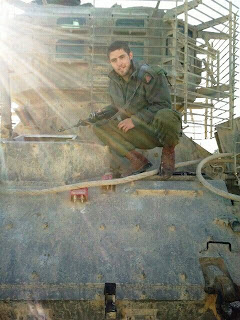 Memorial Day for the Fallen IDF Soldiers. Three years ago, I didn't even know this day existed. Today I stand on Mt. Herzl dressed in an IDF uniform with a red beret on my head. I stand before a gravesite of a soldier who died in 1977 in a tragic helicopter accident. I am soon overwhelmed by family members of all ages. His elderly sister, I believe, was telling stories about her brother, and about the day they heard the news. Her eyes are filled with tears. Wounds like that never seem to heal. All around me are graves surrounded by families. At exactly 11:00, the piercing siren goes off.

As a soldier I stand at attention, hands by my sides and my feet pressed firmly together. My eyes are set ahead, my head is raised. I feel the strength, the pride, to be a defender of my people.

The siren washes around in my head, cutting through my thoughts. I think of all my brethren, but mostly the smiling face of Major Roi Klein burns into my mind. He is my definition of a hero. He was just as much a hero in life as he was in death. A true soldier for God, these were his final words as he threw himself on the grenade to save his fellow soldiers: "Hear O Yisrael, Hashem your God, Hashem is One." To have that focus the moment before death can only be brought about by conscience preparation. A constant dedication and readiness to sacrifice for his God, his people, his Land.

It is upon this Land that I stand now. The nation freezes, no one moves. The siren wails and it is as if life itself is paused. The past, present and future seem to melt into one entity. A woman weeps. Maybe a mother mourning her son? A girlfriend? A wife? A daughter? The whole nation feels the pain, the loss. These young men and women were taken from us far too young because they decided to put everything on the line, because they know, as the words of the country song go: "Freedom don't come free."

What a strong people! I believe there must have been a time that America stood in silence honoring their fallen soldiers, but that spirit has long since withered if not all together vanished. My father being a retired Major from the US military took his sons to the wall in Washington D.C. honoring the soldiers who fell in Vietnam. He took us to Arlington, and other such monuments, but how many people my age can claim that?

But here, in Israel, everyone from young to old feels the heaviness of the moment. The grandmother standing by her husband’s grave, patting it softly, says with tear-filled eyes: "You were right Yossele. It was worth it. You see your grandson, he just drafted. He says you’re his hero. You would be so proud. I love you, my Yossele."

This is our secret. This is why we are indestructible. This is why we are eternal. I am so proud to serve you, my dear Nation. To stand with you, cry with you, laugh with you -- and tomorrow we will barbecue together, as we celebrate our freedom! And Roi Klein, Michael Levin, Yoni Netanyahu, and Yossele will rejoice with us! May their sacrifice on behalf of Am Yisrael merit us the bringing of Moshiach and the final Redemption.

This post is dedicated to all the heroes who have fallen protecting their nation, their Land. We will never forget you.

"Even the beggar stood."

Today was Holocaust Heroes and Martyrs Remembrance Day in Israel.

I had just explained to a friend yesterday that I am increasingly a "Holocaust wimp," meaning that I can't cope well with the pain of the Shoah. For this reason, I observe the losses of the Holocaust along with the gigantic sucking chest wound that is Tisha B'Av, rather than trying to deal with it again on this day.  I like to think that if it hurts this much, one can take a pass on being reminded -- because she obviously isn't forgetting.

The Dearly Beloved and I went to Yerushalayim today to meet with friends.

As we made our way down Yaffa Street, I realized that people were beginning to stand and aim their cameras at some point up the street.  Being curious about what they were looking at, and completely having pushed the significance of the day out of mind, I stopped and looked at them. Suddenly, the moment they were anticipating came: the siren began its terrible-yet-comforting wail to mark the moment of silence in memory of our brave, broken, betrayed brethren.

I stood and watched them standing, as if in some sort of frozen flash mob scene, some with cameras aloft, no one moving.  Then I closed my eyes, and spent a moment with my great-grandmother Ruth.

I thought idly of whether she was known as "Rus" in her native Poland, since they surely used the Yiddish pronunciation, rather than the modern Hebrew "Rut."

I have always felt honored to be named for her.  And as I stood with my eyes closed, I imagined her in Shemayim, in full, glorious triumph.  She won, you see.  She has great-great grandsons who walk around on Jewish soil, with Jewish-made weapons in their hands, defending the Jewish NATION. Jewish Nation, Mister Yemach Shemo, and all of your ideological forefathers and descendants.

Don't YOU ever forget.  Am Yisrael CHAI.  The Jewish Nation lives.

When the siren died down and I opened my eyes, the Dearly Beloved asked me what I had been thinking.  After I told him, we were both teary-eyed for a moment.

I asked him what he had been thinking.  "How remarkable are the Jewish people," he responded, including the slowly moving masses with a wave of his hand.  Then he pointed to a bright pink lump of color on the opposite side of the street, in front of HaMashbir.  "Even the beggar stood," he said. We wryly discussed how he managed to afford that fancy, bright-colored sheet on his "salary."  It occurred to us that some dear soul had probably purchased it from HaMashbir in a moment of intense charity for a downtrodden brother.

Yes, Neshama Of Ruth, you won.  Your children are growing up in a land of which you only dreamed.

May we do much to bring you Yiddishe nachas.

Glossary:
Shoah: the Hebrew name for the Holocaust
Tisha B'Av: the day we remember the destruction of the Holy Temple, and every other evil perpetrated on the Jewish people
Shemayim: Heaven
Yemach Shemo: "May his memory be erased."  A way to refer to Hitler and his ilk.  We try not to glorify evil by calling it by its name.
HaMashbir: probably the fanciest department store in Jerusalem
Neshama: soul
Yiddishe nachas: what every Jew wants from his children: the feeling of pride that comes from a kid who "gets it," and tries his best to be moral and kind and G-d-fearing