Making a parnassa (earning a living) in Israel can be like the wild west of the early days of America.  As a new immigrant, finding your profession might mean building a brand-new idea.  While this can be scary, it also opens up new vistas.  The Dearly Beloved was trained as an accountant in the US, worked for twenty years as an army soldier, and then did various other jobs that had nothing to do with accounting, weren't as fun as directing soldiers and tanks, but paid the tuition bills.  Now that he's in Israel, he teaches guitar and coaches American football. Needless to say, he is having the time of his life -- and he's added his own expertise to Israel.


Rabbi Chaim Silverstone worked for a small shul in Owings Mills, Maryland.  During his tenure there, his dream was to find and fill a void in the kiruv world.  He founded the Jewish Student Union in Maryland, creating Jewish culture clubs for public school students there.

His goal had always been to return to Israel, where he had attended yeshiva years before.  But he had now developed this program that was making great changes in the lives of public school Jewish kids.  So, he did what any self-respecting kiruv rav might do: he asked a "shyla."  His rabbi told him that if he could find someone who could adequately take over what he had created, he could return to Israel.  In 2008, he and his wife and children boarded a Nefesh b'Nefesh flight to fulfill the dream of living in the Holy Land.

Next problem:  How to support a family in a country where rabbis are a dime a dozen?

As a young yeshiva bochur in Israel, Reb Chaim had been quite the entrepreneur.  Initially, he ran a vegan restaurant near a seminary in the Old City, around attending to his rabbinical studies.  The restaurant was quite successful, but was requiring more and more time.  Wishing to devote more time to his learning, he started an alternative business called Yeshiva Crew Cleaners.  His team of yeshiva students cleaned 40 houses a week.  As that business was also quite successful, Reb Chaim thought about returning to it after he made aliyah.  But he discovered a very important fact: it's easier to persuade yeshiva guys to clean houses when you are one.  When you turn into the Establishment, it is a little more difficult.  (I told him this knowledge would help him to understand his children...)

"What gave you this strong inclination toward building successful businesses?" I asked him.

Reb Chaim answered humbly.  "I always wanted to make a business I could run myself."  (We at Chez Mizrachi strongly identify with this.)  He was impressed by consumer advocate Clark Howard, whose buzz phrase was "save time, save money, and avoid being ripped off."  Howard mentioned on his website a way to get eyeglasses inexpensively -- "Order online and get a pair of glasses for eight bucks!" 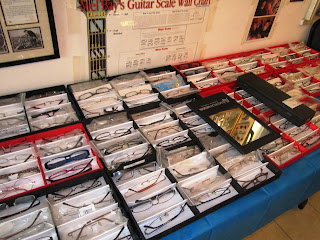 It occurred to Reb Chaim that he could order the glasses wholesale, and bring the concept to Israel.  Thus was "Esa Einai" born.  (Leave it to a rabbi to name his eyeglasses business after a beloved Psalm from King David.  "I will lift my eyes to the mountains.  From where will come my help?  My help comes from Hashem, Maker of heaven and earth.")   The business began to grow -- but as time went by, Reb Chaim became dissatisfied with the pace of the customer service of the US-based company he was dealing with; and he wanted a higher quality of frames.  So he began to network in Israel to find the quality and service he wanted for his customers.  Before long, he realized that home visits would make his service stand out from the pack, and would help chareidi families around the problem of bringing all of their children in for new glasses.  This branched out to include families in the Gush and other outlying areas: a trip into the city is less convenient than a home visit party for many working parents.  (And a home visit party is also more fun!)


During a lull in the flow of customers through my living room, Reb Chaim informed me that he also worked as a rebbi at Ohr Dovid.  "What do you teach?"

"How to be a mentsch," he answered, with a gentle smile.

If you know me at all, you know this is my favorite subject.  I asked about what his wife does.  A girl after my own heart, she proofreads, edits, and translates. She wrote Kid Power, a children's book that teaches midos tovos.  She also writes for Hamodia Kids and Binah Bunch magazines.  Clearly, mentschlichkeit is a family business.

We talked about the pictures of rabbis on my wall (a conversation that is unlikely to happen in your ordinary visit to the eyeglasses store).  We spoke about the Rabbis Twersky.  I mentioned getting a bracha for my children from Rav Michel Twersky, which precipitated a beautiful story from Reb Chaim.

"Rav Michel used to say that as a descendant of the Ba'al Shem Tov, he felt an obligation to dispense brachot.  The Ba'al Shem Tov's famous bracha was that 'Hashem should set your heart on fire.'  A friend of mine asked Rav Michel for a bracha.  'What kind of bracha would you like?' Rav Michel asked.  'I want a bracha that my heart will be set on fire -- and that I will find my bashert.' So Rav Michel replied, 'I give you the bracha that you should find your bashert, and that she should set your heart on fire.'"


The story was very moving.  At that moment, a new customer came in.  Another aspect of the heimish nature of Esa Einai was revealed: the customer didn't have a lot of money, but had a service to barter.  (It also was yet another example of the Zero Degrees of Separation between Yidden:  Reb Chaim and his delightful customer were both from Calgary... and the customer had eaten at the Silverstone table as a young person.  I never get tired of how we are all connected!)


While Reb Chaim continued to show his wares, I went to my office where Hudy had set up shop.  I was impressed with how he could make his "doctor's office" in my little home office, around all my junk.

Hudy (Yehuda), of Moroccan descent and Israeli for generations, had very warm and encouraging things to say about those of us who come from America to live in the shtachim.  I am always humbled by the Israelis who understand how much we care about being here, about our love for the land.  He also is impressed by the young people who come from Chutz l'Aretz and serve in the IDF.   Hudy wanted to be a pharmacist, but for various reasons decided optometry was a better choice...  So after studying for four years, he opened up shop.  When he and Reb Chaim found each other, a truly unique team was born, as both were willing to travel, just like the peddlers and traveling salesmen of the old west, bringing their wares and services to their customers.


As Reb Chaim and Hudy were packing up to go, I asked for a bracha for my son, who happens to be "in the marriage window."  Reb Chaim smiled.  "I give you the bracha that he will find his bashert, and she will set his heart on fire."

If you are interested in finding out more about an Esa Einai home visit, or if you would be interested in hosting a one day sale, contact Chaim at 052-713-4489 or simchadic@gmail.com.  Feel free to drop my name.  ;-)


Shul: synagogue
Kiruv: bringing Jews closer to their Judaism
Shyla: a Yiddish word meaning a question, but with the understanding that the one asking wants direction in life, usually based on Jewish law
Yeshiva bochur: young student of religious Jewish studies
Chareidi (Hareidi): what most of the world refers to as "ultra-Orthodox" Jews
Mentsch: a good, upright person with fine character traits
Midos tovos (midot tovot): good character traits
Bracha, brachot: blessing(s)
Bashert: one's intended
Heimish: homey, warm and inviting
Shtachim: communities ("settlements") over the Green Line
Chutz l'Aretz: anywhere outside the land of Israel
Embiggen: a delightful term coined by Treppenwitz meaning "to make bigger"
BS"D: an Aramaic abbreviation meaning "with the help of Heaven"
Borgesque: a delightful term coined by moi which is obvious to anyone who watches any space movies or TV shows