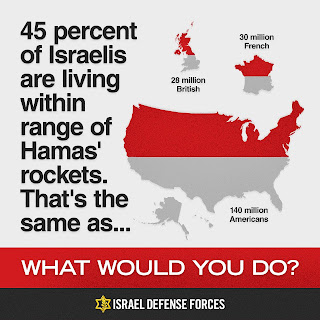 Just as every person who had ever rescued that bully from admitting defeat helped create the cowardly brute I saw that evening in the bar, every well-intentioned power that has ever stepped in and negotiated a ceasefire for an Arab aggressor has helped create the monsters we see around us today. ~ David Bogner, 2006

I haven't been writing here a lot lately.  Not because we are busy cowering in bomb shelters, thank G-d, but because I have been busy planning a wedding.  Life goes on, quite joyfully, except when I worry anxiously about my friends living in direct line of missile fire from Gaza, and about my dear sons, ready and waiting for orders to defend our country.

Okay -- I've also been busy on Facebook, somewhat less on Twitter, doing my part in the hasbara (public diplomacy vs. propaganda) war effort.  As you surely know, the modern battle ground isn't just fought with planes and boots in the mud, nor only with prayer.  These days, we fight on three fronts: the physical, the spiritual, and the technological.  The war of ideas is very active.  He who makes the most succinct and persuasive Facebook poster wins.

I know it seems very trite.  It does to me, too.  But I am reminded that in generations past, columnists in newspapers and writers of magazine articles went head-to-head on the meaning of any given war, and of who had a greater justification to fight for his version of what was right.

Today, you don't have to go to journalism school to have your say.  Quite frankly, I think it's better if you don't.  The once-honored field of journalism has been totally trashed by too many agenda-driven pundits.

Most recently, my efforts in telling Israel's side in this propaganda war have been fueled by two of my lovely nieces.  Both non-Jews, they had very different upbringings.  One was raised with the liberal values of loving one's fellow man, of getting along in peace and harmony on a global scale.  One was raised with the Christian values of love tempered with responsibility, of family and country first.  Both were raised with permission and encouragement to question.  So they've been asking "Auntie" a lot of those lately, since I am their eyes and ears on the ground in this tiny but overly-reported and disproportionately-vilified country.

Amanda has just been asking for perspective.  She lacks trust in the media, and just wants enough information to make up her own mind.  She craves different points of view.  I sent her to various sites, trusting in my respect for her innate wisdom that she will see and read what she needs to make informed decisions.  Though sometimes, I thought she would appreciate the beauty of simple, graphic images. 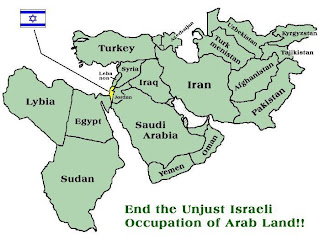 As her insightful questions and comments were made to me in private message, I won't repost them here.

Kirsten participated in a long thread of discussion over a video of a CNN interview with Israel's government spokesman, Mark Regev.


Kirsten's response to the obviously anti-Israel agenda in this video was so normal and healthy, it reminded me that the world is going insane, and that I am grateful that there are people here and there -- some of them, my relatives -- who still think sanely and clearly.

Kirsten: I really don't understand why there is such a huge bias in the media against Israel taking military action. I feel like I'm taking crazy pills. Are people truly so uninformed?

Me: Kirsten, you hit THE question. We don't understand it, either. In the face of logic, in the face of threats they surely would not countenance if their own countries were under constant terrorist attack -- they have insisted for years that Israel "show restraint."

Kirsten: Daniel and I were discussing this earlier today while waiting to pick up Emily. It's like the trashy group of "mean girls" on the playground all picking on the book nerd, her getting pissed and punching one in the mouth, then getting expelled from school. I know it's an awful metaphor, but it's just so completely ridiculous.

I responded by sharing with her the now-famous Treppenwitz post with a similar and very frightening analogy, "A difficult lesson," from 2006.  The sad truth is that Israel, pressured by world media and governments, still hasn't absorbed the lesson my young nieces seem to "get" with little effort.  It doesn't give me much hope for the current situation -- but it increases my confidence in the next generation.

May Hashem grant our leaders the wisdom and strength to finally, finally put the welfare of our citizens over the delicate sensibilities of pundits and politicians living far away from our terrifying situation.  May Hashem bless us with peace and victory over terrorism, in all its forms.  May our brave soldiers live to be very old men and women, with fascinating stories to tell their great-grandchildren.