"It must be similar to the color of the sea..."

The Dearly Beloved and I enjoy living in Israel so much that we don't really need to take vacations.  (Irony: In Chu"l, we needed vacations desperately, but couldn't afford them.)

So when we go out to "spy out the Land," it is really just to find out what else there is to love, outside our own back yard.

Yesterday, we had a wonderful adventure.  It started with our effort to get to our destination without a car.  We took a bus to Jerusalem, another bus to Tel Aviv, a train to Binyamina, another bus to Zichron Yaakov -- and then a taxi to Nachsholim on the Mediterranean Sea.  Our goal: to learn how tekhelet, the blue dye for tzitzit, is made. 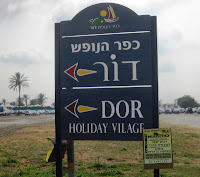 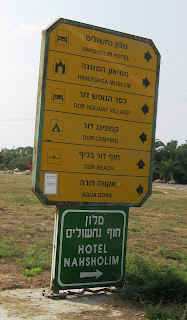 We had been instructed to meet Rabbi Mois Navon at Beit Mizgaga, the museum where we would learn about the underwater archeological history of the area, and about the science and history of tekhelet. 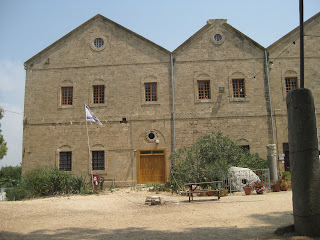 The building housing the museum had once been a glass factory, but was abandoned in 1896.  The artifacts displayed in the museum span 4,000 years of history! 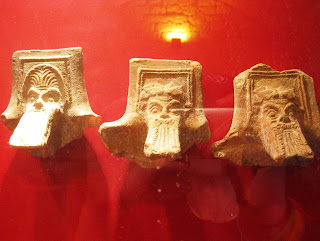 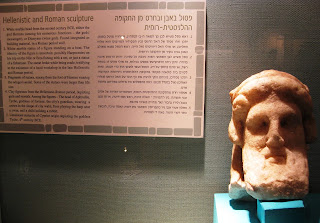 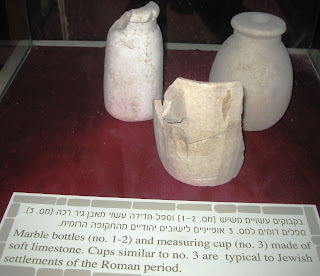 After a half-hour of milling around the museum, we were gathered into the viewing hall for a short film.  I strongly recommend the film The Mystery of Tekhelet, which can be viewed at The Ptil Tekhelet Organization (www.tekhelet.com) site.  It clears up some of the historical mystery about the tekhelet controversy, introduces the scientific concepts, and shows the hunt for the little hillazon snails.  (Tiferes Yisroel crowd:  Rabbi Avraham Twerski makes a short instructional cameo appearance.) 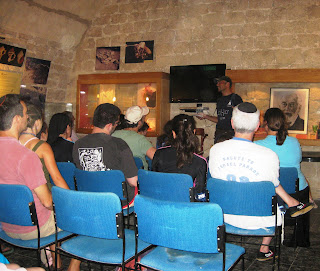 The kids were getting all the shpilkes you would expect after an hour indoors on a sunny day by the beach -- so now it was time to don our snorkels and masks, and move on to the hands-on portion of the event.  The Dearly Beloved and I were as excited as the little kids. 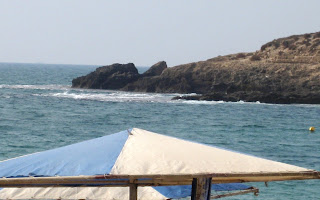 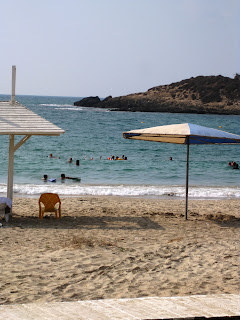 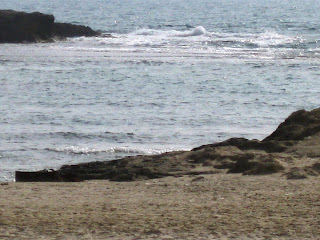 To Rabbi Navon's credit, Torah was woven throughout his lectures.  He started by reminding us that everyone needed to wear tee shirts for the sake of modesty.  This added to the family-friendly atmosphere.  Then he explained to us what the snails looked like, what might fool us (hermit crabs; similar snails; algae-covered rocks), and that we would be throwing all of our catch back after our swim.  "If the fact that it's illegal doesn't stop you from taking them, remember that it's tzar balei chayim (giving pain to animals) to take them away from their habitat.  Within half an hour or an hour, they would be dead."  Jews don't do that for no reason.


In spite of the fact that I looked cooler in my gear than did the Dearly Beloved, he still was the more successful hillazon hunter.  (Go figure.)
I had a terrific time finding hermit crabs and chasing fish -- and the Dearly Beloved found the biggest hillazon snail of anyone.  Rabbi Navon pointed out that it seemed reasonable that the biggest guy would find the biggest snail.  "They look for him, Rabbi," I explained. 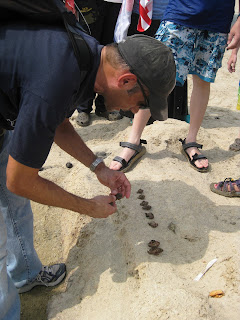 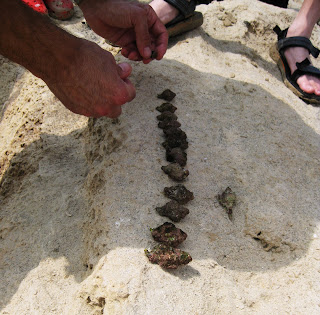 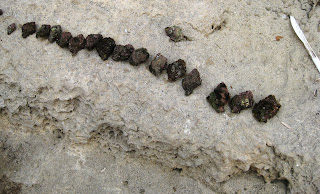 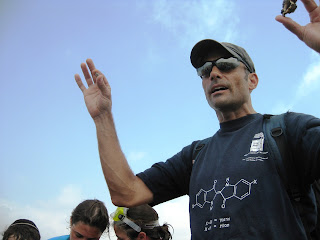 Rabbi Navon made the scientific explanations interesting to kids -- and old people -- with similar lack of patience for boring stuff that takes too long.  His tee shirt has the chemical formula for the dye that is tekhelet. 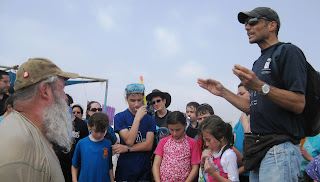 Back to the hands-on part, our personal favorite!  It was time to take a pre-packaged version of what would have come from our snails, and mix it with water, and three other "secret ingredients." 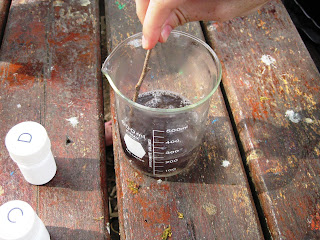 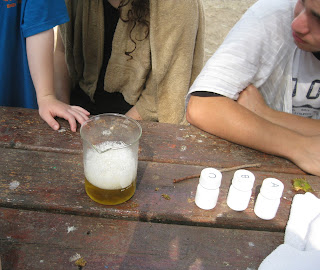 When we added the fourth ingredient, Rabbi Navon asked why we would be adding an acid, now that we'd added a base.  Young Mr. Gillis (at the Gush Etzion table, natch) had the right answer: acid added to the base neutralizes the compound, so the fabric won't be eaten.  I don't need to understand.  I sit with smart people for a reason.

After all of the "bubble, bubble, toil and trouble" part was complete, the best was yet to come. 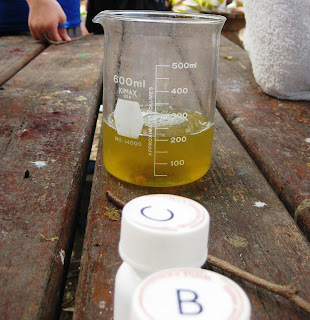 It was time to dip our wool into the mixture.  But first, Rabbi Navon reminded us that a Jew cannot live thoughtlessly.  If we just dunked the wool in the chemicals, the resulting dyed wool would be just colored wool.  Any tzitzit strings that would be made from it would be pasul (invalid).  A holy object must -- from start to finish -- have Heaven in mind. 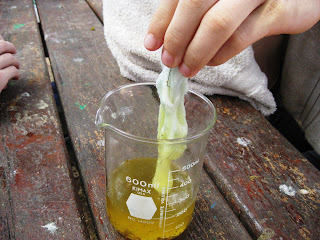 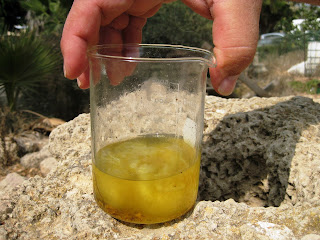 Just chemicals and wool and dunking are not the final step.  The rest is left to sun and clear water.  Incidentally, without exposure to the sun, the wool would come out with another holy mission.  It would be argamon, the Biblical purple mentioned in the construction of the mishkan.
While the sun was doing its job, Rabbi Navon gave us more details about where the hillazon snail could be found, and more scientific facts about the tekhelet dye. 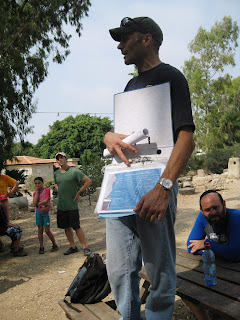 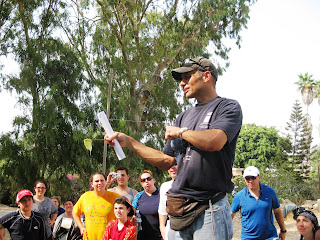 Raptly attentive, the whole crowd waited for the dénouement of our great adventure. 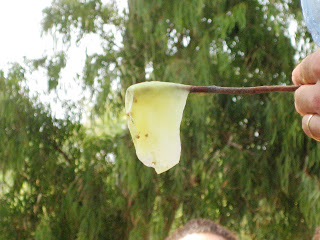 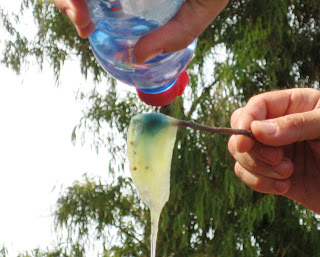 Below is a short film of the miracle taking place, right at our own little Gush Etzion table.  If you can't see it here, you can watch it at YouTube here:  http://www.youtube.com/watch?v=zsDfDR1WxFk

It was a great adventure, something fun for several generations to do at once.  And The Dearly Beloved and I have gotten a little more fuel for our fire for tekhelet.  Because it was the Romans who began the end of our use of this holy color, we feel a national pride in helping to restore it in our days. 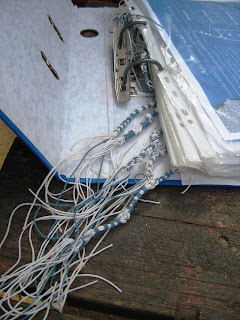 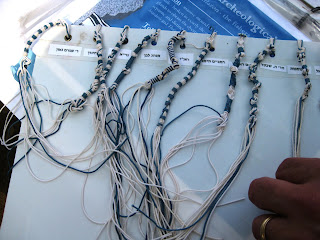 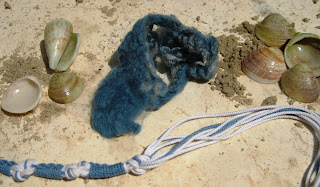 Glossary:
Chu"l: Chutz la-Aretz, outside the Land of Israel
Tekhelet: blue dye for making ritual threads
Tzitzit: strings attached to garments worn by Orthodox Jewish men - the threads remind him of  The Infinite
Ptil Tekhelet: thread of blue
Shpilkes: "ants in one's pants," antsiness
Mishkan: the movable Temple of the desert generation of the Jewish people

Haveil Havalim #280 is posted by Soccer Dad, the originator of this particular online journal of Jewish blogs.  This is a great way to get to know a sampling of the J-Blogosphere; so if you've always wondered about Jewish blogs and where to start, start here!   BTW, Soccer Dad's bride and I were old friends back in The Old Country...
Posted by rutimizrachi at 11:50

Ruti, your description of your adventure is so good, I almost feel like I don't have to go myself! But I will, G-d willing soon...

I simply cannot believe we were there just last week and didn't even know this museum exists! Ju-Boy is busy with his own tchelet and would have loved to stop in and learn about it.

He and his son are now off on one of their Miriyummy-less camping trips that I talked about in my blog, and now have plans to hit Nachsholim again on their way home. Thanks!

Wow - we've been here almost 20 years and we didn't know about this museum either. Thanks for the tip....

I know Rabbi Navon! Back in the day, he worked in a high-tech company and we were co-workers. He's a tremendous. A talmid chacham of the first water. ;)

Plus the other major Ptil Techkelet guy is our neighbor: Yoel Guberman.

All in the family.

Glad you got there. Now we know we can do it too.

We went on this wonderful tour a couple of years ago, and it's as awesome as you describe.

In fact, it was one of those rare activities which the entire family - the adults, the little kids, and (gasp!) even the teenagers - enjoyed... :-)

I LOVE this, and cannot wait to go when we can next be in Israel! You really managed to bring the experience alive, yet still make me want to go myself. My husband is sadly one of maybe three men who wear techelet where we live. Thanks for the homesickness, and a tiyul I really want to take.

what an amazing photo essay and family adventure! you wove, fun, learning, family time and judaism beautifully! your pictures are stunning! :)

Ruti, I do so enjoy the education you provide on each of your blog entries! This was excellent!

This was a great post! I intend to pass it on to lots of folks.

For clarity's sake, the Tekhelet Marine Tour is offered solely by reservation with Ptil Tekhelet, not the Beit Mizgaga museum (which only serves as a base for the tours). For information please see: http://www.tekhelet.com/DorFlyers/DorFlyer_GENERAL.pdf

Thank you so much! We had a wonderful time, fascinating Torah, history, nature and chemistry!

I tie Ptil Tekhelet for my customers several times a week. It was nice to see how the dye gets its start.

Great post. It's amazing to see how god gave us the opportunity to contact him by the nature around us.

Tallis Man: Agreed! Thank you for reading and commenting. And for improving the world: it has to help us each time someone appreciates that G-d allows us to connect with Him.