20 Tishrei 5778.
It’s that time again: our “aliyahversary” is today on the solar (Gregorian) calendar. After a decade, I can tell you that we are happier than ever, missing nothing of America except the people we love.

We came to Israel with very American teenangels; and now we have men who are husbands, fathers, part of the national brocade called the work force, and the equally important tapestry of the IDF reserves. We don't see them as much as we'd like – think "Cat's in the Cradle" – but when we do get together, we admire the lives they are building, and the women with whom they have chosen to build.

Ten years in Israel. Two shemita cycles. The first one was filled with our errors of confusion, after which I studied with a friend Rabbi Yosef Tzvi Rimon's Shemita: From the Sources to Practical Halacha, which measurably enhanced my understanding of this special every-seven-year commitment to the Land.

We arrived with a rusty set of skills... and discovered new talents that blossomed into ways to make a little money and to enjoy our new lives. I remember saying to my beloved Rebbetzin Bracha Goldberger that all we had left to do in Baltimore was to grow old and die. But in Israel, even walking to the store, even doing laundry, would be holy and meaningful.

Little did I know how much we might have to contribute to this wild, wild east. My husband is known to players and fans around the country as "Coach Eastman." I have blogged and written for various English-language sites, and with God's help, my first book will come out this month. Israeli young people and small children learn what we have to offer of music and art, English language, and snippets of grandparent philosophy. In Israel, we have become most fully ourselves.

We came with limited Hebrew... and now have somewhat less-limited Hebrew. But the boys are fluent, so we're not complaining. We try to sort out our bills or long letters from Bituach Leumi (national insurance); and when we can't, our sons or their wives help us out. Next chapter: the grandchildren will translate for us. It's already a delight to hear the two-year-old moving facilely between little-girl English and Hebrew.

There are cultural nuances that we get that were mysterious when we arrived. I'm no longer unnerved by people yelling at me when I've made a mistake, understanding that the Israeli way is to ratchet up the vocal chords from zero to 60 in ten seconds, but to drop the tone just as quickly once appeased. The how and why and when of traveling is no longer a mystery. Buses and taxis are my friends. I know when to avoid the roads entirely, based on the fact that at certain times, the entire country is traveling. I understand that when the bus doesn't come, the driver is not being capricious. He probably has a full load of soldiers; and trying to climb our mountain just to tell us he doesn't have room for us is not good for the bus. (Someone will improve the electronic bus signs someday to pass on such messages.)

I have learned the best places to eat and shop for my needs and tastes, preferring excellent service and a good story, as long as these are within my budget. (Sometimes, the trick is to make the budget work, rather than finding the cheapest option.) I can argue with a bus driver in Hebrew, and occasionally win. I can give in Hebrew compliments to waitresses and shop clerks, and gratitude to soldiers, and receive the most beautiful smiles in return. I even have philosophical conversations with Israeli friends, though these are carried on in a chulent of Hebrew and English, with a soupçon of French or a Teelöffel of German for spice.

My husband teases me that I will hunt down and photograph lizards and signs in Hebrew. True enough. There are so many varieties of lizards here, and much to learn from the signs, more and more of which I can understand. There is often humor in the simple phrasing that is worth understanding, as well as deep meaning and philosophy peculiar to Israel. The Dearly Beloved also has fun at my expense as I go around Jerusalem seven weeks after Yom Kippur and joyfully say "Melakam Sigd" to as many Ethiopians as possible. More smiles. (Truly, is there anything more delicious in this world than bringing smiles out of human faces?)

We have embraced the rhythm of Jewish holidays that make so much more sense here in the Land of their birth. And having the whole country more-or-less on the same holiday page at the same time is such a blessing, after years of being an afterthought in a tiny kosher section of Safeway and Wal-Mart. It rains most of the time when it's supposed to – even God doesn't like to be too predictable, I imagine – and there's no snow in the sukkah. Nearly everyone, nearly every car, stops for two minutes of silence to remember our fallen. Chanukah lights and Pesach decorations and children dressed as Queen Esther and Mordechai are prevalent throughout the country. There are hand-washing stations at the majority of restaurants; and even the less obviously religious don't bat an eye when seeing a fellow traveler reading prayers or Tehillim, or saying a blessing when leaving a restroom. "Homeness" surrounds and embraces.

Things that used to bewilder us now delight at best, or are quaintly annoying at worst. Why does every food package come in one-kilo bags, instead of in five-kilo bags? (No worries. It very seldom costs more in the smaller package.) Why can you get good service throughout the meal, but have to hunt down the waitress for the check? (Now that I think about it, what's bad about more time over the coffee and conversation at the end of the meal?) Why can't you walk anywhere in the country without meeting a beggar with his or her hand out? (It's a good reminder that I'm very blessed to have enough to eat.) Why do office supply stores and furniture stores also sell wine and other food products as special sales? (See what I mean? Quaint. Even adorable.) 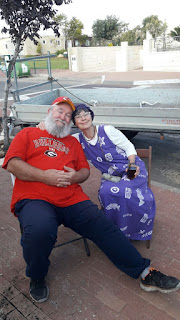 I could go on for far too long... but you have things to do. I guess I'll close these thoughts with gratitude to Hashem. We miss our friends and family back in the States, and look forward to greeting you here whenever you can come. We are blessed to have electronic means of communication unheard of a decade ago, and these will surely only get more advanced. (Think a Princess Leia hologram visit, right in the comfort of your own dwelling.) And we have been blessed with friends here in Israel who are from many different countries and who speak many different languages. Their main common feature is that they fill up the extended family spaces for which our hearts have yearned.

Looking forward to the next decade and more, here at HOME!