This was a special day for the folks in Mishpachat Mizrachi.  And it unfolded sort of the way most things do in this brave new cyber-world.

I was waiting for my Yeshiva Bochur's mefaked (commander) to call to tell me his arrival was imminent.  In Israel, commanders make a point of visiting the home and parents of their soldiers, to get to know them a little better.  (I love this army!)

The day was wearing on, and I hadn't heard from him.  I could see "Chok Murphee" (Murphy's Law) getting itself all set up to make the day interesting.  I had to be at work at 3.  I work on the computer and phone at home; so while not what I would have wanted, we could still have our visit.

I was finally at work, knowing that I had telephone meetings with students at various times throughout the day.  But I had to leave the home phone turned on.  I was waiting for the aforementioned commander's call... and I was waiting to hear from the Dearly Beloved in the States, who might call me at any moment with the name of our new grandson.

A few minutes after the brit milah would have started, but too soon for the name, the phone rang.  Commander?  Nope.  A dear friend from Baltimore, asking me where was the bris.  (Only in Cyberspace.)  She was disappointed.  "I went to the wrong shul," she said glumly.

"Don't worry!" I reassured her.  "Nothing ever starts on time!"  I gave her the correct location; and we wished each other mazel tov.

No call from the commander...  a very long session with a student...  Now I had a ten-minute gap to give a quick call to the States.  Surely by now the results would be in...

I called my son, Soldier Boy, father of the newest grandchild.
"Yonatan Shmuel," he said.  He then proceeded to give me the Reader's Digest condensed version of his speech.  "Shmuel" is for Shmuel HaNavi, who had a very close connection with Hashem, and for my daughter-in-law's grandfather, whom my son never had the privilege to meet.  He was a man who cared very much about family; and he was also a person steeped in kindness.  My children are hoping that these fine character traits will be passed to their son.  "Yonatan" is for Yoni Netanyahu, who like this baby was born in the States, of Israeli parents.  "Yoni was the hero of Entebbe," said Soldier Boy, with some emotion.  The 1976 "Operation Thunderbolt" (later referred to as "Operation Yonatan"), during which IDF special forces soldiers rescued hostages in a daring raid, gave us many heroes, but only one soldier-martyr, the commander of the operation.  Naming his son for Yonatan Netanyahu also represents to Soldier Boy his hope to very soon return to their Home in Israel.

Five minutes into our call, my cell phone went off.  Well, I reasoned, if it's the commander, I can always call him back in just a moment.  Soldier Boy told me about how well his father spoke, and that he was honored with the job of being the sandek.  The house phone rang, and I hung it up.  (Rude, I know; but one doesn't get to visit one's grandchild's brit milah three thousand miles away every day.)  We exchanged a few more hurried words -- I still had this meeting with the student in a couple of minutes, after all -- and the house phone went off again.

As we'd exchanged most of the critical information, with the "I love you's" and the "I'm proud of you both, and happy for you!" thrown in for good measure, I told my son I had to go and answer it.

With as much charity as I could muster, I answered the phone, prepared to tell the commander that he'd have to wait through my meeting with the student, if he'd care to...

"I'm Ms. Ploni, and I represent Such-And-Such organization, and we want to know if your husband can perform for us some Sunday or Thursday."

After responding incoherently to the lovely lady and gently unplugging the house phone, I prepared quickly for my meeting with the student, who also lives in America.

Still no word from the commander.

But I have a new grandson, with a very beautiful name, filled with spirituality, kindness, and hope for the future.

Welcome to the world, Yonatan Shmuel.

Glossary:
Mishpachat: family of
Brit milah, bris: ceremony of bringing a new son into the special relationship with the Creator of the world
Shul: synagogue
Mechutan: the father of one's child's spouse
Sandek: the person honored at a Jewish brit milah with the task of holding the baby.  (I hope the Dearly Beloved enjoys his sin-free status for as long as possible.  I love the percs to these honors!)
Posted by rutimizrachi at 18:19 21 comments:

"Simple pleasures are the best." 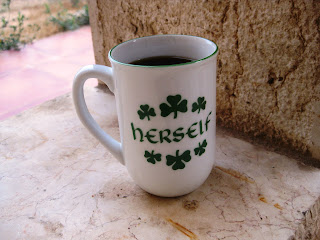 For most people I know, the last three weeks have been more hellish than usual.

By "usual," I mean that during the Three Weeks, Jews all over the world immerse deeper and deeper into the sense of loss that has existed since the Churban, the destruction of our Holy Temple.  We did not merely lose a building.  Due to our participation in its destruction, we lost something much more dear:  our close connection with the Creator of the Universe was stretched to near-breaking.  We were at this point in history as far from our Beloved Father in Heaven as He will allow us to stray, for He will never entirely allow the connection to be broken.  In spite of our "best efforts."

We are enjoined to be b'simcha -- filled with happiness and gratitude -- during most of the year.  But during this time, we are commanded to remember that Destruction and, as with every other major commemoration in the Jewish calendar, to feel it as if it were happening to us now.

That has been very easy to do with the Three Weeks this year.

The news has been beyond awful.

Every other day, a new name is added to our overstocked Tehillim lists, as we are asked to pray for more and more and more people affected by dread diseases.

The Arab world is awash in the blood of not only combatants but ordinary men, women and children.

Many brave and heroic American fighters have lost their lives, more tragically than usual, if only in the level of their heroism, and the density of the national loss.

As the chaotic stock markets tumble in Asia and Europe and the US, the UK is in flames.  An example:  a furniture store that has survived in a London neighborhood for a hundred years -- that survived two world wars -- was burned to the ground by rioters, as looters trashed the shops nearby.  Five days of this.  And even if the police get it under control, where will the fissures of the "Arab spring" erupt next?

We religious Jews have suffered humiliating tragedies at the hands of our own, even as the heartbreak that used to grab national headlines continues on unabated.  As I thought I could not bring up any more tears over the loss of the Beit HaMikdash, I read the story of a three-year-old girl forgotten in a van in Netanya...  You know how the story ends.  It ends with the driver -- a normal fellow, just like you and me -- screaming to the Heavens:  "How could I have forgotten her???"  As her parents mourn with shock their only child...

It is the morning of the Tenth of Av.  In the impossible-to-comprehend sense of Jewish time, the Temple is still burning from yesterday's destruction.  In fact, today the flames actually may be at their worst, according to our Sages.

But those same Sages had rachmanut (compassion) for the Jewish people; so we only are asked to live in the pain of the Destruction for one day, and for a bit of the next, albeit less intensely.

Practically, this means that we can begin to climb out of the abyss created by the Destruction and its consequent spiritual nadir.

We can enjoy again.  We can feel overwhelming gratitude again.

I've been "off caffeine" for a couple of weeks, in preparation for the 26-hour fast of Tisha b'Av.  (If I didn't wean myself off of coffee, I would have a headache that can only be described as "bodacious.")  So you can imagine how special is that first sip of coffee. 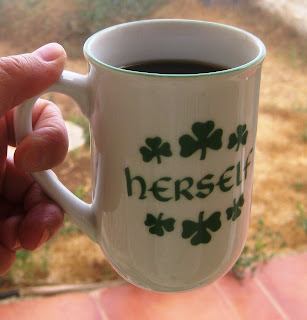 I once said to The Dearly Beloved that coffee should have its own special bracha (blessing).  He taught me something very beautiful.

As you know, we say blessings over the food we eat, to show our gratitude to Hashem.  Over beverages other than wine (which does rate its own bracha), we say "Blessed are You, L-rd our G-d, by Whose word all things came to be."

When you say that bracha, taught my Dearly Beloved, you can have in mind all of the things you might encounter throughout the day for which you can't make a blessing.

Amazing, special things that swell the heart, that we might think ought to have a bracha.

Like the first cool fog on a summer morning. 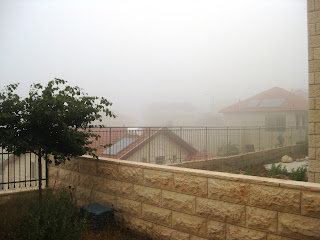 Like the smile on the face of a child. 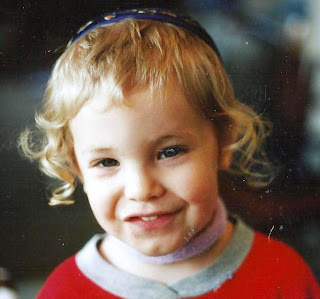 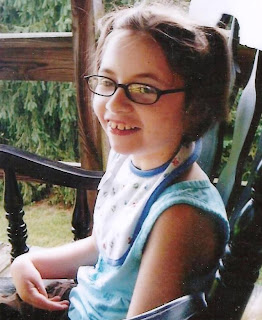 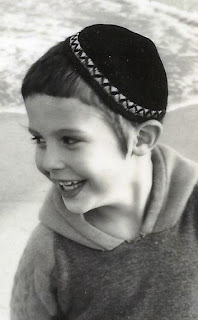 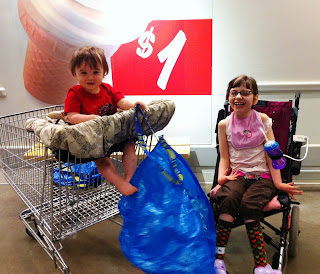 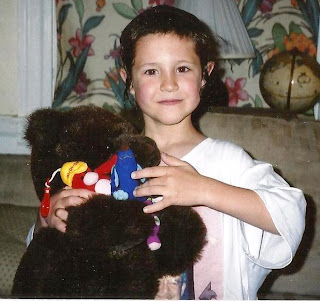 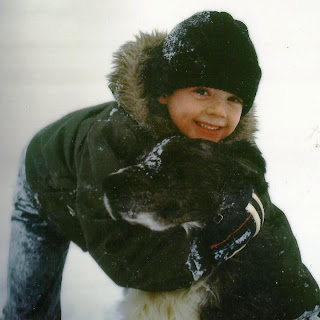 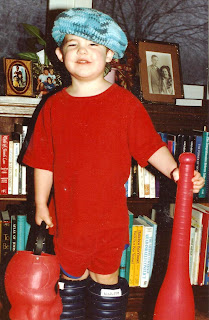 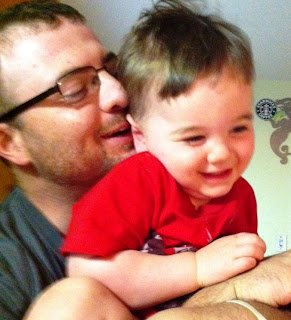 After that bracha-enhanced cup of coffee, I say the after-blessing:  "Blessed are You, L-rd our G-d, King of the Universe, who creates the many forms of life and their needs..."  One can infer from those last few words that Hashem has left a few needs for us to fill.  May we have the merit and the wisdom to take the gifts that He has given us, and use them to repair and complete the world, and to help to bring the time of the Third Beit HaMikdash, a time when there will be no more suffering, and only revealed good.
Posted by rutimizrachi at 11:55 8 comments: