Yom rishon, 3 Sivan 5773.
It was a great week for the folks at Chez Mizrachi.

It started with a small miracle, followed by food and friends, promotion and pride, and ended with a successful surprise birthday party for a lovely young family friend.

First, let's set the stage for the miracle.

I have the great privilege of having a professionally-licensed personal trainer as a daughter-in-law.  There are wonderful benefits.  Basically, Champagne Girl has me on a treadmill, and on an exercise regimen.  She is not taking "lazy" or "busy" as excuses; so every day, I am doing something toward my health, blast her.  (Uh, I mean, "baruch Hashem.")

I needed new tennis shoes, as my old pair was built sometime during the Carter presidency.

This by itself was a pretty amazing adventure.  When you haven't purchased new sport shoes in a couple of decades, new shoes feel like something designed in space: super-light, flexible and -- let's face it -- unbelievably cute. 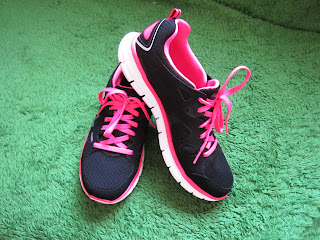 At Menashe's shoe store on Yafo, where we have purchased shoes and had leather goods repaired for the past five years, we had the next leg (you should pardon the pun) of our adventure in minor miracles.

As mentioned earlier, I don't buy shoes yearly.  I buy really, really good shoes that last for ages.  I choose my shoes less for fashion than for the requirement that they transport me many kilometers without hurting my feet.  So before leaving the house, I put on my trusty (ancient) Naturalizer Mary Janes, which have more than earned their keep over much of the land of Israel.  As I began to put my walking shoes back on after boxing up the cute little treadmill trekkers to take home, I suddenly felt a bit unstable.  Sitting back down, I removed my shoes... to find that the sole of one shoe had completely crumbled, from old age and dry rot.  (Can you say "perfect timing"?)


I told Menashe how sad I was to throw out the old friends.  After all, they'd seen me from Rosh Hanikra in the north down to Sderot near Gaza, and from the coast of the Mediterranean to the border with Syria.  The uppers were still in excellent shape; and to get shoes of this quality, I'd have to fork over in excess of 600 shekels -- not in my budget these days.

Menashe, always ready with his expert leather stitchery, offered a solution.  Come back in a week, he said, and for 150 shek, he'd rebuild my shoes.  And he did!  They look and feel like they could go at least another decade.

Sandwiched in between the broken shoes and their repair was an enjoyable and educational Rosh Chodesh evening here in Neve Daniel.  Women from our community got together and showed off their favorite chalavi (aka milchig, aka dairy) delicacies.  Of course, I forced myself to try everyone's culinary offerings, not wanting to offend the neighbors.  (What lengths I will go to for peace!)  Little did I know that I am surrounded by world-class cooking talent, right here in my small town!  Fortunately, there will be a cookbook forthcoming -- as soon as all of you turn in your recipes to Haya.  (No pressure.  Well, a little pressure...  I really want to prepare these delights for my family!)

I have been making sushi for years.  But the tricks I learned during Corinne's sushi class helped me get over one hurdle: the rice-on-the-outside roll.  Yesh!  And I had a great time with friends. 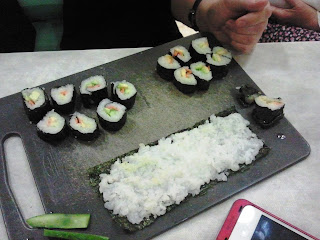 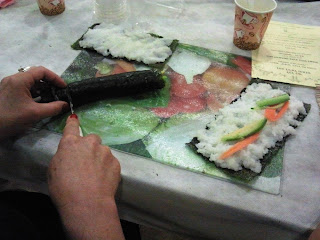 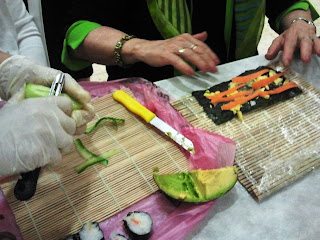 There were mitpachot (head scarves) and handmade jewelry for sale, as well as gifts of kedusha available.  Each of us was given our own personal pasuk of Tehillim, with an explanation of what it might mean for us personally, by another lovely and learned neighbor. 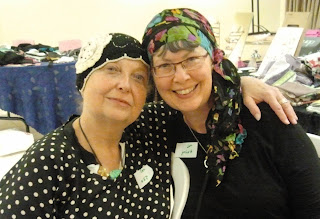 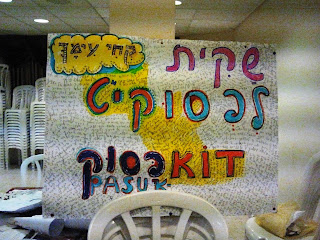 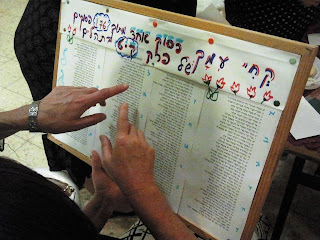 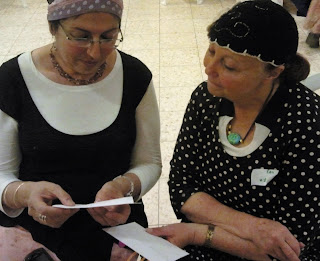 Another son, Sports Guy, was officially inducted into the IDF, at his tekes hashba'ah (swearing-in ceremony), at which he received the Jewish state's weapons of war: an M16 and a Tanach.  (There is something very perspective-enhancing about receiving a Jewish Bible from one's military commander.) 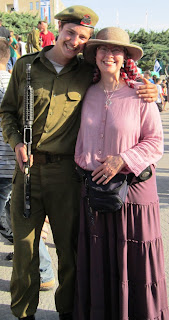 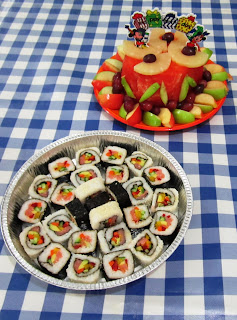 The week ended with yet another of the stunningly complex surprise parties that my personal young people have been throwing for other young people.  (Yeshiva Bochur:  "I've put a ban on all surprise parties among the brothers for the next year.  Seriously.  These are wearing us out.")  Somehow, the young person being surprised always "falls for it," much to everyone's joy.  Once in a while, we old people get to play a part.  I got to show off my inside-out sushi for our young friend, who prefers fish and rice to anything al ha aish (Israeli-speak for barbecued), and the Dearly Beloved and I put together a watermelon "cake" for her, since she doesn't eat cinnamon rolls. 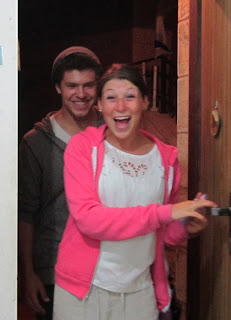 That surprised smile from our young friend Molly McMolly and the "job well done" smile from Stunt Man were more than worth the effort.

Next up:  The Kraft Family IFL (Israel [American] Football League) Awards Banquet, followed by Shavuot, meaning cheesecake and all-night-learning (for the guys.  To paraphrase Dirty Harry: "A woman's gotta know her limitations."  And this woman holds by early to bed, early to rise).  Then the Strung-Out Quartet performs at the Judean Rebels' year-end barbecue.  Should be a fun and joyful week, bs"d!

May we share many more joyful stories than sad ones.  Chodesh tov, and shavua tov!
Posted by rutimizrachi at 10:55 10 comments: