This post hopefully will serve three purposes: it will illustrate one of the subtleties of transitioning to a new country; it will allow me to express hakarat hatov (gratitude) to an anonymous soldier for a kindness; it will give readers the opportunity to share (please!) stories of kindnesses done to them, by soldiers, or by any Israelis.  Thank you for playing along!

One of the facts of immigrating to a new country, language and culture is that you take a while to understand the nuances.  An example is the frustrating juxtaposition of IDF soldiers and civilian buses.  A couple of years ago, I wrote about this from a humorous standpoint in a post with the (if I do say so myself) intriguing title IDF storms bus; civilians victorious. 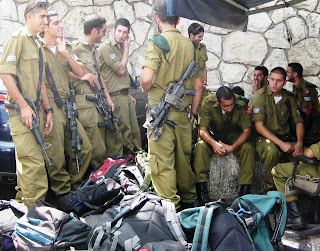 As time goes by, you can learn the reasons behind certain behaviors, if you are willing to begin from the premise that people are not rude, just differently-cultured.  When I was in the US army, we had troop transport buses that were never used by non-affiliated civilians.  While a service member could certainly use public transportation, civilian buses were not used, at least during peace time, for mass transportation of military personnel.  But Israel spends its military budget differently; and I am certainly not in a position to determine if the money is spent wisely.

Not having their own transportation system puts IDF soldiers into a difficult position.  Most soldiers try to stay at home until the last possible bus -- because they want as much time as possible with family, their own beds, and normal food.  Some of them are just exhausted.


As my newly-married soldier son, Yeshiva Bochur, explained to me:  "Ema, most of the guys I serve with were raised with good midot.  But we are told by our commanders that if we don't make it to the base on time, we will be punished by losing Shabbat.  They don't care if there is traffic, if we miss the bus, if the bus breaks down.  Somehow, that's all the soldier's fault.  And we really want to see our wives or girl friends and families.  We will get on that bus, no matter what." 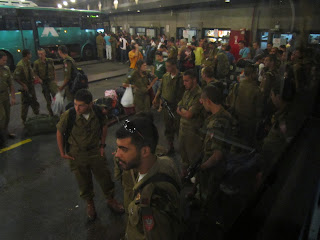 I know that he's right.  I've heard the negotiations on the phone with the mem-mem (acronym for "platoon commander").  To be fair, there are married commanders who understand, or those who are simply sensitive and fair.  But there are also a few commanders who like to throw their weight around and enjoy the power of punishment.  Stunt Man tells a story about a bus that was supposed to get the soldier to his base an hour ahead of schedule. The bus got stuck in traffic in a tunnel, behind a bus that had caught on fire.  The soldier had a copy of the bus schedule, as well as cell phone photos of the bus on fire... but his mem-mem blamed him for the three-hour delay.  "Not fair" doesn't begin to cover it -- but most soldiers just want to get through their service without making additional waves, so they don't do much more about such commanders than grumble.

And crowd the next bus to get in ahead of anyone who might cause them delay.

Once everyone gets on the bus, a soldier will very often give up his seat for an older person or couple, or for a pregnant woman or a mother with children.  (In fact, Sports Guy had a commander who told his soldiers: "If I ever get on a bus and see one of you sitting while a citizen is standing, you will be punished." Sports Guy had great respect for that commander.)

This background is all leading up to a thank you to an anonymous soldier. 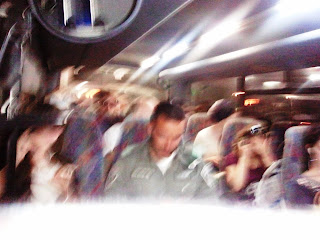 I know you were tired.  It showed.  By the ring on your finger, I could see that you had probably just said goodbye to your wife, and perhaps kissed your still-sleeping children's heads.  Making sure that you got on the bus was very important to you, as I have learned from my own soldiers.

Nonetheless, as it looked like seating might be limited, you surrounded the doorway (in a stretching and swelling maneuver of the body at which Israelis and even olim vatikim begin to excel), keeping anyone from entering until I and two other older ladies were aboard.

I am grateful you got a seat, and I hope that you will never, ever be subjected to a foolish punishment that keeps you from your dear family.

If I would meet your ema, I would be happy to tell her what a good job she did raising her son.

I look forward to learning more about the reasons behind the behaviors that now infuriate, confuse or amuse me.  I must remember that being dan l'chaf zechut is an important part of being a Jew, and a great way to develop love for one's new country and its people.

Glossary:
Midot - character traits
Chayal - soldier
Olim vatikim - immigrants who have been in Israel for a few years
Ema - mama
Dan l'chaf zechut - the Torah requirement to give the benefit of the doubt, to assume the best in people rather than the worst

Posted by rutimizrachi at 16:17 No comments: