Neve Daniel to the Rescue!

"An army marches on its stomach." ~ Napoleon Bonaparte

I have had many opportunities to be amazed by my Neve Daniel neighbors -- so it should really be "old news" by now. But I remain in awe of these people.

We received word that 80-100 young soldiers had spent Shabbat without food Apparently, these soldiers were sent just before Shabbat to replace 40 who had been moved closer to the north. And when the 40 left, the kitchen was entirely dismantled -- and there was no replacement kitchen, nor fuel for preparing food, and also no MREs. ("Meals Ready to Eat" -- manot krav in Hebrew -- is the modern version of the Spam and candy bar "C-ration" culinary delights that soldiers were issued to keep them alive when they were away from the mess hall.) MREs, we were told, are too expensive to use when it's not quite war-time.

My contact got details from the mem-pay (company commander) in charge. The new arrivals did have food Thursday morning, before leaving their regular base. For lunch en route, they received still-frozen schnitzels, due to the fact that they were "jumped" (reassigned) unexpectedly; and there were not enough for everyone. Dinner simply "didn't happen."

To compensate while the army sorted out the logistical difficulties of getting dietary infrastructure set up after the fact for dozens of soldiers, an army vehicle picked up food from the machsom base about ten to fifteen minutes up the road (that was still being manned by boarder guards and police) and delivered food to the mini-base, but not enough for everyone.  They shared.... and some were still hungry. As one of the boys said, "If you were in the back of the line and the bread ran out, you just didn't get."

So a lot of strapping 18- to 23-year-olds sat around through Shabbat, without sufficient calories. Please don't ask me how this happened, how the army could let this happen, why the army didn't find a way to fix it on its own. This is the definition of the famous army term, SNAFU: Situation Normal, All Fouled Up. And even though there will be people who will assume the SNAFU is an "only in Israel" experience, I can tell you from my US army experience, its not. I can tell you many stories of logistics in the US army that simply went awry, due to situations such as this, where a unit arrived ahead of the planning. Certainly it can happen under the stress of impending war.

What is an only-in-Israel experience is what happened in less than an hour in Neve Daniel. Word was put out on the local chat list.

Eighty soldiers have been without food through the entire Shabbat. A driver is coming to Chez Mizrachi to pick up whatever food we can gather. Please help!

It appeared after that post went out that we should have said "without adequate food," in fairness to the army... but that's the problem with the game of "telephone." But this story isn't about how the IDF is made of humans who make normal, human mistakes. It's about my home town.

Neighbors called, came with Shabbat leftovers, sent children with bags and boxes of everything they had available. The atmosphere was festive, very energized, as only a last-minute group mitzvah can be.


It was loaded up in the car, and driven off to its destination by another member of the yishuv.


The best part of the story is that I live in a wonderful town, filled with loving, caring, helpful people, who will drop everything and rush to aid a fellow Jew at a moment's notice.

As our delivery person said: "It was not [as it turned out] an emergency. Our children had not been put in a situation with NO food for two days. Assessing how hungry and why hungry... I have to leave that to emptier stomachs than mine. What I can tell you is that these guys, half of whom who will not be home for Rosh Hashana, are enormously grateful for the food, the concern and the love shown them this evening by the good folks of this yishuv. I only wish you could have seen the guys pouring out of the caravanim as they heard that food had arrived. So grateful!" 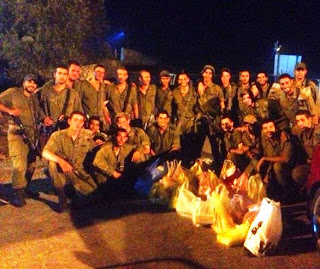 Posted by rutimizrachi at 16:12 No comments: