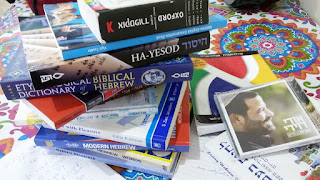 When I arranged to attend the concert, I really didn't expect to understand anything. I was just looking forward to a night of good music by a really cute and talented duo.

Because there are a lot of Anglos in the community that hosted the event, the musicians asked if they should speak between songs in Hebrew or in English. An overwhelming segment of the audience requested English. Though I didn't vote, I was relieved. There was hope I would understand something, which would add to my appreciation of the performance. Perhaps they would say a little about each song, thereby giving me a "hook" upon which to hang my efforts at translation...

But halfway through her first statement, the delightful young artist was shouted down by the all-too-familiar refrain: "Rak b'Ivrit! Anachnu biYisrael!" (Only in Hebrew. We're in Israel.) The small but intimidating band of possibly Israelis from birth but more likely olim vatikim persuaded the young lady to switch back to Hebrew. I tried vainly through the evening to understand more than a word here and a word there -- but as usual, I didn't get the jokes, and didn't understand much of anything else, within the mostly Hebrew songs and their accompanying explanations.

I worked hard to get past this, to no avail. Of course, the shouter was correct. We live in Israel, we should speak Hebrew. God knows, I'm trying, with many ulpanim under my belt, and with four hours a week with study partners, as well as independent study throughout the week. I'm getting better, l'at, l'at, but enough fluency to understand people speaking faster than the Pimsleur lady is still an oasis shimmering far off on the desert sand. At nearly 60, I have to admit that the fact that my sons are all fluent and many of my grandchildren will be fully bilingual may be the most pride I will attain in this wonderful but oh-so-foreign tongue.

I listened to the songs, tried to interpret lyrics and sweetly-worded commentary, and finally tried to relax my jaw while I mentally penned a "love note" to the shouter.

While you are of course correct, I am guessing that living in this town, you either have passable English, or are more likely a person who came from an English-speaking country when you were 30 or younger, and managed to immerse yourself in this beautiful language, and got it. Kol hakavod to you! I am duly impressed.

But would it have harmed you in any way to let those of us in the audience -- who struggle daily to understand our phone bills, arnona notices, bituach leumi reminders, even our grocery bills -- to have even a partial comprehension of what you probably could have understood in both languages? And even if you are Israeli, and struggle with English, couldn't we have split the difference -- you understanding the song lyrics, and me understanding the commentary in between?

Thanks for reminding me that I'm too stupid to accomplish what you so proudly did.

I have to say that I was so depressed by the ordeal, I thought briefly of calling my various chavrutot and saying "Let's give up. It's not working."

Briefly. Because even though it is still a struggle, even though I don't know if I'll ever "get" this language entirely -- I am getting better all the time. I can make myself understood, even though we have to often potchky together the conversation with bits of Hebrew and English and body language. If someone has something important to impart, I know how to ask them to slow down, to speak to me as if I were a child (meaning that they should leave out all the extra words, and cut to the chase). It delights me that as we try to communicate in Hebrew, many Israelis discover that their high-school English isn't as bad as they thought it was. We work it out, in two languages.

My mood was rescued near the end of the performance when one of the singers was thanking us. She ended by thanking in English those of us "who didn't understand anything we said tonight." I appreciated her acknowledgment. And then she did an even sweeter thing, by finishing with a song that said it all: a lovely and heartfelt rendition of a song by Jason Mraz with the line "We've got a lot to learn, but God knows we're worth it." I felt validated, and embraced. As if she were saying, "It's okay, Aunties and Uncles. I know you're trying. Don't give up. I hear you."

I bless all of us that we will have the brain cells and pertinacity to keep trying, and to have people around us who remind us that we are improving, slowly, slowly. I bless us further that we will always retain the humanity to remember with kindness and patience those who are struggling to climb whatever pinnacle we ourselves have managed to surmount.

Glossary:
Olah Chadasha: new (female) immigrant (male would be oleh chadash)
Anglos: English speakers
Olim vatikim: veteran immigrants; immigrants who've been here for a fairly long time
Ulpanim: Hebrew language classes, the best of which are Hebrew study in almost exclusively Hebrew
L'at, l'at: slowly, slowly -- what every comforting Israeli says about every immigrant's efforts at the language
Pimsleur: a very patient style of study that builds comprehension syllable by syllable
Arnona and Bituach Le'umi: Don't ask until you live here. Once you do, you'll understand. Taxes and insurance.
Chavrutot: One-on-one study sessions (chavrusas in America)
Potchky: probably Yiddish for sticking together haphazardly, hodgepodge
Mraz: I haven't a clue where that name comes from, or if it's an actual word -- but he writes pretty songs