A time to mourn, and a time to dance 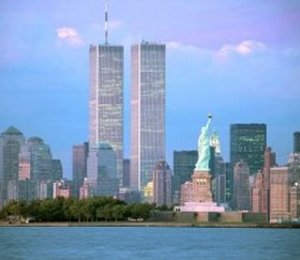 I had finally accepted the inevitable.  We had made the decision to refinance our home mortgage.  I don't want to overstate it: but for me, that decision had behind it the ever-so-distant clang of the cell door closing.  It meant we weren't going anywhere, that we were staying in our lives in America.  But I was accepting it.  The clang was there, but it was far away.  I could do this.

After all, we lived in one of the finest Jewish communities in America.  We had wonderful neighbors, a loving congregation, friendships we had built over sixteen years.  We had jobs; we knew the language.  We knew what to expect day to day.  We were planning our life and aging and death in the land of our birth.

The lady at the mortgage office was very sweet.  She had explained everything to me, to us, very clearly.  I hung up the phone to discuss the details with the Dearly Beloved.

We had only shared a few tentative words on the subject when the phone rang again.  I assumed it was the mortgage company lady with some new detail.

It was the voice of my dear Rebbetzin Bracha, who was also my neighbor.  "A plane has just crashed into the World Trade Center," she said, softly and terrifyingly.

I know she said a few other words, though the shock of that few moments keeps me from remembering what they were.  I think I responded with my usual genius "Okay." (This is my favored insightful response in times of crisis.  I had used exactly this remark when my husband had gotten off the phone with the US Army captain who had informed him that American troops were entering Iraq.  The Gulf War had begun...  and that announcement unleashed all the coiled fear of anticipated poison gas attacks against Israel.) 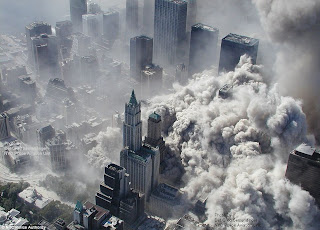 I turned on the radio at the same time the announcer was incredulously sharing news that the second plane had just hit the World Trade Center.  It felt like War of the Worlds -- except that this was no hoax.  The next two weeks were out of a novel or a movie or a dream.  The tectonic plates of our American lives shifted.

They never again returned to the same place.

We never called the mortgage company lady back.  (When things resembled sanity again, we joked that the reason was that hugely bad things seem to happen when we talk with mortgage companies...)  We hadn't expressed it at the time, but one of the excuses for staying in America had been the taken-for-granted safety of our sons.  In Israel, it was a given that they would put on uniforms, that they might have to fight for their and our survival.  But in America...  Well, there were no guarantees anymore, were there?

At about 4:30 PM yesterday, the Dearly Beloved and I left our apartment in Neve Daniel to catch a bus to Jerusalem.  It occurred to me as we walked that it was 9:30 AM in Baltimore on September 11, 2011.  I started to think of what had been happening that morning, ten years ago... and how much our lives had changed as a result.

We were on our way to a wedding.  We were privileged to attend the wedding of the daughter of Laura Ben-David, a woman who had been very instrumental in our aliyah to Israel nearly four years earlier.

Sports Guy was on his way to Jerusalem as well.  His destination was Kraft Stadium, where he and his fellow Israel National Flag Football team members would gather before going to watch on someone's over-sized TV screen his beloved Baltimore Ravens against their arch-rival, the Pittsburgh Steelers.

Yeshiva Bochur and Stunt Man were in training with the IDF, becoming the guys who help to keep Israel safe.

Soldier Boy, now retired from the IDF, was in Baltimore with his wife and children, planning to introduce his wife to a concert of our favorite family band, Gaelic Storm.

Later, as we moved among our Neve Daniel neighbors in the wedding hall, we felt that old familiar feeling of being with a huge group of family members.  Only now we were celebrating the building of a brand-new bayit ne'eman in Israel, with our Israeli branch of the family, instead of with our dear Baltimore mishpacha.

In other words, the terrorists lost.  We as Jews, as Americans, and as Israelis, have much life still in us, and much to celebrate. 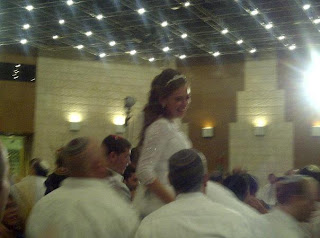 Mazal tov, Shyra and Gidon!  Mazal tov to all good and decent life-loving people.  May there be no more weeping, no more mourning, and much dancing.

Glossary:
Aliyah: Jewish immigration to Israel
Bayit Ne'eman:  lit. faithful home, this refers to the building of a new marriage, a new microcosm of the greater Jewish family and inherent mission
Mishpacha: family
Posted by rutimizrachi at 11:04 7 comments: