Hey, Bal'mer! Just catching up with the folks back home.

Even with all the cold, wind and rain (baruch Hashem for the gift of more water in the holy Kinneret!), there are some things about Spring in Israel that cannot be missed. 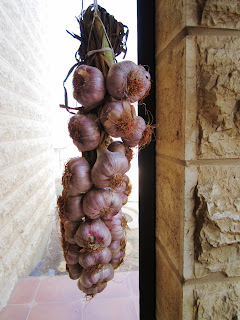 Because we were sick, we almost missed the annual trek to the Mahane Yehuda shuk for fresh garlic.  When we finally arrived, all of the special deals had passed; so we ended up paying top shekel for three beautiful bunches of this rosy Israeli Garlic.  (Experience has taught me that it's better to pay for the good stuff, if you want it to last and keep its quality through the whole year.)  We've been trying new ways and places for drying it.  This year, the landlord put a window in the opening on our patio.  It will help to keep the wind from putting out the lights of the chanukiot at Chanukah, with Shabbat candle lighting at Sukkot... and it appears that the garlic may have found a home as well.  (Yes, I know -- I'll have to figure out the logistics when I start lighting fires on the shelf below...  We'll cross that bridge when we come to it.)

The kale is still growing for a little while longer... so I can make wonderful breakfast shakshuka to start the day. 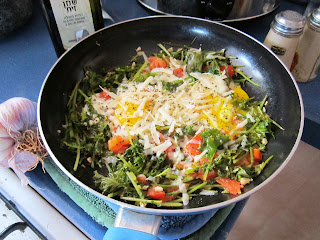 Simple ingredients -- fresh garlic and onions, home-stewed tomatoes and grated Parmesan make a nice addition to the kale and a couple of eggs.  With a side of piping hot coffee from Sipsters, of course.  (Watch for a future interview.  These guys are worth knowing, and knowing about.  And the coffee is GREAT!)

The sunsets have been amazing.  I wish I had the kind of camera (and skill) to truly share them with you -- but here is a picture offering a small hint of the beauty.

The grown kids have been around a lot.  It's nice.  It's like I'm sitting in a very comfy theater chair, next to the Dearly Beloved, and we're watching this entertaining movie of these fully-capable young people functioning in our kitchen.  And we helped produce the picture.  (At least some of the main characters...)

Occasionally, the weather has been nice enough to allow forays into the Holy City -- where everything from the sublime to the silly can be found.  We run into holy friends, enjoying a family day together.

And the sweet smiles on these young ladies' faces sort of make you forget that they are enjoying one of the tourist pastimes of Jerusalem: having their feet -- ehhhhhh -- catered to by bacteria-eating fish.  Yes, indeed.  You can find 'most anything in Israel. 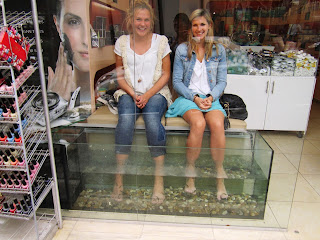 We had lovely celebrations with friends at Yom Ha'atzma'ut, that I was enjoying far too much to photograph.  My son wrote a short piece about the juxtaposition and power of the three days of Yom HaShoa, Yom Hazikaron, and Yom Ha'atzma'ut:  The Price of the Independence BBQ.

One son went into the IDF; another has completed his service.  Another is adjusting quite nicely to married life, around his continuing service.  It will be a pleasure to continue watching as the winds of Spring finally blow in temperate weather, and whatever change is in store for us in the coming months.  Looking forward to seeing more friends and family coming to visit -- and coming Home!

The Pain and Power of Yom HaShoah

This is a four-year-old post.  Sports Guy is now a soldier, as are all of his brothers.  I can't say it better now.  Please share your thoughts.

Tonight is Yom Hashoah.  Sports Guy (all of 14-years-old) attended a Bnei Akiva event to educate Israeli youth about the Holocaust.  I only hope he didn't see the video. Of all my children, he is the least able to cope with the Shoah.  I remember standing in the public library with him as he tried to do research for an assignment for his third grade class.  He was supposed to write something regarding the period between 1930 and 1945.  It was clear that the teacher was gearing up these Jewish kids to do a paper on the Holocaust.  We pulled out a book designed for children.  (It was important to me as a mother to keep my kids from seeing stuff that was more graphic than their ages should be able to bear.)  We were looking at this kids' book, which dealt with the subject in a very sensitive manner.  And then my Dani looked up at me with eyes frighteningly shining with tears.  "I can't do this, Ema."

After a long quiet hug, we found something else about the Thirties to write about.  I don't remember what it was -- something about a US president, probably.  But we established a clear understanding between us at the time:  Dani doesn't do Holocaust.  Intuitively, I understand that he "carries" it differently than my other sons do.  Is he "an old soul"?  Does he have dreams like his mother's?  I don't know.  But I respect that he handles this differently than his brothers do.  His brothers all want to crush and destroy anyone who would threaten the Jewish people ever again.  Dani agrees.  But something in Dani remembers or just knows how much it hurt to be a Jew then.  He feels it in a way they cannot.

"You know what it was all about?"

After Sports Guy trundles off to bed, I think of a cherished memory.

Soldier Boy was younger, and was -- uh, let's just say he was "giving me fits."

But deep down inside him was a kid who wanted Mama and Papa to be proud.  He has a beautiful voice, does Soldier Boy.  He learned all of the words to "Mama Rochel," a famous Yaakov Shwekey song, written by Abie Rotenberg.

We don't speak Yiddish in my house.  Not our cultural upbringing.  But he memorized all of the words, even the Yiddish words.

And while he was singing the Yiddish words at the end, I thought suddenly of my father's grandmother, Ruth, for whom I am named.  As far as I know, she was the last religious person in my father's family.  As the story goes, the family was pretty wealthy.  They had gathered at the family farm just outside of Warsaw...  and then the Nazis came.  One of them said to my father's lookalike cousin, "Here boy -- catch!"  And this animal threw to my father's cousin a hand grenade.  My grandmother saw "her son" blown up -- and even though they presented him later (he'd been hiding under a haystack) -- Rita was never the same.

There was a mentally-retarded girl in the family.  The Nazis decided to take her into the woods...  Of course she was afraid.  My paternal great-grandmother, Ruth, said, "I'll go with the child."  They were taken into the woods, and that is the last anyone in the family knew of them.

So when I heard my son, in his unbelievably sweet tones, singing this Yiddish lyric...  I thought I could hear Ruth, Hy"d, saying:  "I won, Adolf.  I am still here, through this boy.  YOU are gone.  But I am still here."


To carry on. To keep singing and telling over...  To let them know that we will never let them down again.  To fight to protect our people, in our land.   And everything that means -- even to protect the holy aspects some of our grandparents did not know.