What Then Must We Do? 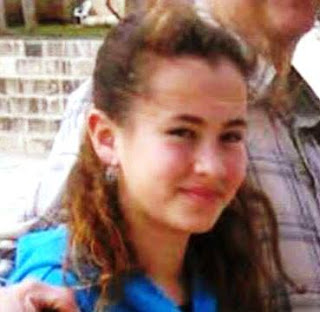 For those somehow not in the know, a little 13-year-old Jewish girl named Hallel Ariel who just graduated 8th grade was murdered in her bed, stabbed repeatedly by a 17-year-old Muslim boy who somehow infiltrated her Kiryat Arba home, near the holy Jewish city of Hebron. Fueled no doubt by the need to fix some broken thing in his relationship with his parents -- I have heard that a lot of these kids take their lives this way because they are losers with no other way to make themselves important -- this evil child was subsequently praised and glorified by his people and his people's leadership. Voices of protest in the Muslim community globally are hard to find. And as usual, the murderer's dear mommy sees him as a hero of the resistance, and hopes that more children of her people will die stabbing little Jewish girls to death simply for being Jewish and living in the neighborhood without her approval.

"What then must we do?" Is there a rational, effective protest we can make as a body, one person with one heart? We cannot go around murdering people, killing mothers and grandparents and children, non-combatants. We cannot deify our children for murdering other people's children in their beds. We cannot become like our enemies. Whether you believe in living by God's laws or are simply a moral person, you cannot accept this.

Yes, people say all kinds of things in bouts of impotent rage -- but surely they must know that they cease to be moral beings if they act upon such rage. Apart from the crazy among us, I am sure that this is true of nearly all Jews, of nearly all Jewish Israelis. While we want murderers and even potential murderers to be punished, we do not believe in randomly going after the enemy's civilians.

When horrible Jewish children murdered an Arab boy, we protested loudly, and called for their punishment; and they were punished, not honored. No streets were named for them, to the best of my knowledge, no soccer fields. I happily cannot remember their names, nor would I wish to. Yet the world at large turns a blind eye to Muslim murderers of children being honored posthumously by their people.

Besides continuing to live proudly in our land, without apology, how do we fight this terrible war? I am not speaking of the government. I have little to no power over the government. I vote, always, for candidates who put the safety of Israeli citizens first. They do not become Prime Minister. They are considered "too radical," because they are not interested in capitulation for the sake of currying favor with the West. While they do not espouse murdering civilians in their beds, they do believe in standing our ground and protecting Israeli civilians. This seems to be too radical for those who would sell our souls and our lives for empty promises of peace...

What's the plan for a protest, people? Do we build tent cities like young people did over the price of housing and cottage cheese?

Do we stand like John Hersey's White Lotus on one leg, a great mass of us, refusing to move, refusing to work, until our leaders protect us?

Do we march on Jerusalem? In my memory, marches since Selma never garnered the necessary support to change much of anything.

And against whom do we mount our protest? Against the Israeli government, so used to obeisance to the West, it is gridlocked? Against the world that pretends friendship while aiding and abetting those who would destroy us? Against God Himself? How many times in the few years that I have lived in Israel have we filled the Kotel Plaza with crying, praying, beseeching souls, to no apparent avail? How many random acts of kindness do we need to catalog on High for our babies to stop being murdered in their beds?

I look forward to hearing of a leader emerging -- may he or she be the Mashiach, as we cannot bear much more of this, and retain our kedusha! -- a leader who will teach us how to join together in an effective form of protest against a world that will not be happy until we all die.

May we do finally whatever is required of us -- and I assume as I always have, this largely means working together as a family, forgetting our differences, speaking with respect to and with each other, even when we disagree. May Hashem finally be satisfied with our pleas.

Ad matai, Hashem? What do You want from us?
Posted by rutimizrachi at 20:51 No comments: