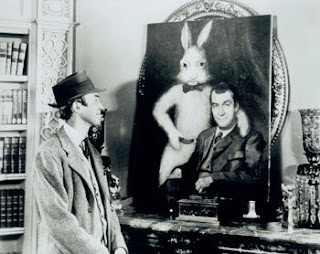 This one's called the Harvey Edition.  (Don't ask.  Let Jack explain it himself.)

There seems to be some argument over which number this one is.  Blame it on the fact that the host has also been running updates on the war in Gaza that are coming so fast, the folks at Twitter are calling him for advice.

If you are new to the blogosphere (meaning you "don't get the blog thing"), or if you want to hear something authentic about the matsav in Israel, rather than relying on only the MSM -- try getting to know some very good writers through Haveil Havalim.
Posted by rutimizrachi at 00:18

I e-mailed Jack about the Elwood P. Dowd thing, but he just winked in return.

It seems the Harvey explanation is almost as elusive as the wily Pooka himself. Great blog, though.

Old Jack has lost the last few shreds of his mind.