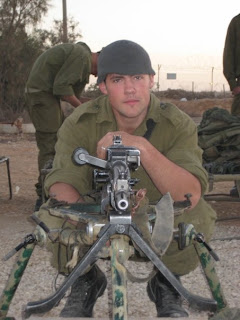 We made aliyah only a little more than a year ago.  And tomorrow our son comes home from his first war.

As my husband and I had served in the US military, we came to our decision with open eyes:  Israel has been a nation at war for as long as we have been alive.  While it is our opinion that there is no better place on the planet for a Jew to live, there is no sugar-coating the fact that all of our sons would probably wear IDF uniforms, and would probably experience the trauma of war.  Part of why we took so long to make aliyah (16 years) was dealing with this reality.

Did we have the right to put our kids into the apparent path of danger, simply to enhance our concept of a higher attachment to Torah?

We wrangled with this question through the First Intifada, through the Oslo War, through bus and cafe bombings, through the contempt of a "civilized" world that still smugly pontificates that "both sides must renounce the violence."  We discussed the tragic decision to use soldiers as policemen during the awful and stupid "Disengagement" which laid the groundwork for this current Gaza War.  If we as soldiers had been asked to choose between our mission to protect and defend our citizens, and our responsibility to respect and obey the government we represented -- what would we do?  More relevantly, what would our sons do?

It finally became clear that whatever tafkid (purpose, mission) we may have had in America was pretty well used up.  One day, as we listened to yet another ambulance shriek its way to the retirement home across the street, my husband said to me, "Ruti, I can't just wait for my ambulance to come.  I have a little more adventure in me."

Baruch Hashem, our sons had come to the decision that Israel is our true Home, even before we made the final decision.  So we did the move together -- not just physically, but as "one man with one heart."  One son even made the move a couple of years before the family -- the "point man" of the operation, as we say in the Army.

When he went to war with the Golani Brigade, we and his wife glued ourselves firmly in front of our computers and radios.  We attended closely to each news story.  Wanting to know everything.

Not wanting to know...

In the evenings, the men in my house watched war movies.  I listened to old time radio.  Comedies mostly.  That is how we coped between phone calls.  During the day, I blogged, and read the blogs of others, most notably The Muqata (for a reliable play-by-play of the unfolding war) and A Soldier's Mother (for damn fine writing about what I was feeling).  I didn't write too much of what I felt, because it didn't seem to be what my blog is about, and because my military training told me that staying positive through the mission is more useful than being scared.

Of course I was scared.

He would call when he was "back from the office," our code for when he was at the base just outside of Gaza.  We had lovely talks sometimes, philosophical grappling with the situation's politics.  He couldn't tell me much; and I didn't ask.  We honored the rules.  "No civilian phone line is secure."  Mostly, we just updated each other briefly.  I gave him news he was seeking; he just gave me his voice.

Every so often, we would get "the call."

"Ema, I love you very much.  I really love you."  He would say the words slowly and carefully, as if asking me to pay. close. attention.  This call was code for "I'm going back in; and I am terrified I won't ever speak to you again."  And my military/mom response was very cheerful, because that is my job:  "You are one of my heroes, Josh.  Your abba and I are so very proud of you.  You have been well-trained.  You know your job, and you are good at it.  Think about what is in front of you, and the guys on either side of you.  Remember For Whom you work.  That's all.  I love you very, very much."  This was the verbal form of polishing his shield and sword.  It was all I could do.

When I cried, after I hung up the phone, one of his younger brothers would come and hold me for a few minutes.

What do you say to your soldier son when he calls to fall apart over the devastating injuries sustained by a friend?  How do you comfort him when he shares his fear, his guilt, his empathy?

You cry with him.  You let him pour it all out.  And then you listen and silently applaud as he pulls himself together, as he sees visiting his friend and attempting to strengthen him as his next mission.  As he comes out of his pain, and comes back to life.  You know that his friend will probably end up comforting and strengthening him, as is so often the case in tragedy.  But you know that he will grow from this, as we are bidden to grow from the good and the terrible that Hashem puts in our path.

When the "cease fire" was initially announced, I was torn exactly in half.  I felt joy for my child, who would sleep in a real bed, inside of the first building that he had been in for three weeks.  I felt happiness for my daughter-in-law and for us.  But I was also disappointed, yet again, as our government ended another mission before it was completed.

Josh cornered the market on wisdom this time.  "Remember, Ema, that a Torah Jew knows that we can't solve this.  Not with politics, and not with fighting.  We soldiers are only doing a 'holding action,' until Moshiach will come and fix it."

We have all survived the first test of our commitment to this country.  How did this affect our younger sons?  One wants to come to Israel from the States.  "It's time, Ema.  I can't stay away any longer."  One keeps checking the calendar, to see if he is old enough to go into the IDF.  Like his big brother.  The little one just keeps playing football, wearing his Gush Katif kipah, and listening. 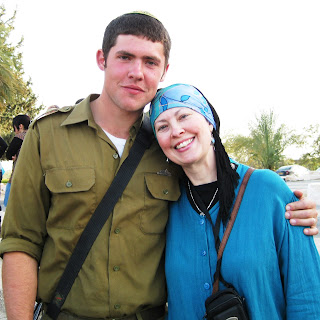 Please G-d, help us to stay strong and positive, as we await Your intervention.  Please help us to never forget that You run this whole show -- and that it will be all right in the end.  You have made certain promises to Your people; and You never lie.


Oh, yeah...  and please let our children grow to be really, really old men, intact and healthy, with great stories to tell their grandchildren.  Amen.

What a moving post. It ties in a lot of what we talked about, and told me about some things we didn't.

If our enemies aren't properly terrified of our soldiers, it's because they haven't met their mothers yet.

That was beautifully put. I'm wiping a tear.

Beautiful. Thanks for your wisdom! I spend my days out here fighting the ideological fight. I know there is a place for me in the war too... educating the leftist naive. But I forget my prayers have more power. Thanks for reminding me that no matter what I do, HaShem will weave His tapestry. We all are just strands in the woof and warp of his plan.

Each of our sons had their job in the IDF. Your son fought the enemy my son guarded a base in the Golan and prepared toe tags and body bags. All I can say is someday with the help of Hashem neither of our sons will be needed for these duties. Your post touched everything that I believe Hashem wants us to know. So please hug your returning soldier and all your children that they should never need the services of my son. I will tell my son that there is another of his friends that won’t need his services this time, which will make him rest easier. He said, “That all he could think of while doing his job that he is the soldier no mother wants to see coming to their house. I reminded him that his mom always wants to see him come home.

Ruti, that was so beautiful. Your emunah is so strong and an inspiration to those of us that sometimes struggle with it. I am so proud of your son, as is all of Am Yisrael.

West Bank Mama is doing a round-up of posts by olim regarding the war. You should submit this.

Since it takes us months to actually meet, we should start planning our next date.

Wow, that was so beautiful. I was also torn about the decision to retreat. However, I'm grateful Josh is coming back to his beautiful kallah and that the fatalities were few. You and Avi sure have done a great job of raising those boys. Kol A Kavode. Sandra

Ruti, I davened for your son and another chayal during the 'war' in Gaza. I am relieved to know that he is safe, B'H.

Wonderful post, I want to add it to my roundup.

Thank you Ruti for a beautifully written, inspiring & moving blog.