While all the earth's foundations shake

Yom rishon, 2 Adar aleph 5771.
If you don't have time to read this post, I won't mind.  Just go here and vote, before the contest ends TODAY: http://matzav.org.il/dellsocialinnovationcompetition/ Thank you so much!

The world is going crazy.  I didn't make that up.  You can see it for yourself.

We don't know what will be, from one day to the next.  There seem to be more natural disasters than ever before; and all about, world governments appear to be on the brink of splintering, shattering.

There is catastrophic illness, and increased crime and violence -- and poverty and homelessness are rampant.


And unless my facts are wrong -- and I'm dying for someone to prove me wrong -- there is not one homeless shelter in Jerusalem.  Magen David Adom hands out blankets, sleeping bags, and hot meals to the homeless and elderly.  There are soup kitchens, organizations that gather food for those in need, and individuals taking in the hungry and poor...  but there are no shelters.  Many poor people in the holiest city in the world live in the streets.


Young people, as in every generation, are struggling with finding truth, and themselves.

Amidst all of this chaos, it strengthens the heart when young people not only "get it," but do something about it.

"I first got exposed to this issue [of homelessness in Israel] when I came to Israel in 10th grade to complete high school. Ironically, the culture shock I experienced was not caused by the language differences or European influences, but instead by being exposed to such high levels of homelessness and poverty in cities like Tel Aviv and Jerusalem."
This is how Dovid Levine, a 20-year-old student in the field of Management and Logistics at Bar Ilan University, explains his drive to change the matzav -- the situation.


Dovid came to Israel in the first year of Jewish Agency's Naale Elite Academy Program for religious students. In Israel, he wasted no time getting involved: first as a Big Brother in a local school for children from abusive homes; then with Lev Echad Emergency Response Nahariyah/Haifa during the Second Lebanon War; and then on a more consistent basis in Sderot. He did brief stints of volunteering with One Family Fund, and for the Society for the Protection of Nature in Israel (SPNI), as well as helping out at several food packing plants and soup kitchens in Jerusalem.


My friend, Shev Zacks, described the project to me.  "We are trying to start a non-profit organization called the Matzav Center for Basic Needs. The Center is supposed to start off as a homeless shelter, and slowly grow into a place that will help those suffering from homelessness get the tools they need to improve their lives and change their situations.

"When I first heard about this plan, I couldn't believe no one had thought of it before. There is not ONE homeless shelter in all of Jerusalem. How is it possible?? We are all family - we are all supposed to look out for each other, and yet we leave our brothers lying on the streets with nowhere to go."


Shev Zacks is originally from Detroit. She came to Israel in 2008, attended a midrasha (an institute for Jewish studies for women) and then half a year on a kibbutz ulpan. She made aliyah the following summer, and did a year of Sherut Leumi (National Service) for Yavneh Olami - a non-profit organization working to help aliyah-oriented students. She started learning at Bar Ilan University this year, and is currently studying Sociology and English Literature.


I have known Shev for a around a year; and it doesn't surprise me that this spunky 20-year-old is working on a project to save the world.  Since I first met her, she has worked to bring other young people closer to Judaism, to bring the dream of aliyah alive for seminary and yeshiva students, and to convince people "too young" to care about Zionism that they are not only not too young, but absolutely critical for the future health of the Jewish State.


Shev elaborates on what inspired her to become involved in the project.  "The streets in Jerusalem are covered with homeless people. We've become so used to it, so callous and desensitized that we hardly notice them anymore. Their cries for money and the clang of shekalim in cups become punctuation in our conversations, their legs and blankets mere obstacles in our paths across the city." 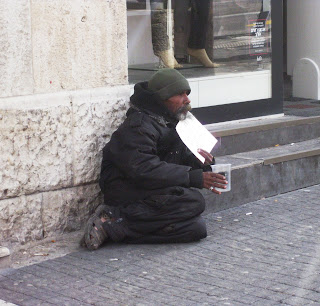 Dovid agrees.  "I had never encountered anything like it in my suburban NJ community. I couldn't understand how so many people suffered such a predicament and why not nearly enough was being done to help."  So what was his response? 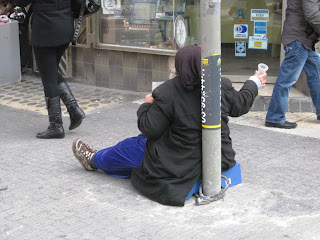 "Further encounters as I backpacked around the country over subsequent years prompted me to research the issue and get involved in several soup kitchens, food packing organizations, charities, and the like. However, the more I learned, the more I felt enough wasn't being done. Current solutions, I felt, were merely treating the symptoms -- not the underlying issues...


"We needed to think of a way to help people overcome their situation, or matzav."

The name Matzav is a hebrew abbreviation for Merkaz l'Tzrachim Basisim מצ"ב - המרכז לצרכים בסיסים. This translates to Center for Basic Needs.
I asked Shev what got her involved in this project.  "I personally got involved in Matzav because I know it can make a difference. I know we can change the lives of the hundreds of people who are living on the streets."  But because she is Shev, she doesn't stop at nice-sounding words.
"Right now, the main thing standing in our way is money. We've entered a competition to win $50,000 towards the goal of building a homeless shelter. We are currently in fourth place, and we need a few hundred more votes to reach the top. At this time, we have 538 votes - last year's winner had 2,700. We need all the help we can get to make our goals a reality."
So this is it.  You don't have to send money.  You just have to vote.  You can vote for this very worthy project to win the Dell Social Innovation Competition 2011 by clicking here: IMPROVE THE MATZAV!!!  It takes less than a minute to register and vote...  and there is only a little more than a week to win.  Please send this post -- or even just the link -- to all of your friends who care about making a dent in the world of homelessness in Israel. 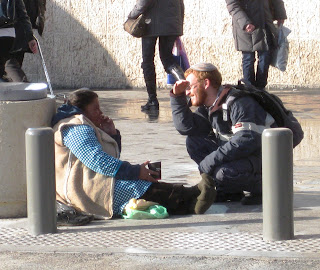 Shev touches a chord in every Jewish heart, certainly in every heart that has been moved by Jerusalem's poor:  "People are always looking for a way to make a difference, a change. This is it. Homelessness and poverty is something we're faced with every day - every time we leave our comfortable homes. This is the easiest chance to do something that impacts something so much bigger then all of us."


I am so proud of the passionate young people we have in Israel today.  They remind me that there is still hope, that the fight against evil and apathy may yet be won.  Maybe if we will just heed G-d's laws about how we treat each other, He will yet rescue us from the crises that seem to all but engulf us.


His requests are, after all, so simple:


Vote for Matzav.
Posted by rutimizrachi at 17:47

Voted. AND posted your blog post to my FB profile...beautiful. I, too, am shocked that there is not one homeless shelter in Jerusalem. We have a man who lives in a big packing crate behind a busstop, not far from where I work. We bring him food, but we can't do much more for him.

Voted already. Thank you for promoting this amazing cause little by little we will bring the redemption. The passion of the youth is a blaze.

Its funny one of the pictures on your blog; the one with the red boy talking to the elderly lady was a guy who was staying on my kibbutz, Sde Eliyahu, in the Bet Medrash program here. Yaakov. He had to leave to go study but he was an amazing guy. Its no surprise that you "caught" him comforting the hungry.

Posted to my fb and voted anyone know how often i can vote??

Excellent! Thanks so, so much for bringing this to LIGHT. I voted and sent my own personal email to my list asking them to do the same. Let's put the exponential power of the Internet to work for TOV!

Thank you for voting and posting, dear friends. Unfortunately, we can each only vote once -- but the power of the internet, as Shalomis says, is exponential!

Done, and even though I can only vote once, I've passed on the link through my blog, to garner a few more votes.

I have just voted too.