Silver Anniversaries. Some are tarnished. Some are golden.

We are awed by where G-d has brought us in our journey.

Twenty-five years ago, Jonathan Pollard went to prison.  Much argument has ensued over the decades about whether he deserved his fate or not.  But that man has spent 25 years in jail, for a crime that has held no other prisoner in a US jail for so long.

Twenty-five years ago, Natan Sharansky was freed from prison in the Soviet Union.  Like a boulder crashing down a mountain, the next few years changed the fate of Soviet Jewry forever.

Twenty-five years ago, our first son was born.  He was going to be a Heisman trophy winner, a great musician, a phenomenal chess champion.  (Okay -- a few years later, it became apparent we were putting too much on one kid; and we decided to ask G-d to give us a sibling for him, to share the burden of our expectations.)  Our eldest child and Natan Sharansky get a lot of credit for starting our spiritual journey.

Twenty-five years ago, our shul in Baltimore started to spread its loving and accepting brand of Chasidut. 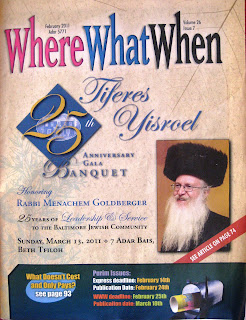 A quarter of a century.  Some of my kids can't even fathom that.  (Joel, Sam, Jason and Josh -- explain it to them, could you?)  Lives change, nations change.  A lot, in twenty-five years.

May we share another twenty-five years...  in peace and harmony and good health.

At depressing moments, I have to remember people like you.

Happy Anniversary, Ruti!
May your next twenty-five be even better!!
My love to you both,
Linda

Mazal Tov! May Hashem bless you with happiness, strength, joy, fulfillment, prosperity, continuing growth, many more adventures and only happy changes, till a hundred and twenty!

in the vanguard said...

May we soon hear the good news of Pollard's release. It's a horrible tragedy and hopefully will come to its end very very shortly.

Many congratulations on your anniversary! May you live to hit Gold and Diamond!

Your son is photographed with my greatest living hero - I still remember the day he was released. I wept for hours.

Awesome post, you make me smile, cry, and wish I was part of your family!