On Tops and Tales 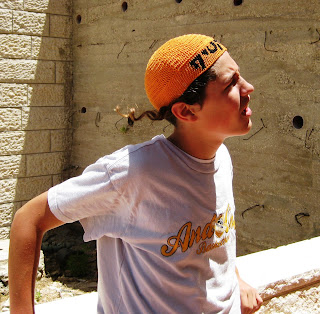 This post is about a kipah, and a visit with an insurance agent, which have nothing in common except that each took a little extra time -- and was worth it.

The hottest story of the summer in the Jewish Blogosphere very tiny cyberworld of Ruti's blog has been Sports Guy's dwindling Gush Katif kipah supply.

Let me take this opportunity to say that you may be a small readership -- but you are THE BOMB.  Readers gave guidance about where they though Gush Katif kipot could still be found.  Others made phone calls to people they knew who knew people, trying to get them professionally produced.  One of my favorite conversations went like this:  Holy Reader to Vendor:  "Nu?  Can you get us a few of the Breslov style orange Gush Katif kipahs?"  Vendor:  "I'll try.  How many do you want?"  Holy Reader tells the story of how Sports Guy doesn't want to stop wearing Gush Katif kipot until we get Gush Katif back.  Vendor:  "Oh.  Then he only needs one, right?"  That effort fell through -- but not for lack of trying.  "When Moshiach comes, it won't be an issue..."

A kid in the States offered to send his via airmail or courier.  And one amazing lady here in Israel offered to make the kipah for him with her own hands.

"Ye'he Sh'mey Raba Mevorach" is one of those friends you shake your head and say, "What nice thing did I do to deserve this?"  And then you realize that she is just that good a friend to a fellow Jew.  When we first came to Israel, hers was one of the first families to feed us.  They helped us to make connections.  And when I started my blog, she was one of the earliest to comment and encourage.  And now she made a kipah for my 14-year-old son, based on the photograph in the blog post -- and she won't accept an agarah for it.  Sports Guy is thrilled.  Color commentary on this latest sports story:  "I'm really loving this kipah.  It fits great.  It's got great color.  It can really go the distance."

If only Ye'he Sh'mey Raba Mevorach could know how much she taught my sons with this loving effort.  Thank you, Devra.  May you reap many rewards, in this world, and in the World To Come.

As I have suggested before, don't try to get more than one bureaucratic thing accomplished in Israel per day -- and expect every accomplishment to take two visits.  I did not make this up.  It was advice given to us prior to aliyah.  Life experience has proven it to be correct.  So, we heave a heavy sigh, gather up our intestinal fortitude, and slog our way to this week's current incompetent bureaucrat or inept businessman, right?

In America, you can get business done, chik-chok.  When you are done eating your meal, the waiter is there with your check.  (Maybe even sooner.)  When you go to get some piece of bureaucracy handled, you can get in and out quickly (once you get through the lengthy period in the waiting room -- the actual business usually takes a laughably short time).  In Israel...  your waiter gives you perfectly fine service, until it's time to pay the bill.  Then you have to hunt him down.  And when you go to buy an airline ticket or to get car insurance...  you get right in to see the fellow...  and it takes two hours to get out of his office.

Is this because he doesn't know his business?  Chas v'shalom!  It is because A) he is interested in your life, as a fellow Jew; B) he's probably going to have to untie some complicated bureaucratic knot you've gotten yourself into; and C) he has a story to tell you.


The diplomas and awards on David Cohen's walls share space with photographs of David skiing, photos of his family, and of the Lubavitcher Rebbe, zt"l.  He is happy to show photos of our friend who recommended him, who happens to be his nephew.  He shows family photos of a recent bar mitzvah.  When we share our photos and tell a bit about ourselves in response to his questions, he shows more photos of windsurfing with a US Army friend.  (We think of a dear retired Army friend who could easily get along with this guy.  We may work an international business shidduch...)  He gives us chocolate.  (He would have given us coffee.  He probably would have fed us lunch.)  As he's untying our personal bureaucratic knot, he tells us his story.

David's father was a rabbi in Egypt.  He was born in the year of the First Zionist Congress in Basle, in 1897.  In 1952, during the military coup d'état that brought Nasser to power, Rabbi Cohen fled with his family to Palestine.  When the 1967 war came about, the 70-year-old rabbi wanted to do battle against the forces of evil.  Instead of a rifle, his weapon was tefillin:  David remembers his father staying in tefillin during the entire six days of the war -- "even sleeping in them."  [Ed. note:  Please don't talk halacha to me just now.  I am in awe of someone so holy that he battled darkness with the light of tefillin.  I cannot know his level of holiness.  I am certain his dear son also held him in such awe.]

In 1992, David Cohen went back to Egypt, to visit and photograph his father's beit knesset.  He was not allowed by the Egyptians to enter; but he was permitted to take photos through an outside window.  His camera discovered, under the dust of disuse, that the seforim and other holy objects that had been abandoned had been left untouched by the Egyptians, just as they had been left hastily by the fleeing talmidim.  The Egyptians' fear/respect/awe of Hashem seems to be genetic coding from Paroh who, though he defied Hashem, finally came to know and fear Him.


The short summation of this story is that there are extraordinarily cool reasons why things take too long in Israel.  Come with a positive attitude, and some extra time in your schedule.  It's worth it.  And if you need a really great insurance guy, let me know.

@*@*@*@*@*@*@*@*@*@*@*@*@*@*@*@*@*@*@*@*@*
Glossary:
Ye'he Sh'mey Raba Mevorach:  "May His great name be blessed" -- from the Rabbi's Kaddish prayer
Agarah:  the coin representing 1/100th of a shekel
Chas v'shalom!:  Heaven forbid!
Shidduch:  a match-up (usually means for marriage; but it can refer to other types of partnership as well)
Tefillin:  phylacteries
Halacha:  Jewish law
Seforim:  books, specifically holy books
Talmidim:  students
Paroh:  Pharoah, who is said to have survived the drowning of his army at the Red Sea, in order to be a witness to Hashem's greatness

You are making me cry. Tears of love and laughter and joy, though. I am THRILLED to PIECES that he likes the kippah.

Some of the best chassadim are easy for the doers and infinitely precious to the receivers. A smile, a kind word, a package delivered (THANKS AVI!) and even a kippah. Baruch Hashem.

Mutual admiration society, Ruti. You inspire me, enlighten and uplift me, and your friendship is all the more precious for the fact that our face-to-face meetings are so far and few between. I couldn't believe my blessing in seeing you guys in the bus station that day.

Keep writing woman! And let me know when he's ready for the "Team Mashich" kippah. :)

I'm so happy that you solved this, I know how much it meant to him. Does your wonderful friend custom-make regular crocheted kippot for pay? I'm looking for someone to make a kippah for Meged for his bar mitzvah. He's never had one with his name on it, for obvious reasons.

I love the new kippah! Quick sewing job on someone's part and a great lesson for us all.

I thought it looked particularly bright.... when I spotted him all the way across the Yishuv!

Ruti, I love this!

Your son and the kipah look great!!

sports guy is starting to look like a "tiger" (get it? Orange is my favorite color so he is still alright with me!!!
looks great! i am SURE there is alot of t.l.c. in it and he should wear it in good health..zie gezhundt!

"mi k'amcha yisroel!!!" well done sports guy for staying firm in your beliefs may the z'chus of your determination and that holy sisters handy work and care for another yid bring back the speedy redemption of gush katif and all of israel!!

Happy that Sports Guy got his Kippah. What I can't decide is, does he look more like you or your Dearly beloved? He sure has a great smile (feel free to embarrass him by telling him so!).

Michael - Sports Guy's attitude is EXACTLY why I was so happy to make the kippah!

Oh and Karen - when is the bar mitzvah? I usually work in yarn, not the thin kippah thread that is much better for names and designs. My eyes are getting too old to do that fine crochet work. ;) But if I have enough lead time I might give it a shot...

So happy your son has a new Kippah--may he be able to take it off soon!

Loved the story about David Cohen. Where is he located?

What smiles I got, reading all of these comments! Thank you. And Baila -- I love when the kid in the front row asks the right question: David Cohen's office is located in Talpiot, at Rechov HaMusachim 5.

Heh,heh. Except I was always the kid slinking down in the back :-)

And Ruti, yes, your readership rocks. Ya know why? Cuz you're someone we wanna be around. Someone we wanna hear, learn and laugh from. More to say, but mushiness is the limit.