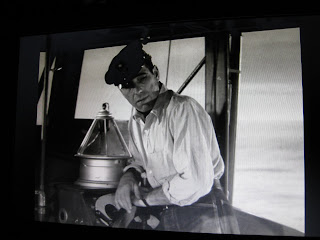 A few nights before our friend Baruch returned to the Old Country to finish packing for his family's aliyah, we treated him to the only "drive-in" movie that we know about it Israel.  Our kids never experienced drive-in movies; so we had to explain the concept.  We also had to explain how you can have a drive-in movie without a car. 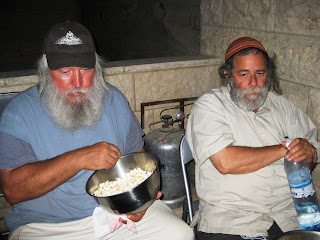 Anyway, for The Dearly Beloved and Baruch and me, the experience was as authentic as possible -- but with an "only in Israel" feel.  We set up the laptop on a folding table on the mirpeset.  After dark, of course.  We used little portable speakers which simulated the sound-quality of those little rinky-tink speaker boxes one used to hang over the driver's window in the olden days.  We had popcorn.  We had water instead of soda pop (because we are conscious at this age of wanting to live longer).

We had wanted to show the original version of The Day the Earth Stood Still; but the projectionist couldn't find the DVD.  So we were stuck with To Have and Have Not, which would have been a stupid film -- due to poorly written dialogue that could only have been penned by Ernest Hemingway, and badly re-written by William Faulkner (who used to throw away bags and bags of mail when he was a postman, by the way) -- if it weren't for Humphrey Bogart and Lauren Bacall, and the sweetly helpless and hapless Walter Brennan.  (Okay, and I'm a little partial to the Hoagy Carmichael "Cricket" character, too...)

There was a baby crying in a car behind us.  (Well, actually it was crying in its bedroom next door...)  There were young people congregating and shmoozing.  (They were shmoozing in Hebrew, which I don't remember happening back in my old home town.)   There were cell phone interruptions, which also didn't happen back in the olden days -- and the pièce de résistance:  the IAF decided to have a particularly vigorous exercise overhead during one of the quieter scenes.

All in all, we had a wonderful time, in spite of falling asleep one by one.  (I don't know if it is old age, or if one really begins to expect better writing when one gets older and frummer.)

The last man standing thanked the projectionist when he turned in the little speaker box, and drove us all home.

I hope they're showing a better picture next time. 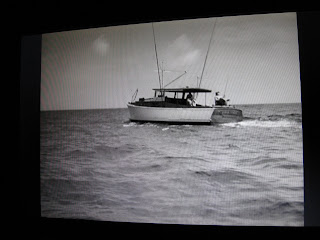 Tzetchem l'shalom, Baruch.  We'll be happy to greet your family when you arrive on eagle's wings, in a little more than seven weeks...  Hmmmmm...  Something "Jubilee-esque" about that...

*One of the few really good lines in an otherwise disappointing classic.  The other one is "You know how to whistle, don't you, Steve? You just put your lips together and... blow."

If you want to enjoy a great movie, go back to 1951, and catch The Day the Earth Stood Still.  One of my all-time favorite pieces of dialogue is from that film:


Bobby Benson: [indicating grave marker during a visit to Arlington] That's my father. He was killed at Anzio.
Klaatu: Did all those people die in wars?
Bobby Benson: Most of 'em. Didn't you ever hear of the Arlington Cemetery?
Klaatu: No, I'm afraid not.
Bobby Benson: You don't seem to know much about anything, do you, Mr. Carpenter?
Klaatu: Well, I'll tell you, Bobby, I've been away a long time. Very far away.
Bobby Benson: Is it different where you've been? Don't they have places like this?
Klaatu: Well, they have cemeteries, but not like this one. You see, they don't have any wars.
Bobby Benson: Gee, that's a good idea.

wait a minute...that was MY baby, right? the only one I could think of that would be close enough to disturb. Sorry! arielle

LOL! Of course it was. Your children figure prominently in all of the special outdoor moments at Chez Mizrachi -- whether they are reminding us that bed time is still a drag in their generation, or clamoring to play in the band. Have I told you enough how cool it is to have neighbors who not only put up with us, but periodically appear en familie at the window as our own personal audience?

Do they have a flight yet? You said 7 weeks, I'm hoping maybe it's the one that I'm already planning to meet. Being at the airport at 6:30 am, aka the middle of the night, is something that I would like to consolidate into as few trips as possible each summer, even though I wouldn't miss being there for people for anything. It meant so much that people were there for us, even though I felt like a "fake oleh".

You are so funny, Karen. Don't you know that "coming Home" is coming Home -- even if it takes a coupla tries for it to stick? Just like we're all ba'alei teshuva, we're all olim chadashim. Welcome Home.

They are coming on the late August flight. See you there!

Let us know when the next showing of The African Queen is...

Who are the folk in the first photo?

Since the first one is the dearly beloved of Lauren Bacall, I'm assuming you mean the second, which is a photo of MY Dearly Beloved (in blue, on the left) and our dear friend, Baruch, who will be making aliyah with his wonderful family in coming weeks, bs"d.

What a coincidence. We were watching the same movie recently at Mom's. I liked that she kept calling Bogey's character Steve when everyone else called him by another name. BTW-I was actually stung by a dead bee a few weeks ago. Ouch. Ain't that some'in?

On the subject of Bruce's family's upcoming aliyah...we're going to miss them terribly but we're so happy for you and them. It just adds to the magnetic pull to go East, man.

Hi there!
When are you showing "Dr. Strangelove"? Been a while since we watched that together.
Cheers, Lisa