Cherries! Like little hearts bursting wth love for this Land... 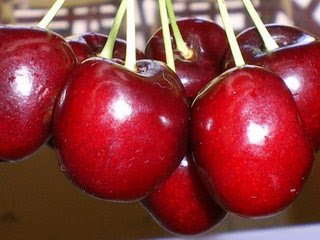 I did not pick these cherries at the currently ongoing Gush Etzion Cherry Festival. A sensitive anesthesiologist-cum-blogger nicknamed QuietusLeo (aka "The Sandman") took the shot on a recent trip with family and friends.  I easily convinced The Sandman to share his excellent photograph of the cherries with the promise of a story...

The Dearly Beloved brought me to Israel for my first visit in 1991.  This little vacation of nine days (from July 4 until July 13 -- it was so special that I still have the dates locked in memory!) was to replace the honeymoon the US Army didn't schedule into its plans six years earlier.  By now, we had two little kids.  We could not have made this trip without the loving and competent help of my dear Mama, a"h, who kept the kids fed and entertained while we were away.

My dear husband wanted to show me the exciting tourist vistas of Israel that he had seen on his two previous visits.  He wanted to show me Masada and the Dead Sea, and the locale of The Good Fence.  His memories there in the Eighties were very powerful.  With the knowledge he possessed as a US Army officer, he argued with the old fellow in the kibbutz about the sounds he had heard the night before.  "Why were track vehicles [Army lashon for 'tanks'] moving late last night?  And where are all your young men?" the Dearly Beloved asked his host.  "Ehhhhhh...  those weren't track vehicles you heard.  And our young men are... you know... just out and about."  But my husband knows his stuff.  Only later did he learn that he was an aural witness to the beginning of the 1982 war in Lebanon.

But that was history.  I wanted the "now" of Israel.  I was already imagining living here.  (I promised I would visit the tourist places with him after our aliyah.)  I wanted the "thrill" of visiting the kupat cholim clinic with my friend, as she took her child for a checkup.  I wanted to wait in line at the bank, just to see if  I could cope with Israeli bureaucracy.  (Fortunately, US Army bureaucracy, with its "hurry up and wait" regimen, had prepared me to survive here.  Insider's tip:  bring a thermos of coffee, a good book, and a positive attitude.  You will meet nice people, and actually have time to get time to know them.  Don't expect to accomplish anything in less than two visits; and don't try to cross more than one bureaucratic hurdle per day.)

I shlepped my long-suffering husband around with me and our friend, Naomi, as we visited the makolet, the health clinic, the bank, and the shuk.

The shuk is why this story is all about cherries.

Our Israel-savvy, holy-but-worldly hostess showed us from which stalls in the shuk to buy.  She picked up vegetables at one stall, fruit at another...  With her guidance, we bought grapefruit that was so perfectly ripe, it seemed to fall open in our hands; and the sweetness made it taste closer to its cousin the orange than to its sour brothers we had encountered in the States.  But it was the cherries that made Naomi cry.  When she watched The Dearly Beloved -- no longer a lad at 43 -- turn into a small, delighted boy when he tasted those cherries...

You have to know that my friend Naomi doesn't cry easily.  She isn't one of those folks who sees a Hallmark card commercial and gets all misty-eyed.  But when she saw forty years drop from my husband's face at the remarkable sweetness and holy perfection of a cherry at its peak of red, ripe lusciousness, as if he'd never tasted anything so unbelievable, a tear came to her eye.

To this day, nearly twenty years later, Naomi gets a bit emotional when she buys cherries.

And she and her love of this Land and what G-d causes it to produce get a big chelek in our success here.  She taught us that what makes a successful aliyah isn't how well you can transplant your little chunk of America in Israeli soil.  What matters is how much you respect what Hashem gives to His Land, and His people in the Land, just as it is.

What if the meraglim had said, "Hey, Moshe!  See these really big grapes?  We can make really BIG wine..."

Glossary:
Kupat Cholim:  health care provider
Makolet:  neighborhood grocery store, a "mini-mart"
Shuk:  open-air marketplace
Chelek:  portion
Meraglim:  the Spies who came back from Canaan with an evil report about the land, planting doubts about their people's ability to wrest the land from the indigenous peoples  -- forgetting that G-d had told them to do it, and that He was on their side
Posted by rutimizrachi at 09:34

Very touching story. I'm honored that the photograph is a match.

My children live on Kibbutz Rosh Tzurim and for many years we would visit them when the cherry festival was in full swing. The cherries that grow in the Gush are the best cherries anywhere!

"What makes a successful aliyah isn't how well you can transplant your little chunk of America in Israeli soil. What matters is how much you respect what Hashem gives to His Land, and His people in the Land, just as it is."

I'm putting this quote in my Facebook profile (with attribution of course). I hope you don't mind.

The only thing is, can I still go to Target, once in a while? :)

You know, Ruth, I've noticed that everything's brighter after I read your blog (like the next page I go to). Thanks for helping me see the light, hon.
Love:),
Shalomis

I love this post. I'm sending you an email with a story about standing in line in Israel. I think you might enjoy it.
Big hugs from down under.

Now I'm really annoyed with myself that I didn't go the festival this year. We went last year and had a great time and this year...don't know what happened. Glad I could re-live through your words.