One of those days. No! I mean the GOOD kind.

It was a people day.

I met my friend Leslie, visiting from Pittsburgh.  Like me, she is married to an exceptional person, who understands her need to be in the Land for "just one more week." 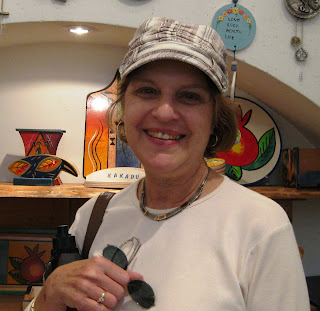 Leslie and I first met last year at a Pittsburgh simcha of people we mutually love.  She struck me as bright and articulate, with a slightly hidden sense of humor that was all the more delightful for not being on the surface.  So when she called and said she was in Israel for a brief stay, I looked forward to deepening our friendship.

Approaching the recommended restaurant, we passed a musician whom I am accustomed to patronizing with a small tip.  As I dropped the shekel into his tray, he gave me his usual nod of greeting, smiling behind the ever-present sunglasses.  Leslie tipped him, too, and promised an explanation of why she never passed up this particular tzedakah.

As we dined together on quinoa salad and a nearly-sufficient amount of coffee at Café Hillel, she told me her captivating story.

On the day of the Sbarro pizzaria bombing in 2000, Leslie and her husband were a few blocks away in Yerushalayim.  Like Jews everywhere, they were stunned and deeply affected.  Suddenly, both of them thought of the musician who always sat in front of Sbarro, who had nodded to them with his customary smile when they dropped change into the small box he displayed for the purpose.  "I wonder if he is okay?!" they frantically asked each other.  Like all of us, they dealt with the pain and horror of the situation by thinking of someone they knew.  The enormity of the loss is too great for us to be willing to see the whole picture -- it is easier to fear and grieve in the concrete rather than the abstract.  Later they learned, to their amazement and relief, that he had not been at his usual location that day.


To Leslie and her husband, this fellow and his music represent life continued.

I did not speak of it, nor did I give it much thought until later.  But a photo tag line nibbled at the back of my mind as we left the restaurant.


The terrorist attack at Café Hillel in Jerusalem, which killed seven Israeli civilians and wounded more than 70, September 9, 2003.

When I bid Leslie a warm farewell, I dropped back by "our musician," and asked him if I could take his photograph.  He rewarded my second shekel of the day with his usual cheerful smile and nod. 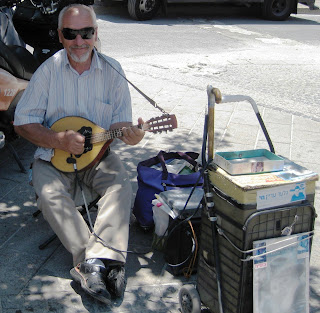 After our visit, I was at loose ends.  Sunday sojourns are supposed to be with the Dearly Beloved; and he was still busy moving Soldier Boy from one apartment to another.  Still seeking the elusive Gush Katif kipah, I wandered into a "new" kipah store. 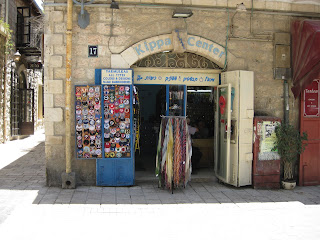 How surprised I was to see my old friend Maya from Michael's Kipot on Yafo Street --  in an airy, new establishment -- right across from Soldier Boy's very first apartment in Nahalat Shiv'a!

Maya asked her daughter to forgive her for ending their call abruptly.  A "favorite customer" had entered the store.  (Maya used this expression generously.  We chat more than I buy.)

We shared much happy news:  I had not been able to see her since I became a new grandmother; and she had the same wonderful news to share, as well as an upcoming wedding for another child.  Maya is good for me, because only the first two or three sentences of her conversation are in English.  Then she reverts to excited Hebrew, of which I get about a third.  But she is so expressive  -- whether we are sharing our children's joys or their sorrows -- I can "understand" her, without knowing all of the words. 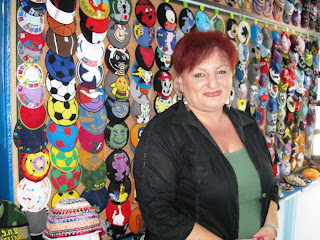 When we had exhuasted our wealth of family information and exchanged brachot for health and happiness and grandchildren and long life and success in business, I left, much happier than when I'd walked in.

Afterwards, I dropped in to the Gush Katif Museum, to see if maybe they had a kipah or two.  No such luck.  But the young woman at the desk, Chedva, patiently listened to my broken Hebrew (illustrated with photos I was carrying of my kids), as I explained the kipah quest to her.

What a nice young lady!  She put my phone number and name into her cell phone -- "Ruti Kipah," she called me -- and promised to let me know if she could find a kipah for Sports Guy.  (Stay tuned for a followup post on the amazing people who have been trying to help solve this little problem.)

It seemed like a good time to go back to our mountain.

At the tachana merkazit, I met another friend, formerly of Baltimore.  She shared an interesting and stressful day, which we both ended up rolling our eyes and smiling over.  Then she pulled a lighter out of her bag.  "Before I put my daughter on the bus, she saw me purchase this lighter from the Five Shekel Vendor you introduced me to."  My friend got a twinkle in her eye, as she related her daughter's response.  "Ema, you don't smoke!"  She took great pleasure in explaining to her daughter the importance of supporting this "businessman," who sells arguably useless wares that break almost immediately inexpensive items, rather than simply begging.  We had a lovely few minutes, before it was time to say goodbye for the day, and catch our respective buses home. 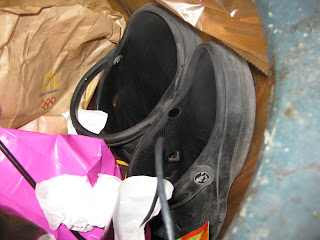 Just before my bus arrived, I saw an interesting sight.  In one of the nearby garbage cans was a pair of very large Crocs.  They seemed to me to be in good condition.

Across the room, I watched one of the old fellows who pokes around in trash cans for plastic bottles to turn in for agarot.

By the way, Pittsburghers...  Leslie has a "modest women's clothing" store.  Get in touch with her when she gets back, and see if you can up her bank balance for another trip to Israel soon.  I miss her already -- and you'll like the clothes!

Dearly Beloved missed being with you. I love our days together and always look forward to the next. But I think you had a great day connecting with other Jews. This is how we end this long exile.

I just found out that my wonderful wife is the friend from Baltimore!

From The Basement Of The Science Building

Ruti - I'm at the "Gush Katif" part of the kippah. I'm a little worried that the letters aren't going to look nice. But I hope to finish very very very soon! It looks different. Crocheting is very different than knitting. The work has gone quickly - I just had several days when I couldn't put any time into it. So if he likes it, every so often I could do another one. :) I'm praying mashiach will come before I'm done.

I seriously need to know where Leslie's picture was taken because I have a potent desire to acquire the bowl decorated with a rimon that is viewable over Leslie's left shoulder.

Dearly Beloved: May it be soon. And may our outings together be infinite.

FTBOTSB: I love when people recognize their Beloveds here!

Ye'he Sh'mey Raba Mevorach: You will soon figure prominently in "The Holy People Who Saved Dani's Head" post. G-d bless you, and all your children and grandchildren...

BatAliyah: I love helping Jewish businesses! The shop is called The Gans (or something like that, with a drawing of a goose on the old-fashioned wooden sign)... We'll shop there when you come to drop those big American dollars in this great country. (You have to have heard that last sentence in the accent of Steve Martin and Dan Akroyd's "two wild and crazy (Czech) guys" for it to work...

What fun to have made it into your blog. Thanks for promoting my shmatte business in Pgh. and for posting my picture.I look forward to seeing you often, in Israel or Pgh., only for simchas.

I love that shop!!!!!!!! But don't go in there with a big handbag, or you are in danger of knocking things over. Don't go in with a big wallet either, or you bag will become large with the the things you have to carry out in it!