A heartfelt plea from an exhausted mother 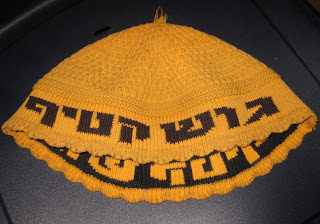 I'm calling in any markers I have.  This is serious.

The Sports Guy (pictured below with his beloved Rav from the Old Country) is down to his very last Gush Katif kipah. 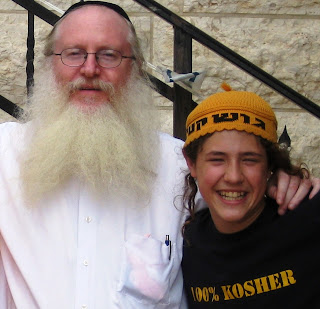 As the mother of any teenangel knows, when they get an idée fixe, nothing will get them off of it.  (Maybe they'll outgrow it; but I wouldn't bank a good night's sleep in the near future on that.)

As you can see, the kid is cute, but the kipah is looking just a little bit ratty.  It's time for a change.

"No thanks, Ema.  I like this one."  This response is delivered sweetly.  No teen "'tude."  Who can complain?

The truth is that I started scouring all of the kipah shops in the country as soon as he was down to only one left, because I remember how he was about giving up certain "comfort toys" as a little kid.  But I have not been able to find a single Gush Katif kipah  (large size, not the little knit doilies -- he doesn't like those either) anywhere in Israel.

"Here, Honey.  Here is a kipah your brother gave you, from the IDF.  Won't that be a nice occasional substitute, just so I can wash the other one now and then?" 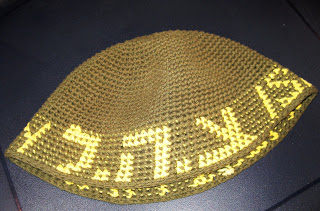 "Sure, Ema.  But just until you're done washing it.  Thanks!"  No soap, pardon the pun.

Now I get a little Ema-'tude on.  "Okay, young man.  It is very nice that you are comfortable with your 'look.'  I've always been proud of you that you kept your peyot when some of the kids your age were making fun of you, and trying to get you to cut them.  I like that you wear the kipah you like, even if it isn't like everyone else's.  (Besides, I can always find you in a crowd.)  But it's getting beat-looking.  Couldn't we shop for another nice, big, orange kipah?"

Now he looks a little thoughtful.  And my fourteen-year-old gives me a lesson in purpose, and in dedication.

"Ema, it's not about the orange, or that it's kipah serugah.  I don't want to stop wearing it until we get it back." 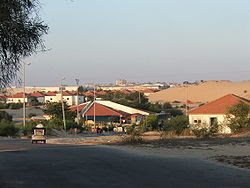 So here's my request:  Somewhere in Israel, or in America, there is a Gush Katif kipah not unlike the one my young hero currently wears.  I really need a replacement, folks.  If you happen to have a spare one lying about, let me know.

The future peace at Chez Mizrachi may depend on it.

Thanks for listening.  And may Sports Guy's determination pay off.  May we share the good news of the rebuilt Gush Katif, speedily and in our days. 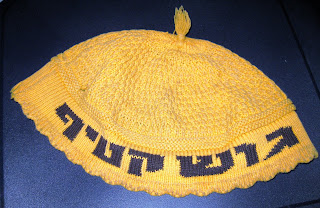 Glossary:
Gush Katif:  a group of Jewish communities begun over 40 years ago on the empty sand dunes of Gaza.   In those days, the Arabs welcomed the Jews there, wondering why they would want to build homes on such "godforsaken land."  Four years ago, these beautiful communities were destroyed, and the land upon which they were built was made Judenrein.
Peyot:  the long (or short) sidelocks worn by many Torah-observant Jews
Kipah serugah:  a knitted kipah -- in Israel, very symbolic politically
Posted by rutimizrachi at 08:56

In a world where so few stand for anything, and those who do can usually be convinced to change for the right price, Dani stands as an example to the rest of us of how to stand by one's convictions. **TAKE A LONG, HARD, LOOK BIBI!**

May you be matzliach in finding one more, and may that be all it takes before we get Gush Katif back!

I went to a few shops on my last day/night there to look for one.

There's a kipa store at the end of the open street in Machane Yehuda, on the corner of Agrippas. Did you try there?

Last time I saw them was on a large table in the middle of the entrance level of Tachana Merkazit. They may also sell them in the kippa embroidery store on the first block of Mea Shearim St. (coming down from Kikar Shabbos) on the left side of the street.

We have a couple, too, but aren't giving them up, sorry!

I'll keep my eyes open, but what if I CROCHET HIM one? Love that dedication...

It might not look exactly the same, but it'll say "GUSH KATIF" and it'll be big and orange...

Ask him. It would be my honor.

Just posted a few ads on luach.com for the kipah. Maybe between all of us, Sports Guy will have a few kipahs to choose from. May the day come soon when he can buy a different kipah from a store in Gush Katif!

1) this morning i go to shul at at unusual time and run into baruch orman who is just back from neve daniel and on his/their way to aliyah.
2)when i pull in the driveway i get a call from someone in the neighborhood who we have never shared a shabbos meal with, he said: "as you know, we are making aliyah soon. the lift emptied our house this week, our shabbos plans fell through. can we eat by you tonight?"
3) then i read about this kid and his kippa made out of 100% jewish commitment.
4) and it's parshat shlach.
is Hashem trying to tell me something?
thanks dani
and ruthie and avi too.
shabbat shalom
from deep in galut
shimon

way to go dani stay real to what you believe but a jew is suppose to look like a king. however sometimes when a king kingdom is overturned or in this case turned into a pig farm the king then dons dirty clothes to proclaim his sadness look at mordechai hatzadik so i hope we rebuild our kingdom so you can wear a your royal clothes again!!

I have some really cool hats from New Orleans!!!!! But I vote for the hero who is willing to knit him a new kipah. Good luck.
Bintou aka Tiger

Ruti, I forwarded your post to all the lists that I'm on. Did anything come of it? Please update us when you find one. I'm checking every kippah stand that I see ....