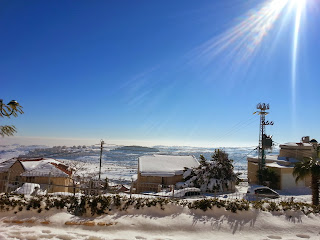 If you live in Baltimore, New York, Idaho, Washington State... this is a typical winter day. But if you live in Israel, this is a once-in-several-years occurrence.

People have been without power for days, at least intermittently. Cars are buried in snow. Schools are closed. The roads have been virtually impassable for the better part of the last few days. 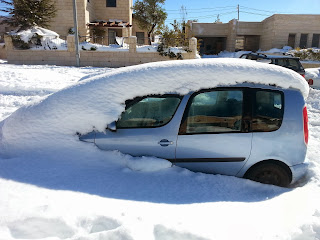 Families are spending quality time together. Kids are thrilled, or are showing signs of cabin fever. I've even seen a soldier or two giving a hearty fist-pump at being stranded on the mountain. We had a special birthday Shabbat planned for the Dearly Beloved. That, as readers of this blog may remember, does not mean birthday cake. The Friday night menu included a cheesy lasagna, fluffy, home-baked challah, and cinnamon rolls. But with no electricity on Friday, the plans changed to a complete stove-top menu (so I could get by on gas): a hearty chicken soup with lots of vegetables, cauliflower rice, baby peas, barely warmed, and paratha, an Indian pan-fried bread. The pot roast which is usually prepared in a crock pot was instead prepared on the stove top as well; and everything was kept warm on an old-fashioned copper blech.

Stunt Man had planned to spend Shabbat in Jerusalem with Molly McMolly's family. Of course, that was illogical, impossible, etc., etc. 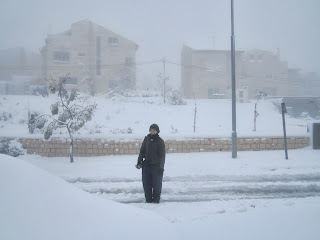 So he walked down to the highway to see if he could possibly catch a tremp. A security vehicle came along, and the driver -- after questioning his sanity -- gave him a lift. They traveled down a completely vehicle-free highway, stopping along the way to assist stranded drivers. "There were abandoned cars all over the place. I felt like we were traveling through some surreal post-zombie-apocalypse scene," was how he described his adventure. The driver dropped him off two minutes from his destination. 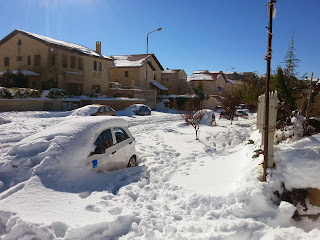 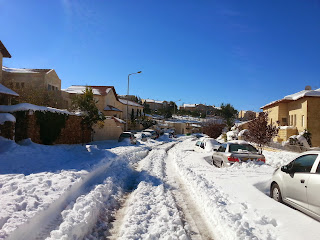 We have a very special community here in Neve Daniel. People have helped each other, by digging out paths from door to street. People have shopped for those for whom getting out is a hardship. After pulling his stint as the shliach tzibur for a local shul, Yoram went to open the makolet... and was joined by store owner Moshe Torjman. Moshe left his cozy home in Gilo on foot (on his birthday), planning to walk to the makolet if he couldn't get a ride. A policeman gave him a ride to the bottom of Neve Daniel's formidable hill, where he walked up to open the store. 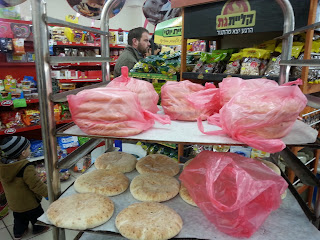 Moshe fired up the oven, so people could have nice, warm pita bread.

Nobody who doesn't own a helicopter is surprised that the makolet doesn't have fresh milk. 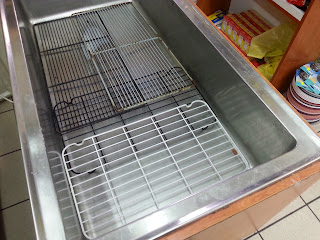 But as a public service announcement, I'll offer some alternatives, to get folks by until the milk truck can make it up the hill.


Everyone has his priorities. People with small children came to the makolet, hoping to make a milk run. Without young children at home, we made a B - double E - double R - U - N, as the country song goes. 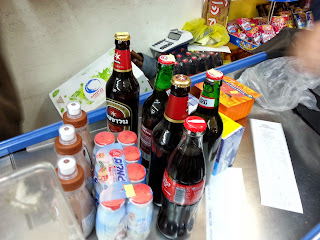 Finally! A home we may be able to afford on the yishuv. As soon as we find out who is the builder, we plan to make a bid. Hopefully before the house turns to liquid assets... 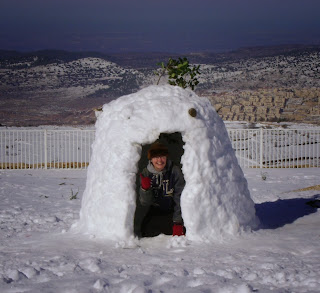 And before a rival buyer makes his bid. 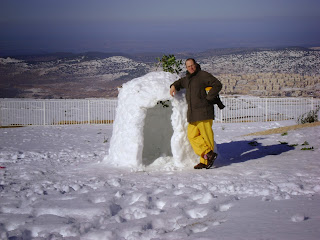 Stay warm. Enjoy each other. Let your neighbors know if you need help. One thing about snowy weather in Israel: in a few days, it will be a memory for a few years.
A few snow-survival tips from a former Washington State gal:


Glossary:
Blech: Flat metal pan used to cover stove burners on Shabbat, to warm food without direct contact with the flame
Tremp: ride, hitch (as in hitch-hiking)
Shliach tzibur - cantor and leader of prayer
Shul - synagogue
Makolet - corner grocery store (although we are calling ours this affectionately and out of habit these days, as Moshe has made it into a supermarket!)
Yishuv - community, sometimes called a settlement (sometimes disparagingly -- but we ignore those people)