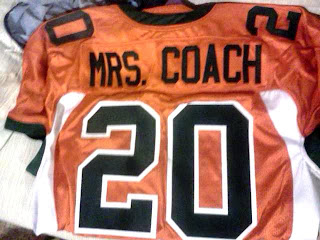 Mrs. Coach has a confession to make. I don't know anything about football. I never watched it when I was growing up in America. I don't understand it, and I don't didn't even particularly like the sport. I'm a baseball kinda gal -- which my sons tell me "doesn't actually qualify as an actual sport." George Carlin sums the differences up in a five-minute comedy bit that ends with this:

"In Football, the object is for the quarterback -- otherwise known as the field general -- to be on target with his aerial assault riddling the defense by hitting his receivers with deadly accuracy in spite of the blitz even if he has to use the shotgun. With short bullet passes and long bombs, he marches his troops into enemy territory, balancing his aerial assault with a sustained ground attack, which punches holes in the forward wall of the enemies’ defensive line. In Baseball, the object is to go home, and to be safe. I hope I’ll be safe at home, safe at home."

(It's really worth hearing it in Carlin's own unique style. Don't worry: for this one, he resisted the impulse to use any of the seven words you can never say on television.)

I was never a fan of American football.

But I love American football in Israel.

I love it for several very good reasons. 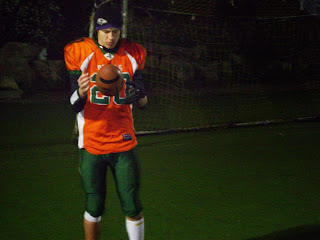 My son Sports Guy is truly good at the game. Hashem gave him the gifts that he can play several positions well, and still behave like a mensch. (His mother gives him the bracha that he will be able to continue both activities in equal measure.)

Take six minutes, and watch Number 20. Even if, like me, you don't understand the game, you will enjoy watching this kid move. It's okay -- I'll wait for you.

Another of my sons, Yeshiva Bochur, is just beginning to play as Number 22. (He picked that number because it's the gematria of his wife's name. Yes, they are that adorable, bli ayin hara, puh-puh-puh.)


The Dearly Beloved is the head coach of the Judean Rebels men's football team and the Ravens high school team. He is a good coach. He doesn't care about "winning at all costs." He cares that his players have fun, put their own families and the families in the stands first, and play fairly and with grace and sportsmanship.

"I don't want to hear any swearing. There are children and grandmothers in the stands. And I don't want to see dancing in the end zone, or hear trash talk. If you're losing, you don't have anything to trash talk about. If you're winning, let the scoreboard do your trash talking for you. When you make a touchdown, you calmly hand the ref the ball, because you just did your job. Let 'em know that you do this every day."

After coaching his guys this way for several years, I have seen that they take pride in leading the league in examples of sportsmanship. Recently, one of our Israeli players was being harassed by a member of an opposing team, who was trying to goad him into losing his temper. "Shhhh," said our player, pressing his finger to his lips, and with his other hand, pointing at the scoreboard. Situation diffused.

And here is perhaps what I love best about football in Israel: I love it because it is Israeli. It is predominantly Jewish, meaning imbued with Jewish values, to the extent that a gridiron battle can be. (The players are Jewish, both observant and secular, and from various other religious backgrounds as well. That fact doesn't seem to keep them from playing well together.) The league is beginning to crack down on swearing on the field and in the stands. It's not official. It's just that more and more players are having increased fun and decreased anger. Parents and even young people are reminding other young people in the stands that "we don't talk that way." And unlike fans in other countries, most of the chastised listen, and try to "clean it up." We have a lot to do still. But we're making progress.

The teams have taken it upon themselves to do charitable projects, to shine a positive light on American football. The Rebels have gone a few times to Nefesh B'Nefesh events, coordinating with them and with Ben Gurion airport personnel to unload and sort luggage for exhausted and bewildered new olim. 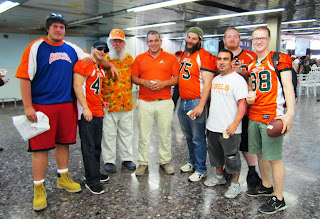 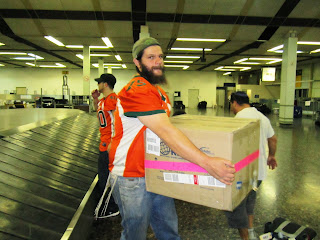 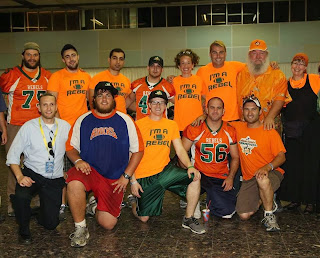 A few Tel Aviv Pioneers even show up occasionally to help out, thereby promoting brotherhood and camaraderie among the teams. (Coach Eastman: "Leave the rivalry on the field, where it belongs.")

And the Rebels recently were permitted the privilege of participating in a project taken on by the Jerusalem Lions, reported at the IFL site by Commissioner Betzalel Friedman. Warning: tissue alert. Though you may be laughing through the tears at how easily those big orange Rebels got knocked out of the way...

Pro- and semi-pro sports is getting a really bad name. From the fields to the stands, in countries all over the world, sport is getting to be a place NOT to bring your kids. Which is a real shame. We're trying to change that, one player, one team at a time.

So do me a favor. If you like what you've seen here, please help spread the word. Pass on this blog post to your friends who love football, but don't even know Israel has it, or to people who need to hear good things about our little country. Let's help Uriel Wang's moment of glory to go viral. It's good for football. And it will make Uriel and his mother smile. Refua shelaima, little man.

Glossary:
Midot (also midos) - good character traits
Mensch - someone who exhibits good midot
Bracha - blessing
Gematria - a Kabbalistic method of interpreting the Hebrew scriptures by computing the numerical value of words, based on those of their constituent letters
Bli ayin hara, puh-puh-puh - an expression little old Jewish ladies say to "ward off the evil eye" -- used by this little old Jewish lady to remind readers that I am not trying to incite their jealously when I write about good things in my life, but rather am giving them blessings for every happiness in theirs
Olim - immigrants to Israel
Refua shelaima - traditional Hebrew wish that one who is ill should have a complete recovery