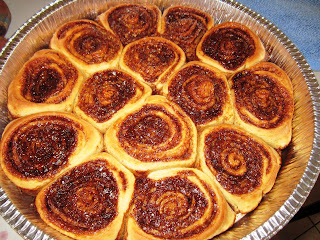 I used to make birthday cake, like nearly everybody else.  The boys would eat the frosting (often before it was served to the birthday boy), and my husband would politely consume a piece or two.  What he talked about with that misty-eyed look reserved for true nostalgia and a voice filled with wonder were his grandmother's cinnamon rolls.

Those cinnamon rolls were the stuff of legend.  Not only was there no cake on the planet that could hold a candle to Grandma's cinnamon rolls, but the tales abounded of how the Dearly Beloved learned speed and competitive treachery as he attempted to get to those cinnamon rolls before his stepfather ate the hearts out of every one, leaving only the less-interesting, drier outsides for "little Jimmy."  (Cruel?  Perhaps.  But great training in the art of being at the right place at the right time.)

Like all good wives, it became important to me to get Grandma's recipe.  There were a few obstacles to overcome.  Grandma had long since gone to bake cinnamon rolls in that great Kitchen in the Sky.  The Dearly Beloved, being a kitchen-challenged male, never asked for the recipe; and it seems his sisters hadn't, either.  His dear mama was also gone...

Patient research brought to light a great aunt who was ready to swap letters, photos of little Jimmy that he had never seen, and finally -- the holy recipe.  "I not only have the recipe for you," she wrote, "but in Thelma's own hand.  I'll find it, and send it along next time."  She did, and at last I held the four-by-six handwritten secrets to my husband's nirvana in my hand.  (I wish I had it to share with you now.)  "Thelma's Recipe for Julia's Buns" was the rather quaint title.  What followed only served to deepen the mystery.  In rounded pencil were the words:

That was it.  No measurements.  No temperature or time.  No clue, to a struggling baker wannabe.

I was not giving up.  I scoured cookbooks, and tested every recipe on my husband.  I honed and refined and combined recipes, seeking that look of near-euphoria, and the pronouncement:  "These taste just like Grandma's cinnamon rolls!"

Finally, finally, whether due to kindness or failing memory or fact, the Dearly Beloved said, "These are the best cinnamon rolls I've ever tasted!  Even better than Grandma's."

The problem is that they are little heart attack pills, cleverly disguised as food.  So meanie that I am, I told my dear one that he could have the cinnamon rolls once a year, on his birthday, because I want to see him at many, many birthdays.

But all that clever deceit taught to him at the knees of Stepfather Bob had not gone to waste.  My dear husband convinced each of his sons, one by one, that the boy didn't really like birthday cake.  The boy liked cinnamon rolls, didn't he?

So Abba could get away with cinnamon rolls once a month -- at least for the months of January, March, September, October, November and December.  Does the wiliness stop there?  Not at all.  It has become a family requirement that one of the first questions asked a prospective spouse is: "When is your birthday?"  The boys have cleverly added a couple more months to the cinnamon roll tradition.  (Abba is working on their math skills, to try to persuade them to offer him perfectly-timed grandchildren as well.  Thankfully, they seem to be ignoring him here, and simply going about their business.)

Thankfully, my husband did not continue the cycle of theft of his youth: no soft hearts are consumed without their full outer-jackets of crispy, thin dough.

Please enjoy the traditional birthday treat of Chez Mizrachi.  Remember: not healthy.  Once a year, only.  Unless you're very, very clever.

Add the liquid ingredients to the dry ingredients.  Mix well.  Knead dough until soft ball is formed, adding a tiny amount of flour, as needed.  Allow to rise until doubled in size.

Roll out into a large rectangle.  A better pastry is produced by rolling the dough out very thin.

Mix together the remaining butter of the melted 200 grams, a cup of dark brown sugar, and 3 tablespoons (or more) of ground cinnamon.  Spread it over the dough.  (Go ahead.  Get your hands into it.  Like a great peanut-butter sandwich, it's better if the filling extends right to the edges.)  Roll the dough into a log, pinching the seam to seal in the filling.  Cut into 1/2- to 1-inch slices, and place in two round pans that have been sprayed with Pam (or greased in any other conventional manner).  Cover with a kitchen towel that reminds you of your grandmother's kitchen.  Allow to rise until doubled. 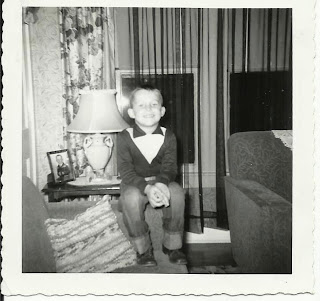 Bake in preheated oven set at 350 degrees F (175 degrees C) for 15 or 20 minutes.  You want the cinnamon rolls to be thinking about turning brown, but not quite there yet.  If you're feeling very decadent, you can spread or drizzle over the warm cinnamon rolls a frosting made of 1 teaspoon milk, 100 grams powdered sugar, 50 grams of melted butter, and a bit of vanilla extract, or etrog liqueur, if it's near Chanukah time, when etrog liqueur is traditionally ready.

Happy birthday, Best Friend!  May we share many more happy, healthy years (in spite of your consumption of Thelma's and Julia's Buns).  I have no idea what your grandmother would have thought of the final product.  But I like to think that she'd be happy I made her little Jimmy happy.

What a wonderful story! Happy Birthday to your Dearly Beloved.
I was just talking to my father a few days ago, and he mentioned that when going through his mother z"l's things, he found some of *her* mother's handwritten recipes, and they were, just like yours, just lists of ingredients, with no amounts or instructions to be found. (Boil? Bake? Both?) But my father found it funny that they also didn't have titles, so that he didn't even know what the results were supposed to be! I guess people were just smarter back then, and had no need for such luxuries :)

Yummy'!!! Too bad we do not have a milchik oven, these would not last an hour in our house. Happy Birthday and a freylikin Chanukah. May you keep bringing an ubandance of light into the darkness of Galus for many more happy and healthy years!!!

This is Josh. I added April and August.

Toby: Great story! Thank you for sharing. Yeah, they were lots smarter. Or they didn't think that future generations would want to taste their deliciousness. :-)

Sheyna Ariel: Definitely worth buying a countertop milchik oven. Thank you for you beautiful brachot!

Hashke: Indeed you did, my friend. Now get them back to my kitchen, so you can all have cinnamon rolls for your birthdays. :-)

Ruti I laughed by this. Multiple times.
Such a warm raw beautiful inclusive story.