"You make us strong."

Yom shlishi, 26 Sivan 5770.
They are young and beautiful children.  They are out on the streets at night, in some pretty lousy neighborhoods.  Some of them don't have homes to go to after hours.

Happily, they are not "lost children" or "off the derech kids."

They are the young men and women in uniform, who watch our highways, putting themselves in constant danger so that we can travel and live and sleep safely.

Of course, many of them are from families that have lived in Israel for generations.  ("I'm from Haifa; but my grandfather came from Syria."  "My family is here already seven generations, from Morocco.")

But many of them are olim, just like we are.  They are from Canada and Ukraine and Kazakhstan.  Some of them are here without their families -- and perhaps Standing Together is even more important to them.

According to its mission statement, Standing Together is a non-profit organization dedicated to supporting Israeli soldiers on active duty, and is funded totally by donations from concerned Jews throughout the world. It is a voluntary organization with no offices, almost no employees and no expense accounts.

The Dearly Beloved and I had the privilege of joining a small band of volunteers, lead by the founder of Standing Together, David Landau.  When we should have been heading off to sleep (and when many of the soldiers' contemporaries might just be starting up the night's entertainment), we drove out to some of the area machsomim (checkpoints) to visit our heroes. 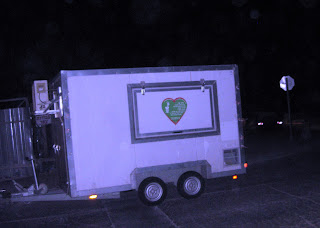 We gave them ice cream and Elite candy bars from David's special refrigerator truck.  (In the winter, he and his volunteers make warm pizza and hot coffee available, among other delights.)  They gave us back the most beautiful smiles. 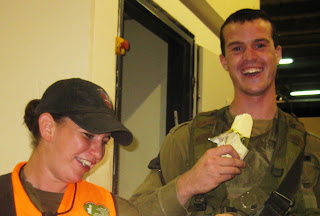 I have had the pleasure of going out on a couple of these missions since we have been in Israel.  Each time, my heart is moved by the beauty of these kids, their sweetness, their devotion, and their gratitude.  Every time we would thank them, they would thank us ten times more.  "You make us strong," one soldier said.

It's enough to make a mama weep.

If you live here, give yourself the treat of spending a few minutes with a holy Israeli soldier.  As you expect, you will go with the intention of strengthening the soldiers.  As you also know, you will walk away strengthened by them.  This is especially good therapy if you worry that you're not doing enough, or if you're a little depressed, and want someone to lift your spirits.

If you still live abroad, think about arranging a mission with David and Standing Together when you are in Israel.  Nothing makes you feel more like part of the Jewish story than being permitted to participate, rather than just being a tourist.
Posted by rutimizrachi at 16:24

You are quite the social butterfly! :-)

May Hashem protect them - and their beautiful smiles - as they protect us. Next time I'm Home, you're going to take me on a Standing Together mission, Ruti. 'k? Meantime, I'm with you and them in spirit.

I am not sure why we have the standing army watching the roads in the interior of the country? Isn't there a state highway patrol in Israel? Are the police in Israel that impotent? Something is wrong with this picture.

Hashem should protect all our brothers and sisters in uniform.

Wow, Israel sure does become you!! Thanks for the beautiful smiles and thoughts. They surely are amazing people!! B'vracha, Sandra

If you're not in Israel, in addition to counting down till your next Standing Together trip, you can also donate goods or gelt.

Wonderful post. I'm sure you enjoyed your Shabbat guests.