Geula on My Mind 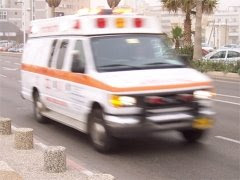 A friend sent me the following remarkable letter.

There are no words for the gratitude and awe Bracha Elisheva and I feel for your incredible tefilla and zrizus for mitzvahs.

When this all began, I wanted to know what the spiritual implications of the disease are.  As it turns out, Rav Avraham Schorr writes in the Lekach Levav that Cancer's nature is for cells to grow seemingly without reason, to the point that they kill the cells around them.  He says that this is the essence of Sinas Hinam, baseless hatred.  When people do not maintain an Ayin Tov, a good eye, for one another, they end up hating each other for no reason.

It seems fitting, then, that the tikkun for this insanity is Ahavas Hinam, love without reason.

Anyone who has observed the tremendous love between friends and community across the globe will see that this tikkun is taking place as we speak.  From where I sit, the experience is indescribable, and feels at times as if we're living the lives of two other people--not ourselves.

In any event, please know that your love and support is well needed and welcome in our home, as are you.

Cancer is a terrifying disease.  Is it just my impression, or have you also noticed that it seems to be growing like – well – like a cancer???

I am moved and shaken by what Jordan shares with us, in his quote from Rav Schorr.

Many years ago, I had a chavruta.  She came to my door, the guest of a guest.  She sported a black leather mini-skirt and shockingly red, very short hair.  Only much later did I learn that her costume was part of her campaign of shaking her fist at the Malach haMavet (the Angel of Death).  She had been fighting cancer for 18 years; and up until now, it looked like she just might win.

We began to learn together, because she struck me as very intelligent, and I answered her questions without glossing over anything I didn’t understand.  Over the year we learned together, she made me prove that I really believed everything I said I believed.  It was an education and a pleasure to watch her grow in her respect for the concepts in the Torah.

As Marla got sicker and sicker, the community around her said Tehillim on her behalf.  Her favorite perek was 51, which spoke about the kind of repentance she hoped to attain before she left the world.

In her last battle, she taught me more about love and giving from a Torah perspective than I had yet learned from texts or even from my beloved rabbis.

Right now, I have a friend who is fighting cancer.

I have only been privileged to meet her in person once; but through her writing, I have come to know and to respect her.  She writes a blog sharing what it is like for a young mother, living in Israel, to fight this terrible disease day to day.  She calls it “Coffee and Chemo,” in honor of the friends who come to sit with her during her chemotherapy, to take her mind off of the rigors of the experience.  RivkA (with a capital A at the end of her name) ends each of her blog posts with the words “Please daven (or send happy, healing thoughts) for RivkA bat Teirtzel.”  It feels like a great honor to be among the many readers who have added RivkA to their prayers.  May we share great news!

Often I hear from well-meaning individuals their concern that the sufferer of the disease is somehow to “blame” for the disease.  But I have empirical evidence that this is not the case.  Rather, this is a malady that we collectively must suffer, perhaps as a message that we must get our collective act together.  I believe that the victim is merely “carrying the ball for the team.”  Two years ago, a dear friend died of a particularly virulent form of cancer.  “Tante Dina,” as we all called her, was a very special neshama.  She gave joy to countless children, even though she was never blessed with children of her own.  She added music and dance to the world.  She was always there – more often than not anonymously – to help those in need.  Most characteristic of all, she refused to ever hear a breath of lashon hara about any person.  Tante Dina was the last person on Earth to be punished for the individual commission of the sin of baseless hatred.

We all have examples of people we know who are suffering from this dreaded disease.  The question, as the Israelis say, is “Ma la’asot?”  What is one to do?

Rabbi Nathan Lopes Cardozo offers an insight in his book For the Love of Israel and the Jewish People: Essays and Studies on Israel, Jews and Judaism.  In his chapter entitled “Jewish Tradition and the Intifada,” Rabbi Cardozo suggests the following:

"Israel should start a national campaign to promote the commandments between human beings.  National outreach programs that use radio and television broadcasts, websites, email, CDs and educational videos could reach hundreds of thousands of people.  We should flood Israeli society and the Jewish world at large with uplifting literature, presented in an attractive way in order to inspire people to show the highest sensitivity to the feelings of our fellow human beings.  Advertisements on billboards at bus and train stations and in shopping centers sponsored by major industries, should call on readers to be more patient with each other, greet passerby with a smile, show courtesy, help wherever possible and make it a matter of honor and pride to be a real mensh."

Any grassroots project has to start small.  But if something as small as the smiley face of the 1970s could make a big impact, surely acts of kindness within Jewish society could start small, and snowball into an avalanche of decency.  My husband always says to our sons – all very different individuals – that “world peace begins at the Eastman table.”  Each family, each individual, can make being nice to our fellow Jews a personal campaign.  If we truly want the Geula, the Great and Final Redemption, isn’t treating each person well just as important as the other mitzvot G-d asks of us?  If you knew that being patient with the person on line ahead of you had the potential to kill two million cancer cells, would it be worth it?  If you knew that treating a harried bureaucrat with compassion would save the life of a Jew, would you give it a try?

Rabbi Cardozo quotes the Talmud (Yoma 9a, b) to drive home the point.

There are women's groups springing up all over Israel whose focus is to increase Ahavat Yisrael collectively.  May their efforts be crowned with success.  May we help to bring about a refua shelaima m’heira for Bracha Elisheva bat Kayla and RivkA bat Teirtzel, among all of our precious, holy cholim.

Ruti - you hit it smack on the head. Thank you so much for the gentle reminder of what is really important, and thank you for caring for my friend so much!

Super blog Ruti. I hope you don't mind, but I appropriated the 'Lo Lashon HaRa' image for my own blog and linked it to yours.

I always get so much from your blogs. I feel like you put yourself out and gave us all what we needed to hear with this one. Illness has a way of making us feel so powerless and vitimized. These ideas show us what are part is and what we can do about it. Thank you. A sincere Refua Shelaima to RivkA. We'll be davening for her. All the Best, Rivka Malka

Thank you, Ruth, for being nice, for being honest. May we see a refuah shlayma for your dear friends and all the cholei yisroel.

Schtark: It's a good thing to share, my friend. Thanks for the link.

Rivka Malka: Amen! Your remarks give me strength, for reasons you know.

Bracha: Amen! You help to keep me straight, dear lady.