A Thank You, To Elie's Mom. 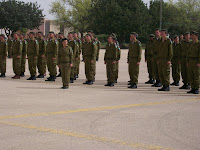 [This post is a response to A Soldier's Mother: Ima, I'm in the Middle of Nowhere. http://israelisoldiersmother.blogspot.com/2008/08/ima-im-in-middle-of-nowhere.html]

Thank you so much for at least two things. As a former soldier, I so appreciate the decent way you speak about the goals and training of the army, and its goal to "build the man." At the end of the day, they are, of course, invested in building a piece of the whole, the "equipment" made of men who can work as one machine when that is needed, and as separate units, when that is needed. It doesn't always feel that way to the raw recruit, as the layers of his civilian self are (temporarily) stripped away. But like the great scene from the movie "Karate Kid," once he survives "wax on/wax off" enough times, he sees the value of that seemingly pointless training. When it counts. When he sees himself functioning as a real soldier in the field. When it saves his life, or someone else's.

As the mother of a soldier, I am grateful to you, who are farther down the path than I. Thank you for shining a light, so that I can see my way, and the way of my dear son. Your coherent and calm words take away a lot of the worry and fear normal for the mother of any soldier in Israel. And thank you for declaring publicly what I have seen for myself. The IDF bends over backward for her soldiers more than I ever remember being done for the US soldier. Many times my dear son, newly-married, has had privileges allowed him for the sake of his marriage, that the US Army would never have allowed a fellow in Basic Training. (I can just hear the Yewnited States Army now, in the booming voice of Master Sergeant Flood: "Son, if the Army woulda wanted yew to have a wahf, we-wudda-issued-yew-one!") I am proud of my time, serving the Old Country. But I am glad we made it here, in time for my dear sons to decide how they wanted to serve this one. Like the rest of this amazing country -- with all her faults -- the IDF is very family-oriented. Something nearly unheard-of, at this level certainly, anywhere else in the world.

I just want you to know how much I appreciate you, and Elie, and all of our children, who decide that it is holy to protect this Land and this People.

Warmest regards, and Hashem's protection for all of them,

P.S. American Jew, come home. G-d forbid you or your son should fight in any war. But I would rather my boys put on a uniform here, and learned to fight to protect Our Home, than to see them go off to "do their duty" to fight for something more obscure.
Posted by rutimizrachi at 13:13