All for the Gush Katif Brides: Elul Ushered in by Rabbanit Yemima Mizrahi

I have listened to and read Rabbanit Yemima Mizrahi for many years, but last night at the Great Synagogue was my first opportunity to see and hear her in person. The occasion: to raise money for the still-struggling but happily still marrying brides of the former communities of Gush Katif.

The event was a veritable Who's Who of fascinating, inspiring, hard-working women, all gathered together to raise funds for Gush Katif brides. Let me drop just a few names: Anita Tucker, outspoken spokeswoman for the destroyed communities of Gush Katif. Sharon Katz, founder of the Raise Your Spirits acting troupe and producer of the Dames of the Dance collection of amazing dancers (and many more holy projects than I have time now to post!). Fayge Bedell, whom I only know as Sharon's comedic foil onstage for the aforementioned fund-raising projects. Rivkah Lambert Adler, fellow blogger, founder of the twice-yearly Book Swap in Ma'ale Adummim, and one of the driving forces back in the day behind Baltimore aliya to Israel. And many more amazing ladies, many of whose work on behalf of others is only done in secret...

To watch Rabbanit Yemima Mizrahi speaking is to witness a human being making herself into a living shofar. She uses the techniques of the singer, the dancer, the stand-up comic, the mime, the painter, her body and arms and hands the brushes to color our hearts and minds with prayer, to educate us with her prodigious Torah knowledge with humor and sensitivity. Rabbanit Yemima embodies for me David HaMelech's remark: "I am prayer."

My foremost thought when I listen to Rabbanit Yemima is how much she makes me care, makes me empathize with the plight of my sisters: those struggling to find a parnassa; those who have not yet found a life partner; those who want children but have not yet or cannot have them; those who have both, but live in the special hell of broken dreams. I have yet to hear or read anything by this special teacher without being reminded of them -- not due to some heavy-handed lecture on her part; rather, due to the heart-plucking way her voice speaks to them, reassures them, pleads with God on their behalf. How can the heart not cry out with her for them? And in humble gratitude, if we are in the position to only empathize, rather than sympathize. Thank you, dear God, for what you have given me. Let me never, ever take it for granted. Let me not turn my blessings into complaints. How dare I, when my sister or brother is not so blessed?

The talk was focused, of course, on preparing ourselves this Elul for a meaningful Rosh Hashana and Yom Kippur. Can we drop our hurt feelings over some real-or-imagined slight? Can we stop saying "לא" (no) and replace it with "לו" (for him [or her, or Him, or anyone else besides ourselves])? Note that these two words together spell "אלול" -- the holy combination of letters for the month of Elul. Can we practice the many voices of prayer -- the shhhhhhhh, of silent, introspective, shutting-down-our-anger prayer; the kretz of a sigh that sends "to death" all of the negative things we want to empty from ourselves; the power of making our entire bodies into shofrot (ram's horns) to blast our prayers to the heavens...

Rabbanit Yemima told many stories, as she always does. One especially resonated for me. And of course, it made me cry.

The story was an illustration of the concept of "I'm sorry." With her trademark humor, Rabbanit Yemima reminded us that we Ashkenazim don't really get slichot, the penitential prayers said before and on the High Holy Days. Ashkenazim recite the slichot with varying intensity between ten days and a week prior to Rosh Hashana, before the morning prayers. That means getting up a bit earlier, and I don't envy my husband and sons this task. The Sephardim (I'm sure with the same struggles toward intensity) are asked by their tradition to get up to say these special prayers at midnight for a full month before Rosh Hashana. (This is the only thing on the "con" side of The Dearly Beloved's pro/con scale for why he does not want to switch to the Sephardi way of life.) Finally, the story, with another traditional (and heart-rending) Rabbanit Yemima device: she tells the story on herself.

I won't try to quote her full, beautiful telling of the tale. One of her special talmidot (students) was dying "of the terrible disease," and asked her to please visit. But -- to quote her painful words, spoken airily, but with excruciating pathos: "I am very important, and I am very busy..." It took the rabbanit a very long time to make the time -- but finally she did. The talmida said to her, "You didn't come for me. You came for you." And Yemima shares with us that she understood that she was only coming to the talmida finally, finally, so she could say that she checked the mitzva off her list, she had "visited the sick." And she could think well of herself... Oy! I choke now as I type the words! Which of us has not felt this? That we waited too long to do that special mitzva, but "knocked it out" finally so we could make a check-mark on our "Good Jew" list... The story ends with the sweetness that the girl became her special mitzva until she was sure that she was forgiven. In the phrase chozer b'teshuva -- one who returns to the practice of mitzvot -- the word "return" is the key. We can't just do it once. We can't just say "I love you" once, and have a marriage work. We can't just say "I'm sorry" once, and expect to be taken seriously.

There were more stories, more lessons, more patented RYM jokes. As this lecture was videotaped, I hope I can share it with you at some future date.

And when you are looking for that special mitzva, that special tzedaka, for the days of the holy month of Elul (or anytime!), consider learning with the ladies of L'ayla, under the auspices of the OU Center in Jerusalem and led by the extraordinary Rivki Segal (formerly of Baltimore, of course). And if Gush Katif still hurts your heart as it does mine, even a decade later, consider helping the children of the expellees as they marry and try to build batei ne'eman biYisrael -- donate directly or sponsor wedding gifts or sponsor community shabbat kalla events in your own homes.

Click on the photo of the document below to embiggen it, and to get the information you need.


You can make a difference in the lives of people still suffering a decade after the worst crime a Jewish government perpetrated against its own citizens. And contact the devoted ladies below if you would like to sponsor a bridal shower in your community.

You can do this in any country in the world, or in any community in Israel! But if you're planning a party in Neve Daniel, check first with brand-new olot (immigrants) Shayna Levine-Hefetz and Eva Lynn Goldstein-Meola, who are planning a bridal shower here, as one of their many early Israel-based mitzvot. #OlimFromBaltimore

Let's pool the spiritual power of Jewish women to make this the last year without the Holy Temple. Oh -- and if you are not Jewish, nor a woman, but you want to help, you can also add to the wonder and beauty of the world and of this project. But you knew that... In the merit of this mitzva, may anyone you know and love who needs to find a match, who is praying for a child, whose life is far from blessed, hear good news. 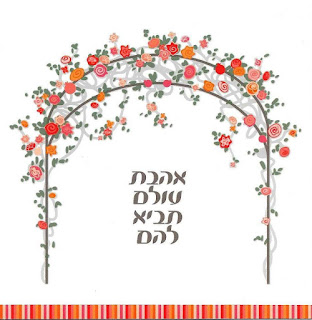