And then there are days like today, filled with blessing.

We're in the Old City, on our way to the Kotel. Waiting for our son and grandchildren to catch up, we plan to sit for a moment in the shade, trying to read the minds of the Hareidi parents and four sons surrounding the bench. Are they just arriving? Just leaving? We don't want to take a space they had staked out for themselves.

"Are you just arriving? We don't want to take your seats," I say in Hebrew. The young besheiteled woman answers in English. "No, we're just going." And then she puts on mock hostility. "And if we weren't already, we are now!"

We all laugh and banter some more, asking where all of us are from. We're from Neve Daniel; they're from Ramot. Before? We admit to being most recently from Baltimore.

"She's a recovering Bostonian," says her husband, no doubt quite warm in his long coat and felt hat. "It's like an addiction. It's taking a while for her to get over it." I ask where he's from. "London, and then Amsterdam."

"Ah, well, that is even a worse addiction," I tease. "How is your recovery going? And with a mixed marriage and all..."

"Slowly, slowly. It's a lot of work, but they say marriage is a great testing ground."

I tell them Rav Ezriel Tauber's explanation of marriage, about God taking two lumps of coal and rubbing them together with a lot of friction to create two diamonds.

More banter, and we part with brachot for each other's happiness and health.

And I think: what a wonderful lesson they just gave their four sons, who watched this obviously cheerful banter and blessing pass between their very frum parents and these very different Jews.

Whatever inspired the Boston-London-Amsterdam merger, may they live long and well, and encourage generations to lead with ahavat Yisrael.

As we were walking back up Yafo, trying to get our over-warm but well-fed and watered grandchildren back to the bus for home, I sent the family ahead, and stopped into the shop of my old friend Menashe to see if he could repair my excellent bag that has served me well all over Israel. 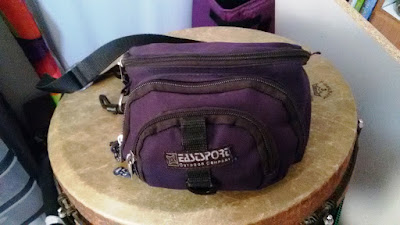 No purse works as well as this inelegant little pack. But the top zipper had finally developed a rip. Small wonder: I stuff the world into this pack. I figured if the price was right, I'd just dump my possessions into a plastic bag and leave my pack for repair to pick up later in the week. Menashe examined it carefully. Then, he jumped up, insisting that I follow him. We crossed the street and entered a shop with an assortment of Iranians working behind the counter: a fellow in his sixties behind the sewing machine; next to him, a woman who looked suspiciously like Menashe (and turned out to be his sister); a very elderly "grand dame" sitting behind her cane, her red hair covered with a fine flowered shawl. Near her was another slightly younger woman. All of them, Menashe's family, by blood or by marriage.

In rapid-fire Farsi, Menashe explained what needed to be done, hugged and chatted with a friend at the door, and bade me farewell. In minutes and for ten shekels, my pack was repaired. "Thank you so very much, a thousand times thanks, Sir, and blessings to you and your family!" I said. It sounds better in Hebrew. He smiled, I think pleased that stopping his previous task abruptly hadn't been taken for granted. But business with Iranians is never quite done...

"I have a lovely blouse, just perfect for you," said Menashe's sister. "Ah, lovely. How much is it?" I was a little concerned, in case I would have to decline. "For you -- fifty shekels." Joyful that it was within my means, I accepted the blouse as if it had just been designed for me on the spot. We made the transaction, following which she mentioned that she had the perfect skirt...

"No, thank you. This is all that I can manage today -- but it is quite lovely."

I thanked them again, and the man behind the sewing machine insisted that if I would ever need work done in the future, I would come to him. Of course! Are you kidding? I'm practically a family friend now.

I only found out how fine my blouse was when I got it home and took it out of the package. Cut like what I was wearing today, but of such a soft fabric, with a very nice pattern... It really did feel as if my wily saleslady knew her customer well.

The kids survived the heat and allowed us to get photos of them at the Kotel as presents for their mother and the grandparents in the Old Country. And I had some experiences that reminded me of the subtle joys of living in an incredibly diverse family, in a small country, where getting along matters so very much.

I wonder if the little threads of kindnesses today will help to repair the spiritual fabric in time to bring better days? May it be so.
Posted by rutimizrachi at 19:39