Yom shlishi, 2 Adar 5773.
Donating blood was not part of my upbringing.  I don't know why.  And had the idea come into my brain, it would have been dispelled quickly by my disproportionate fear of needles.

That fear was cured in half an hour, as I awaited my turn with other female US Army recruits for the shot in the arm.  I had time consider as the line shifted forward.  "Don't move," we were warned by the army nurse, "or this gun will make six nice little 'Zorro' tattoos in your lovely young arms."  It was a very scary looking piece of equipment, designed to shoot six shots of pressurized air-propelled serum into the arm, thereby inoculating us efficiently without needles.  The fact that I was a little older than the other girls, having enlisted at 24, stiffened my resolve to not let these babies see my cry -- or even flinch.  Thus ended my fear of vaccinations.

By the time I got out of the army, I appreciated the mitzvah of giving blood, especially since I was from the "universal donor" blood type group.  Naturally, I wanted to do my part -- only to be told that the United States Red Cross didn't want my blood:  I had been stationed in Germany during years that concerned them.  Mad Cow Disease, or something like that.  I was really disappointed.

So imagine my surprise when I came to Israel, and tried again to donate blood.  "Were you ever in England, Ireland or Portugal?" the young Magen David Adom nurse asked me.  No, I hadn't managed to make time to travel that extensively.  No mention of Germany.  I was in!  For the first time in my life. 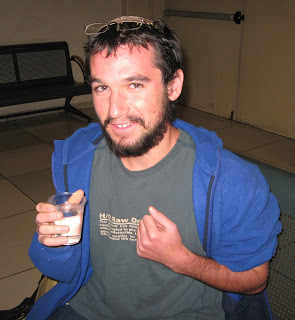 It is interesting to see who shows up to donate blood at the MDA station on the top floor of the Central Bus Station.  Young mechina guys.   A lot of soldiers, both male and female.  Young mothers.  Middle-aged people like me.

Not everyone wanted his or her picture taken -- but everyone asked me to please write about giving blood, to let people know that it's easy, doesn't take much time, and makes a difference. 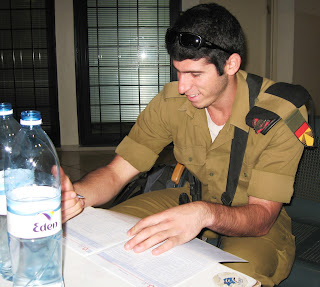 As the mother of three IDF soldiers (and one about to be drafted), I want so much to do my part.  They should never need a drop of their mother's blood, please G-d.  But we are all a family here.  That mother's son is my nephew, as is that soldier standing and waiting his turn to donate.   I can't offer to give my new country what they are willing to give.

But if any of them ever needs this kind of help, I want to be there for him.

For those of us in Israel, the process is simple.  If you are in the Central Bus Station in Jerusalem, for instance, and have forty minutes to spare, go to the top floor (the floor above the bus platforms).  I am pretty sure the Maden David Adom workers are there every day.  They guide you through the process, gently and lovingly.  They're good at what they do.  (No Zorro marks; very little discomfort.)  They'll give you juice or water, and pamper you for a half-hour, to be sure you're not too light-headed to go about your business, before they let you go. 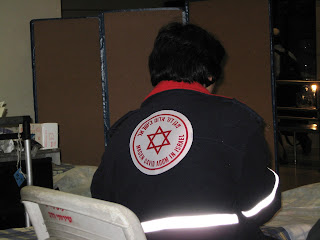 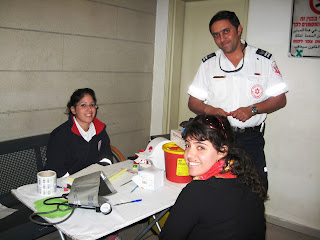 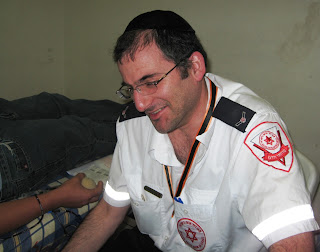 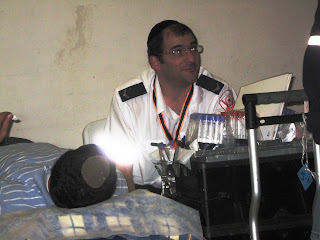 This post was "in the works" for some time.  It was finally dusted off and completed today, thanks to a video my friend and fellow writer Varda Epstein sent to me on Facebook.  Take a few moments to listen to a grateful young man whose life was saved by 70 people!

And of course, signing up with Gift of Life for bone marrow donation.

No one wants my A rhesus negative blood because I'm English. There's no telling the transfusion service that I was vegetarian through the mad cow scandal. They just don't get it. Sigh.