Shabbat on a Budget 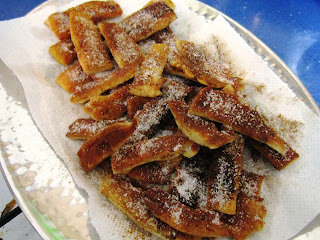 Some of my favorite Shabbat meals have resulted from the following logical premise:  "We had a helluva great party last month [Ed. note: See a future blog post for wedding details]; so we had better tighten our belts, or we're going to still have month at the end of the money."

There were a lot of quality leftovers after the wedding, two sheva brachot, and a Shabbat here and there.  I have enough Scot in me to abhor waste -- so the food had to be used -- but Shabbat also must be given the honor it is due.

I had been stashing in the freezer leftovers of really nice Shabbat pot roasts, because the leftovers from the Number 8 (chuck) roast slow-cooked in olive oil, wine and spices is not the sort of thing one throws out or even eats during the week.  The same could be said of the leftover homemade shwarma of pargiot (boneless chicken thighs).  Neither of these dishes could be served again in their original forms.  Cooking them again could dry them out, and would surely cause the meat to shred.

So I decided to make a meat pie and a chicken pie for my expanding/contracting/expanding guest list. 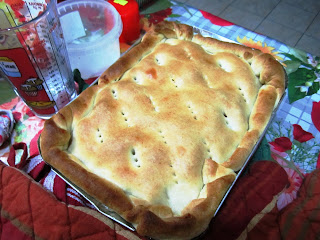 The first step was to sauté onions and garlic in olive oil.  While the onions were browning, I cubed potatoes and carrots, and boiled them gently until they were just cooked.  Next, I separated the onions into two pans.  Into one, I added shredded leftover beef roast (which was already flavored with salt, pepper, thyme and baharat) and into the other, shredded chicken (already spiced with curry powder and garam masala).  While these mixtures were heating, I lined a couple of aluminum pans (56mm x 190mm x 260 mm) with prepared pastry dough that comes in rolls, and which I cut to size.  I pierced the bottoms and sides of the pastry shells with a fork. 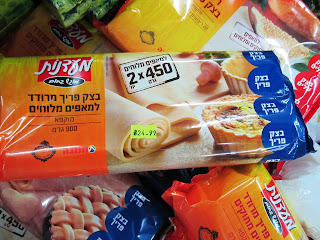 I filled the lined pastry shells with the meat mixtures, and then covered them with rectangles of dough, crimping and and sealing the edges, and decorating the tops with fork tracks.  I baked the meat pies at 177 degrees Centigrade (around 350 degrees Fahrenheit), until they were golden brown on top.

So far, I'd spent 25 shekels over what was already in the house (about 7 bucks). 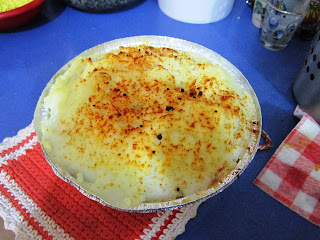 I had a little of the meat mixture left over; so I made a small two-person shepherd's pie for the newlyweds.  I wanted a little bottom crust; so I used a leftover flour tortilla, warmed slightly in a frying pan so that it would be soft enough to shape into the bottom of a round pan.  I added the meat and onion mixture, and put some freshly-made mashed potatoes on top.  A little paprika added color to the top, lightly sprayed with Pam Olive Oil spray.  Again, I baked this dish at 177 degrees until it was heated through. 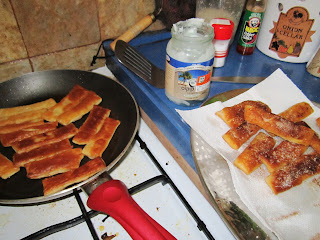 There were leftover strips of pastry dough.  I decided to make a quick dessert of fried dough.  I melted coconut oil in a frying pan, fried the dough strips on both sides until golden brown, and then sprinkled them with sugar and cinnamon.  Nope, not even a tiny bit healthy.  But tasty, and quite a hit.

And of course, I balanced all of this non-health-food with lots of fresh, green and red and orange and yellow salad.  Also not expensive... and a great way to buy off my conscience for feeding them food they loved, that wasn't particularly healthy. 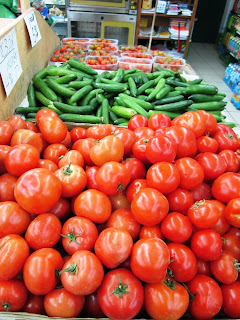 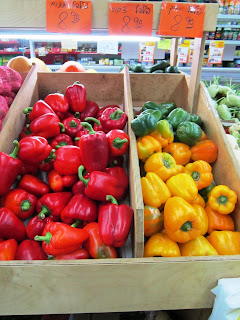 There are times to pull out all the stops to put together a real feast, knowing that Hashem will always reimburse us for the money we spend on Shabbat and the chagim (holidays).

And there are other times when He seems to say, "I'm not sending any extra money just now.  Be creative.  Don't worry.  I made you.  I know you've got it in you."

What a lovely blog! I, too believe in harmony and in the beauty of a good chicken soup. I will check in regularly.

I love this kind of cooking! Thanks for sharing your techniques.

You gave me an idea for what to do with our leftover brisket from Shabbat. I make pot pie from leftover turkey all the time, perhaps because I'm used to having leftover turkey, but there's no reason why I can't make brisket pot pie, is there? Want to send along the recipe that you used?

Danale: Thank you for popping by, and for the inspiration in YOUR lovely blog!

Mom in Israel: Glad you enjoyed. Just like Mother used to make, right? ;-)

Elka: Still basking in the glow of your faces and your children's faces at the wedding. What a wonderful surprise!

Karen: Glad I could help! However, I really didn't use a recipe. I'm not very good at measuring. I think you could adapt any meat pot pie recipe you found online, though. B'hatzlacha!

Sometimes my husband asks me what's for lunch and I say, "Creatio ex nihilo."

This is also a good way to start emptying out the freezer before Pesach comes around. Multi-tasking at its best!

Really interesting things. Recession has hit manchester too. but its the comfort food thing thats so appealing..

Also.. those beautigul green vegetables . I have pictures on mphone of Carmel Marketsfood stalls, which i looked at for ages to cheer me up.
Shabbat shalom for tomorrow.