For Mishpachat Mizrachi, one of the great benefits of moving to Israel has been the ability to live a Jewish life and to live in a small town.

That means most people know us, and are to one degree or another personally invested in our success and happiness.

It means that we know what's up with each other's kids, and can help each other to raise them.  "It takes a village" only works when people in that village know each other.  Small towns allow for that familiarity, more than do big cities.

It also means small-town service, where we can walk to the library and the post office, to the bakery and the hardware store and the local market, and where the people who run these places care about giving us the best service possible.  Not just because they want to beat their competitors -- but because they are able to form a relationship with us, to learn what we like, and to try their best to provide it.

Gilo resident Moshe Torjman returned to Israel 30 years ago with his Chicago-born bride.  He brought with him from America a wonderful command of the English language, and a knowledge of some of the products and service concepts that matter to American olim.  He and his brother Avi have had other successful stores, in  Kiryat Yovel for three years, and in Bayit Vegan for twenty-one years.  Now they have decided to put all of their effort into the makolet in Neve Daniel.

We were apprehensive about the change in store ownership.  We were used to the makolet the way it was.  It was the nicest small-town market we had seen in our travels around Israel.  And we loved Shulamit.  How would we manage with change?

As it happens -- though how could we not still miss our dear Shulamit? -- the store is even better than before.  The service is excellent, as Moshe and Avi and their long-time employee Sasha, as well as the familiar face of Yoram, work very hard at keepin' the customer satisfied. 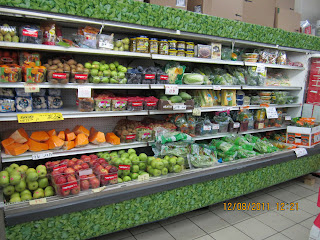 They have enlarged the produce department, and have added a meat counter.  The store is always adapting and growing within its confines.  New displays are always popping up, giving a feeling of order and abundance, with an almost American feel.  Ask for a product, and they will do their very best to acquire it.  (And if there is something you don't care for -- such as the short-lived cigarette display -- the Torjmans are equally prepared to be responsive to comments.) 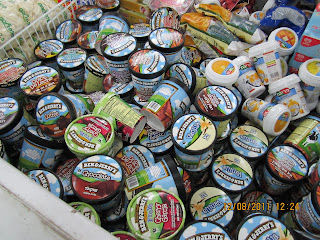 They are trying very hard to keep their prices competitive, not an easy task when the competition is against big markets just a few kilometers down the road. 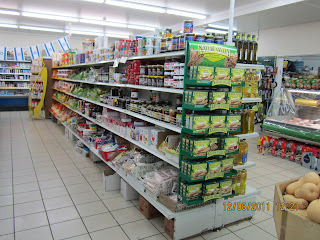 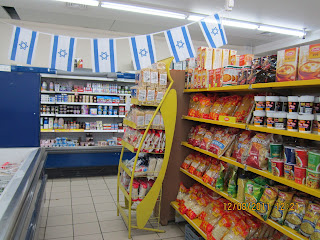 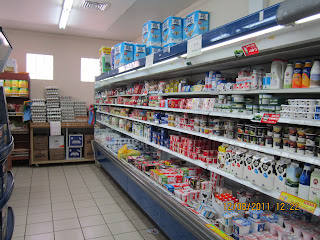 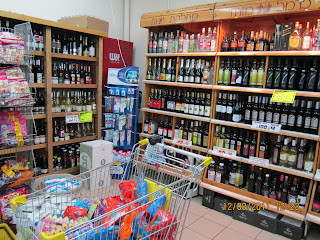 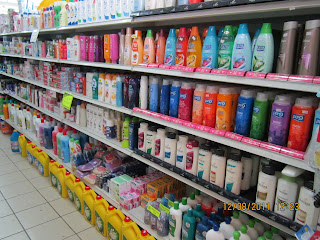 "We have good people who are anxious to serve the residents of Neve Daniel," Moshe says.  Implicit in that statement is that those good people and that good service can only remain in Neve Daniel if we support it.  If we just come in once in a while to buy a carton of milk, the store will not survive.

So this is a personal plea to my automobile-endowed neighbors.  I certainly don't mind you helping to support that other worthy gentleman in his huge store down the road.  But think about breaking up your shopping and doing a third or a half of it locally.  The Dearly Beloved and I are among your neighbors who will probably never have a car; so we do almost a hundred per cent of our shopping at our local "mom-and-pop" store.  As much as I know you would be willing to do the mitzvah of shlepping me to the store once or twice a week -- it would mean so much more to me if you could help to maintain my local makolet, just a short walk and lots of independence and warm, friendly service from my door.

"Sometimes you want to go
Where everybody knows your name,
And they're always glad you came..."
-- from the "Cheers" theme, by Judy Hart Angelo and Gary Portnoy
Posted by rutimizrachi at 09:38

Moshe calls you Rabanit? That's worth every extra shekel you pay above Rami Levi's prices :-)

That's not a makolet -- once it has a meat counter, it's a 'super.' :) I agree with your point. It's also a much easier way to shop -- every month or two I go to the nice man who wants to give us all cheap cellphones and stock up on paper goods, canned goods, sodas and juices -- all the heavy stuff. You can even let them deliver it and not feel TOO guilty. Then in between I go to the local place for meat, fruits and vegetables, bread, dairy products, etc. I spend at least half of my money locally, I get MUCH better product, and my weekly or semi-weekly shopping trips are a breeze.

If you ever do want a lift down the road let me know. It would be nice to have company. Not on Thursday night or Friday, though. I would rather pluck my nose hair without anesthesia.

From your friend who's lucky to be your neighbor,

The place looks so bright and clean! It doesn't look like a local makolet - it looks like a well run supermarket. Good luck to the new owners!

Karen,
How 'bout I provide anesthesia on Thursday night or Friday and we forgo the plucking of said hirsute nasal passages?

I sooooo miss this kind of shop, in a world of Mega Hypa Super dooper (questionable) barns that are known as Supermarkets.
I want to move to Neve Daniel on the basis that YOU are there and that there is a nice friendly shopkeeper to help (but would they cope with my Yorkshire accent?)

Ruti, that's some fancy supermarket you have. We also have a lovely mini-supermarket in Shiloh, but it doesn't have fresh meat and veggies. We have two green grocers in Shiloh.

I agree that it's important to shop locally and, as long as the store is a good one, it pays in the long run.

Ruti: this is a good one. I'd like to put in a plug for people who don't think they need a constant supply of "whatever" from chutz l'aretz. Talk about going out of town.
Rafua

I'm with you Ruti, love that small town life and glad you have it. I miss it here in Baltimore, as it has grown sooo much. way too big for my neshama.
And hatzlacha with the new grocery store. And many blessings to you and your family.
Hinda

Rabanit Bat Aliyah: Well, actually it's Sasha that calls me Rabanit; but you are right -- it's worth an extra shekel or two to be treated so warmly. :-)

Karen E: I think you're right -- it is more a super than a makolet. Thanks for your kind offer. The graphic description at the end still has me icing my nose...

WBM: It is nice and clean. Thank you for the good wishes!

QuietusLeo: You crack me up. If there is a needle involved with the anesthesia, my nose STILL hurts.

Sparrow: Thank you for your kind words, dear lady. Actually, your lovely Yorkshire accent would simply add to the harmony of South African/Australian/Canadian/American/South American/French/German/Israeli/... well, you get the idea.

Batya: Thanks for amplifying the point. Hope you get those nice additions to your makolet soon!

Hinda Bayla: Many blessings to you as well, dear friend. May your neshama find the small and cozy places that it lights up best.

The other point that the local Makolet in Neve Daniel and Shiloh have is that they are providing a parnassah - means for living- to fellow Jews who like us are also trying to fulfill the mitzvah of Living in the Land of Israel.

Too often one sees that saving a few pennies, excuse me; agurot is more important then proving a living to fellow Jews.

The big store down the road is a great tool to provide wages to thems guys that want us in the sea. See.

Hillel: Right on, Bro. I love when my readers make my unspoken points for me. ;-)

Beautiful! Makes me want to shop there! This is another reason why I LOVE Israel... or at least our 'small-town' We have our jewels in our village also that make me never want to move out...
Hadassah

So so glad to have found this post and found out what happened to Moshe, Sascha and all the family! I shopped at Turgeman's in Bayit Vegan for years. I followed them to Kiryat Yovel, even though it was really inconvenient for me. I went away for a while and when I returned, they had disappeared! You don't know how much we in Bayit Vegan still miss them - and I'm glad to know that you are appreciating how lucky you are to have them. Wishing them all the best! Pls let them know many of their old customers in BVegan wish they were still here.