Hot off the press! 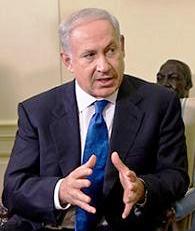 Displaying his vaunted talent for diplomatic discourse, Prime Minister Benjamin "Bibi" Netanyahu today claimed to have solved the looming construction freeze crisis a week ahead of the date the 10-month freeze was originally scheduled to end.

Mr. Netanyahu has been hinting at a compromise that would somehow manage to placate both the Arab and Western governments and media on the one hand, as well as staving off rebellion from his own party on the other.

The announcement was made in time for publication on Friday morning that there will be no extension to the freeze.  However, the following parameters for continued construction in the West Bank -- and indeed, all over Israel, in anticipation of any further demands by the Palestinians -- will be as follows:

Temporary dwellings with three or four makeshift walls and a thatched-shade roof taken from something that grows (as per Sukkah 2a); not more than 20 amot high (Mishnah Sukkot 1a).  More details available in soon-to-be distributed Government Circular 613-2b (or not 2b). 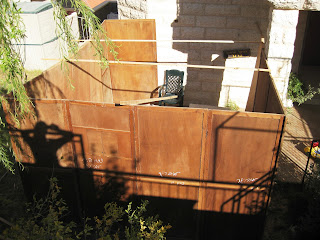 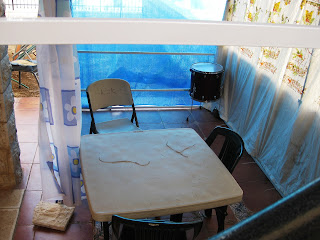 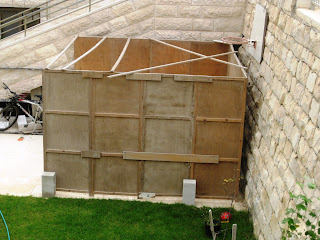 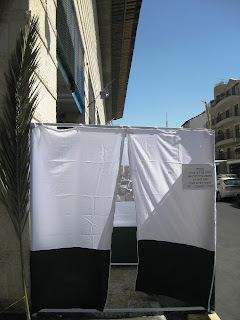 Israeli think-tanks tasked with researching this proposal determined that yearly construction of this type of structure has elicited less hostility in the past from our enemies peace partners than any other.  Therefore, there is hope that if the entire country moves to this style of construction -- the flimsier the better -- there will finally be peace in our time.

This post produced with the able guidance and assistance of the Dearly Beloved.
Posted by rutimizrachi at 19:01

Actually hadn't thought of sukkot.. I wouldn't be surprised if there was a kerfuffle from Peace Now because of them.

All I can say is Hah!

Shavua tov and shanah tovah to you and your family!

Ruti, forgive me for using your blog but...

Major tiyul on the 1st full day of chol hamoed sukkot (Sunday) to the Shomron, ending with a rally in Revava. That is the day the building freeze officially ends. Buses from all over the country. 30 shekels per person.

You're so kooky, I love you!

The trouble is that this is a variation of the old joke in the diaspora:

After a Jew builds his Sukkah, a policeman issues him a citation for building code infringement and hauls him to court. The wise judge gives him ten days to tear down the "illegal structure." The Jew happily goes home to celebrate Yom Tov and the Sukkah disappears without a trace nine days later.

I hope the binyan adei ad in Israel is for the long haul.

I love seeing all the sukkot in Israel. Thanks for your blog, Ruti