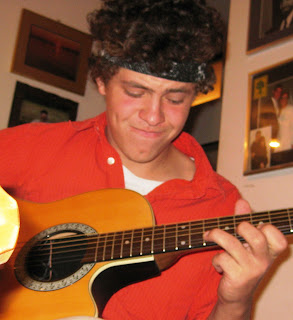 Last night was another special night at Casa Mizrachi.

Part of what made it special was that our kids could have gone off with their friends to any of various bonfires throughout the land, as Israelis fulfill the holy rite of torching our own country in honor of Shimon Bar Yochai.

Instead, Sports Guy and the Stunt Man stuck around and played music with the 'rents.  The Dearly Beloved's band, "The Strung-Out Quartet," graciously allowed us to play along with them, as we entertained a steady flow of guests from 9:30 PM until just before midnight.  Even after midnight, there was a nice little blues jam session.  Just family -- and particularly poignant tonight.

Stunt Man gets called up for service in the IDF in a couple of days.  So every moment with him has taken on a heightened degree of sweetness.

This morning, he had to report for a final medical check-up, to determine what his ranking will be for the various jobs in the military.  He was very anxious for a high rating, as his goal is to be fit enough for one of Israel's elite combat units.

"The place was full of kids, of course," he relates to us, upon his return, "and they were all talking about how hung-over they were [from the night's celebrations].  One guy said, 'I haven't slept in like 27 hours.'  I felt great, because I got to bed at a decent hour."  He looks smugly pleased with himself.  His parents utter a silent prayer of gratitude that, for this time at least, peer influence didn't win out.  "I scored 97," he says proudly.

Stunt Man adds to my education regarding the dry humor of Israelis.  "Ema, 97 is perfect.  You can't get any higher unless you're uncircumcised."

After I finish begging his pardon -- because you don't always know when Stunt Man is kidding -- he explains.  "I heard that when the British ruled here, they said that Jews were imperfect, because they were circumcised.  So the highest score a Jew could get was 97."

I snort at this, one more remnant of pompous British rule, still left lying about from the 1940s.  "What?  They never abolished that rule?"

People frequently ask us how we feel about our kids going into the army.  Or they say remarkable things like "Are you going to let him go in?"  (The latter always tickles me, because I wonder how people can continue to live in the fantasy world where they can make an 18-year-old do anything he doesn't want to do.)  Or they say truly bizarre things, such as "Oh, you guys probably aren't worried at all, since you are former military."  (To that, my husband is very likely to launch into how hard it can be to know exactly what an M16 round does inside of the human body...)

I try to explain that the parents of soldiers try to put their feelings behind closed doors.  Call it the "Fear and Trepidation Closet."  I can't tell you that I never visit that small room, filled with dark and terrifying emotions.  But I think it's healthy to visit it very rarely, and to keep a strong lock on the door.  You can't conquer these concerns.  The most you can do is to corral them.

So right now, we're savoring his company, his music and his unique sense of humor.  We're basking in the warmth of his pride at making the mark he has set for himself.  And we are allowing ourselves to feel intense pride in his decisions and desires. 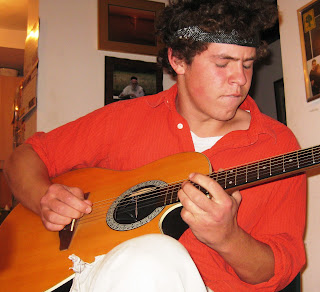 Glossary:
Lag B'Omer: the 33d day of a period of semi-mourning, culminating in celebrations including bonfires, barbecues and music
Posted by rutimizrachi at 13:01

ITs wonderful when a jew does the right thing.Hashem should watch over all our boys.How sweet he is. love Baruch

May you continue to shlep nachas from this, and all of your other, amazing boys. We look forward to following Soldier #2 on his grand adventures and to keep him in our davening as he protects us in this amazing nation.

Nice posting! I hope I never said any of those things to you, but, I think I said something about "you, guys, being in the military.....".(hopefully not). Sorry we couldn't make it; hopefully next year we'll be there. Rock on Aryeh..you're the man! B'ahava and B'vracha

May Hashem watch over your 'soldier boy' and all our other brave young men and women who defend our holy country with love.

Moving post Ruti. May God watch over him now and always.

Sussmans: I know your prayers are deeply meant, as you have a vested interest in your babysitter getting back safely. ;-)

Sandra: You so never said anything like that! We are looking forward to having you join us next Lag B'Omer.

IlanaDavita: Thank you for the compliment. Amen!

May he have a giyus kal v'na'im; may Hashem watch over and protect him and all our chayalim; and may they all come and go safely and l’shalom.

'Shkoach on the 97, my dear nephew, and the good sense and foresight it took to earn it. Ema, I can still see the lion-hearted one racing around the house with his plastic guns. May Hashem embrace and shield him always in His special light of protection and grace. I am very proud of our precious 'stunt guy.' I look forward to hearing good news.
Love,
Tanta Shalomis

G-d keep him. And all of them!

I've been saying to everyone whenever the subject comes up that, since Hashem did not bless us with sons to lend to the army, we MUST adopt a chayal boded as soon as we get there. You, my friend, are well over your quota.

We are very proud to add Soldier Boy 2 to our special prayers. Israel's Army is lucky to get him.

lovely post! i love that your son stayed home, i love that you all "jammed" together, i love his pride and your honesty. 97% indeed! thanks for sharing this.

I'm feeling very proud of Aryeh despite what lurks in our closets. Good for him for his high aspirations and attainments. May he continue in his aspirations and accomplishments for a long and healthy life, ad meah v'esrim, bringing unlimited yidishe nachas to his dear parents well into their rocking chair days, ad meah v'esrim. How powerful are our prayers for those we so love...

I'm often left with emotions deeper than words after reading your blog. I feel like letting you know but find it difficult to place oceans into teaspoons. Especially when I'm not exactly sure what each wave means.
Reading all these comments calms me. Your other readers will tell you.

Thank you to everyone for your beautiful and thoughtful words, and for your blessings.

Sabra, when you write your book, "Oceans In Teaspoons" would be a great title! Thank you for feeling so much, and express more in a word than you think you do.