"Our lives are filled with choices. I chose to expect the best."

Yom rishon, 24 Cheshvan 5771.
It was a lovely morning for an engagement party, the last time I saw RivkA bat Yishaya, a"h, alive.

Her sister-in-law's daughter was getting married.  I was so moved by the speeches given by the kallah's sisters in her honor.

Even though I had seen RivkA at this same home only a few months before at her niece's bat mitzvah, it did not occur to me to think about seeing her at the engagement party.  I remember looking around at all the guests, drinking in the simcha.  My eye kept being drawn to a beautiful, graceful woman in the center of the circle of chairs.  She seemed to be sitting by herself -- not just apart from the people, but from the place and time.  I felt as if I ought to know her, but couldn't quite place her.  After a while, I sort of forgot about her, and went on enjoying the gathering.

"Aren't you going to say hello to me, Ruti?"

The question had come from the beautiful woman.  Somehow, seeing her face in the motion of making words, I recognized her.  RivkA!  The last time I had seen her -- indeed, throughout the duration of our brief friendship -- her face had been very round from the side effects of chemotherapy.  She was always jovial, a little argumentative, in the friendliest possible way, full of an almost defiant joie de vivre.  Now she was slim and quiet, a bit tired, otherworldly.

We chatted a bit, about her niece's simcha, about our children, about blogging.  Then we sat together, as we always did, the few times we ran into each other "in real life," without speaking too much.  Companionable silence with RivkA was as special and warm as conversation with her was.  As was said at her levaya, RivkA never let anyone feel unimportant, and she never let anyone make her feel small.

RivkA was a life-impacter to anyone who encountered her.  How did she add to your life?

RivkA ("with an A") has affected my life profoundly, as she has affected the lives of so many others.  I am a better blogger because of her.  I have learned to listen more sympathetically to the genuine struggles a feminist scholar must endure to balance her sense of self with the conventional understandings of a woman's role in Torah.  I have become a better debater on behalf of my views, political and religious.  I do not know if I am any braver in the face of cancer.  I think it still scares me witless.  But I admire that she was able to persevere with such grace under fire nuclear holocaust.

Eleven days ago, I got the first message from a friend that things had moved to a precarious place for RivkA.  A friend in the "blogosphere" began arranging a mishmeret for her, so that all of her friends could have the opportunity to say Tehillim on her behalf, to storm the Heavens to try to change the decree.  Another friend took over her blog, updating concerned readers about her status.  Someone else arranged visits and help for her family while she was in the hospital.

I contacted a friend who I knew would be able to listen, and could give me some psycho-emotional counseling.  "How do I get past this feeling that I am sitting on yet another death watch?"  I asked him.  I have seen a few miracles.  I wanted our Tehillim to change the natural course of events.  I just didn't want to give RivkA up -- and I felt guilty for having doubts that she would make it out of this terrible stage of her battle.  He reminded me that Hashem expects us to ask for His help on behalf of others, but that He also instructs us not to rely on miracles.  At the end of days, we will know exactly how much value each prayer and tear had.  Nothing on behalf of another Jew is wasted.  But we must also trust the True Judge to know what He is doing.

Taking RivkA bat Teirtzel off of my davening list is one of the hardest things I've had to do lately.  Her incredible courage and optimism strengthened my belief in miracles.  I just knew that the only way she was coming off of that list was for the best reason possible.

RivkA participated in bringing the Moshiach nearer.  I know this, as I know that increasing the wattage in the light bulbs in my house brightens the darkest corners.  I will miss her so much.  But the light will continue to shine, from her beautiful family, from her writing that will carry on her message of hope and optimism, and from the countless people whose lives she enhanced.

Note to fellow bloggers, and RivkA's friends in Israel:  In honor of RivkA bat Yishaya -- let's a bunch of us get together soon and go to a movie. We could laugh and be rowdy. No talking during the movie, and pizza afterwards. 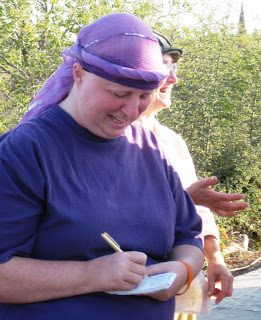 May the family of RivkA bat Yishaya be comforted among the mourners of Tzion and Yerushalayim.

Glossary:
Kallah: bride-to-be
Mishmeret: prayer circle on behalf of someone who is ill, literally from the word meaning "to guard"
Tehillim: Psalms
Posted by rutimizrachi at 10:43

count me in. and let's all wear purple.

This is a beautiful post Ruti and you echo a lot of my feelings here. It is amazing to see how many of us have been impacted and inspired by RivkA's words; may her memory be a blessing.

thank you for this beautiful post. I had read the blog "RivkA Matitya's inspiration" in JPost on Friday morning, and clicked on RivkA's actual blog from there only minutes after her passing was posted. What a loss to the world. Though I am sure that her memory will be a permanent blessing.

"In honor of RivkA bat Yishaya -- let's a bunch of us get together soon and go to a movie."

She surely will be missed down here!

"RivkA never let anyone feel unimportant, and she never let anyone make her feel small." I really felt that from her. I never met her in person, but when we met MominIsrael aka Hannah in person a few years ago, she said RivkA sent regards. Did she even know me? I guess she did!

In our sephardi synagogue, we have a custom of saying a prayer for the deceased right before the prayer for the sick. It eases the pain slightly when you can move your misheberach to a different spot in the tefila and not have to totally drop it.

Comfort and warmth to you in your loss. Clearly, she touched so many.

Oh Ruti, you couldn't have said it better. I'm not even going to try.

I'll miss her so much!

I looked for you last night, but in the crowd it was all hashgacha who got the hugs....

Beautiful post :-) We should all be so fortunate to be remembered with so many positive feelings.

She didn't "give up" Ruti. Sometimes HaShem has a cheshbon that only one of us can fill. RivkA was that special woman.

We go into our courageous stances not knowing there they're leading or why. But we decide to be strong as the alternative - to fall apart - is terrible. We know in our guts that HKBH has valid reasons for stuff we'd rather not endure. We choose to cooperate, though tears will fall.

Yes, we ride an emotional seesaw from sickness, daily stuff, name the difficulty. We're normal humans facing the unexpected, The Unknown, as best we can given the circumstances.

Torah life teaches us that in Heaven there are no questions, no doubts. We'll get there, too. Hang on. And hang on to reassuring friends/family.

In every one of your photos RivkA wasn't smiling - she was beaming, a face full of love, happiness and joy and that is how I will always remember her.

Your post is beautiful and if you happen to be going to the cinema when we are in Israel (hopefully in the Spring) then we'd love to join you all.

The rain woke me up three separate times on Friday night. I couldn't help but think that she had something to do with that particular bracha to the land she loved.

Thank you all, for beautiful comments that have strengthened me. I had to add this one, from a private email (with permission):

"This is a sad time for her children and husband and all Jews everywhere. May we go from strength to strength and may she inspire us to reach higher heights of spiritual greatness. May her children cherish her memory and may her love continue to embrace them even as she physically is not with us.

"May we all see with our own eyes the miracles she did not live to see yet.

OTE: When I went to take the dog out, I got drenched, and I felt exactly the same - like it was a bracha she sent us.

There's something very cleansing about crying in the rain, too...

This is a beautiful tribute Ruti. RivkA was an example to us all. May her family be granted comfort. I'll wear purple today for her.

My sister died of ovarian cancer this past September. When she was first diagnosed eleven months earlier and started chemotherapy we talked about 'cancer blogs', and the immediate first blog to come to my mind was 'Coffee and Chemo'. My sister was amused by the title.

May both my sister and RivkA be counted among the souls of Zion.

I'm sorry, Shtark. I didn't know. I have been davening for her all along. May you be comforted, dear friend.

Great post, although I did not ever get to meet her, my soul felt the pain of absence from your words. In such dark times we have to cluster around those rare "bright lightbulbs," to help us see where the hell were suppose to be going. She should rise higher and higher in the pleasure of the being in the Yichud room with the Most High for all eternity.

Beautiful, Ruti. I'm in for for that rowdy evening.

As regards prayers that seem to go unanswered.:
Years ago, Chedva in Bnai Brak was fighting cancer, and revolutionized the attitude of people as regards loshon hara, as people endevored to watch their tongues in her merit. Expected to live a month or two, she held out for two years.
At her funeral, her husband shared one of his wife's last comments. She mentioned that she knew that tehillim were being said in vast numbers for her. She then told her husband: If it doesn't hel[ me, it may help you. And if not you, maybe it will help the children. And if not them, then klal Yisroel".

How appropriate that three of your lovely pictures are from the bloggers' picnic which RivkA z"l herself initiated, organized, and arranged pretty much singlehandedly.

Count me in to the get-together too!

Beautifully said, beautifully written. I could so feel your emotions in your post.

Ruti -- such a beautifully written post. Thank you so much for sharing your thoughts with us.

Whoever remarked that RivkA, z"l, is beaming in these pix is spot on. Come to think of it, wasn't she like that in all the photos? What a captivating smile.