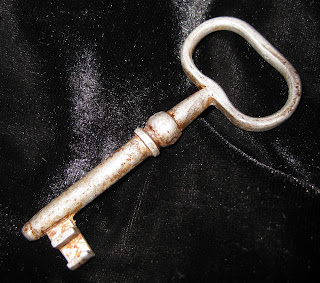 There is a beautiful custom, taught to me by my beloved Rabbi Menachem and Rebbetzin Bracha Goldberger, to put a key into the first challah after Pesach.

There are many explanations given for this custom.  Rabbi Yehuda Prero says, "The 'schlissel,' which is the Yiddish word for 'key,' should unlock the gates of sustenance for us just as it was for the nation of Israel after their first Pesach in the promised land."   Others mention the key as a symbol of "opening a small hole, like the eye of a needle," by keeping Shabbat and taking challah -- and these mitzvot will help to "remind" our Father in Heaven to open His storehouse of blessing for us.  Still others mention that the counting of the omer is a time when gates in the Supernal Realm can be unlocked, if we but have the right keys.  I refer you to an excellent post on A Simple Jew's blog from 2007, wherein "A Talmid" did detailed research to offer many different explanations.  My friend Sheina bakes her challah in the shape of a key.

Photo from Yeshiva World News
The key that has been used as our schlissel challah for more than a decade has been in my mother's family for several generations.  And so we keep the sense of tradition alive, even within a family building its traditions much as we build our challah -- from scratch.
Today I plan to fulfill the mitzvah of taking challah in the merit of all those who so desperately want to bring new life into the world.  I have not received permission to mention any names, though there are (unfortunately) several on my list, just as there probably are on yours.  I do not know if this is true -- but I believe that if we add to our personal lists the desire to add the names on each other's lists, Hashem will count our brachot as if all of the names were shared.  Please have all of these dear potential-parents in mind for healthy babies, b'sha'ah tova!
May we share a year of abundant blessing, joy and contentment.


Glossary:
Schlissel:  Yiddish for "key"
Challah:  special bread baked for Shabbat
Taking challah:  a mitzvah to remove and destroy a small portion of the challah dough, as a reminder of the portion given to the Priests during Temple times
Counting of the omer:  a larger subject than I can explain here -- but a time of spiritual growth between Pesach and Shavu'ot that takes 49 days of counting and introspection
Supernal Realms:  Don't even ask.
B'sha'ah tova!:  [Lit: at a good hour]  At the right time, and with ease!

Thanks, Ruti. May all of B'naei Yisroel be granted an abundance of Bracha this season and always.
Shabbat Shalom.
Barry and Caren & family

Ruti, many Brachot to you and yours and for Klal Yisrael!

Such a cool blog! I recently started a frum tznius fashion blog...thanks for this great post!
http://www.fashion-isha.com/