The Nes of the Nachash 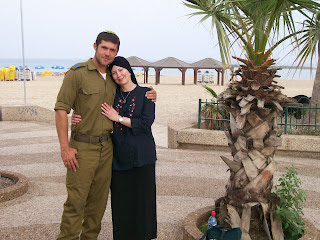 My son did not die last night. Baruch Hashem!

Soldier Boy was sleeping in the field with his unit. He got up from his bedroll to help with about a half-hour of guard duty, and then went back to his tent, exhausted, as usual. He flopped down, and was sleeping again, probably before his head had quite hit his rolled-up jacket/pillow.

The next morning, while shaking out his jacket, he discovered that he had been sharing space with a poisonous viper. Fortunately, the snake was happy to finally escape from under the pillow, and my son was too busy yelling and jumping around, for their face-to-face to be fatal. (At least for the human. From all good field operations blossom into public view at least half a dozen latent snake killers. My son's erstwhile bed-mate is now a belt or a hat-band.)

Soldier Boy called to share the miracle. We discussed some tzedaka he had recently given to a poor old Yerushalmi. "Ema, I dreamed about Rabbi Akiva's daughter last night. Weird, huh?" I remembered the story with him. On the day before her wedding, Rabbi Akiva's daughter had fed a poor man for whom everyone else had been too busy. That night, she stuck her hairpin into the wall above her bed. In the morning, it was discovered that her hairpin had skewered a poisonous snake. Rabbi Akiva knew that it was her act of kindness the day before that had saved her life.

We reminded our son to bentch Gomel, to publicly thank Hashem for saving his life; and we gave our yishuv rav extra tzedaka.

Later in the day, we got another call. "After we checked the inside of my jacket, we made another discovery," said Soldier Boy. "Either I was sleeping with a stapler -- or that snake was trying to bite through the fabric all night."

God was surely watching over him. We thanked God for that and also for modern fabrics!

Wow! What a story! I can't wait to share iti with my kids. We thank Hashem for his nisim shebichal yom imanu, that are with us every day. When a person has sucha miracle happen, that nes is with him every day, that knowledge of how important he is in G-d's eyes can be with him always

Baruch Hashem.
We never know what simple kindness could save our lives.
Keep up the good work.
Hashem loves you.

wow, H-shem was/is watching over our young man. This shows us just how special he is.

Blessed is He who is is good and does good! Thanks so much for sharing this story. May we all continue to experience Hashem's hashgacha b'galui!
Devra

b"h, ruti. joshua is destined for unusual greatness in his marriage and adult life. the miracle is a sign. may hashem continue to shine down upon him, his new wife, parents and brothers. amein.

Wow!! Ruti, I have to show this post to my son, who needs to be reminded Who is running the universe every now and again.